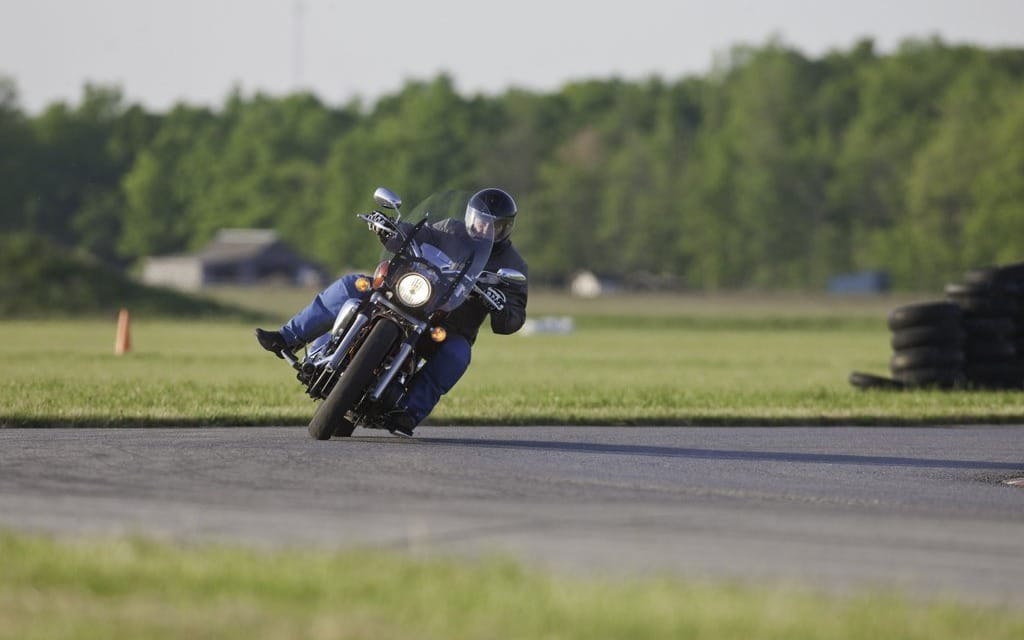 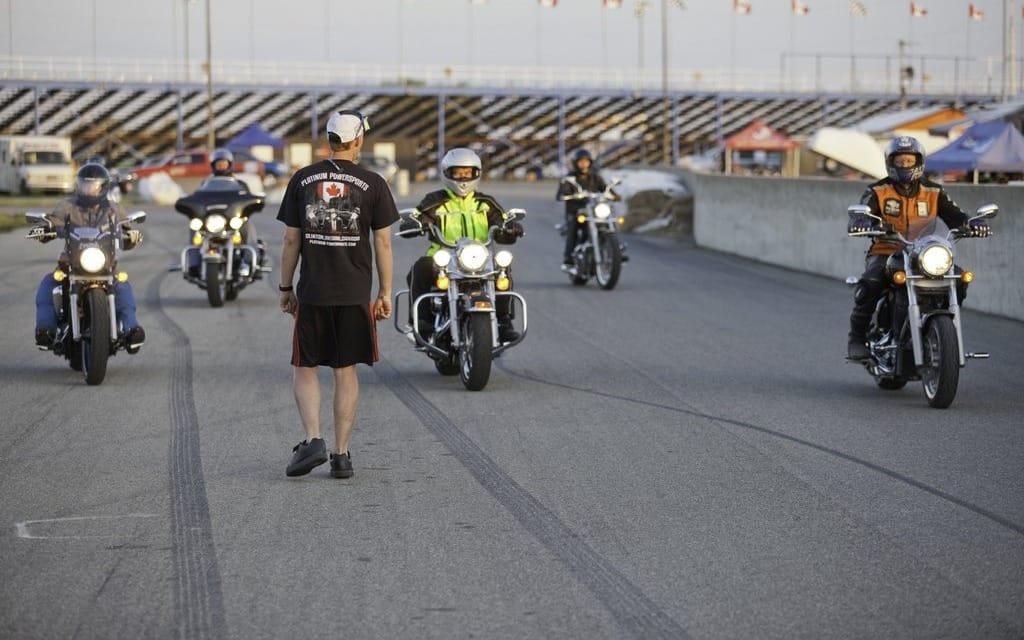 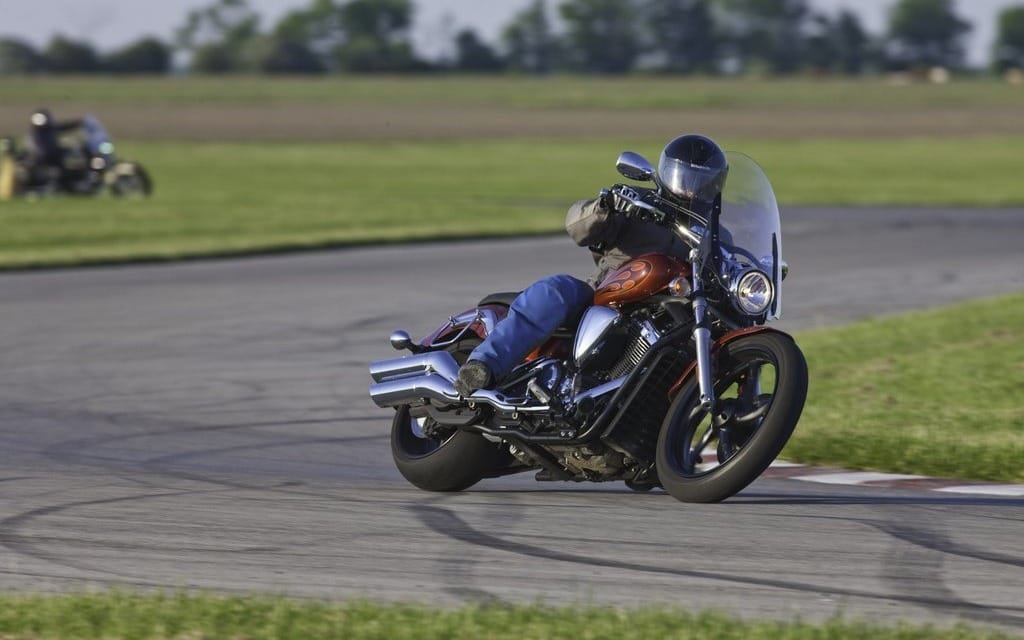 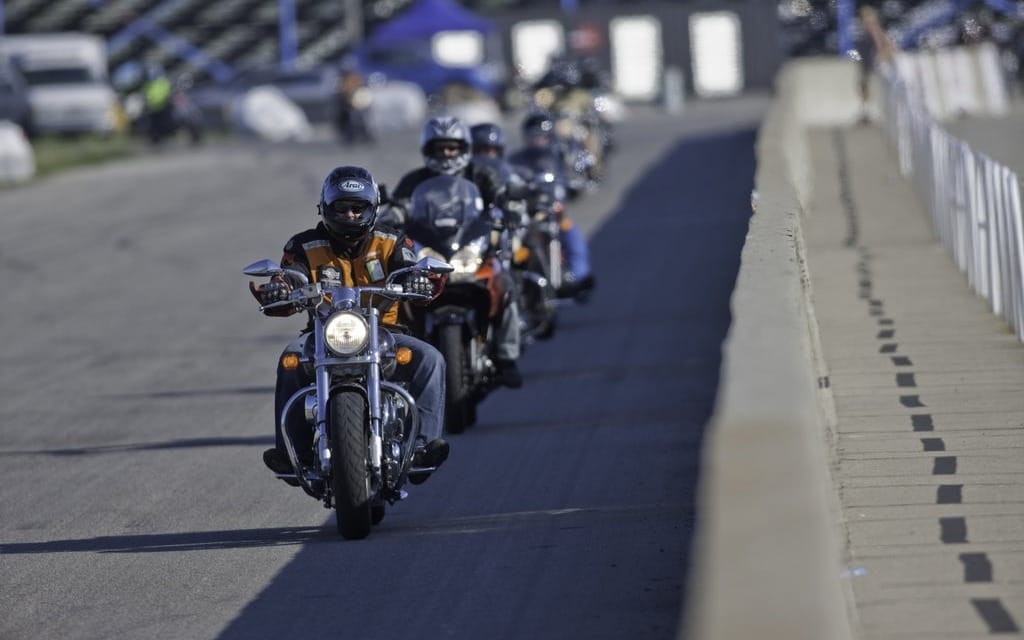 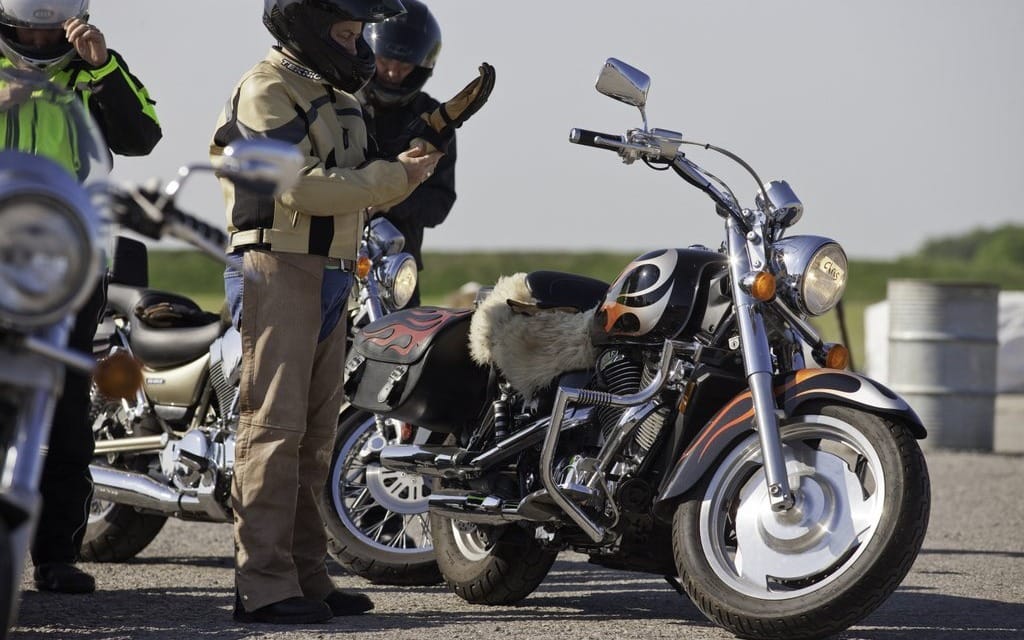 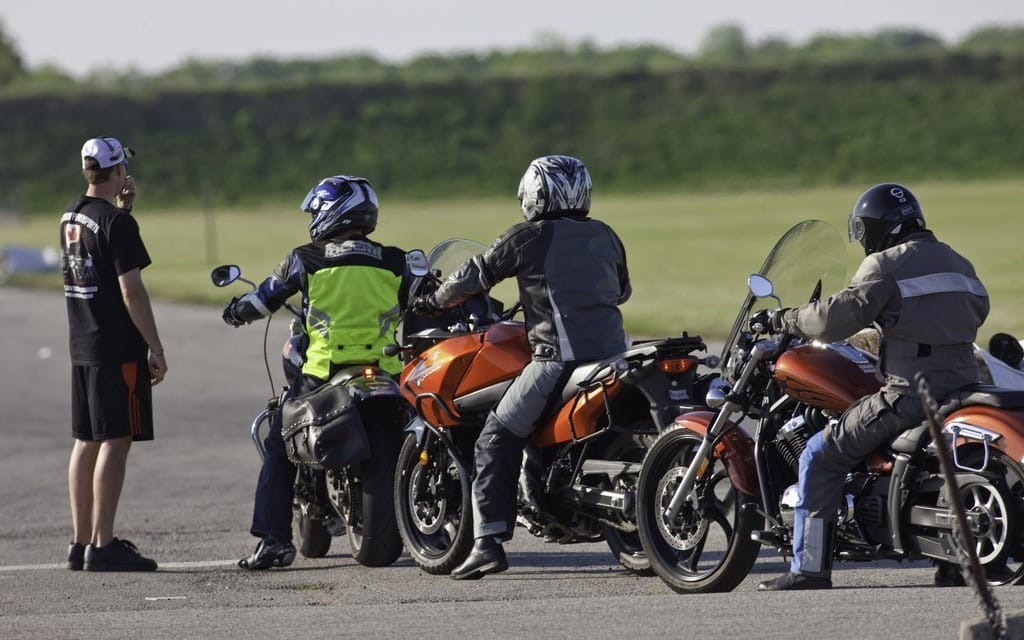 Hanging Off A Cruiser

Stryking out on the race track

Yes, you can hang off a cruiser, but that won’t make it a sport bike

It’s not easy to hang off a cruiser, I say to Donald Broadfoot. The racetrack at Cayuga glistens in sunlight, and half a dozen students mingle near its entrance, enjoying a cool breeze after a few hot laps. There are chaps, Harley-Davidsons, a Honda Shadow, a Suzuki V-Strom. A ratty Honda Magna. And a Yamaha Stryker, which I have ridden to Toronto Motorsports Park — formerly known as Cayuga — in southwest Ontario. I suggest to Broadfoot that it’s a lot easier to hang off a sportbike, because your feet are under you instead of out there by the front wheel.

“True,” he says. “It has merit, though. And I can guarantee you that none of these guys will ever try it on a sportbike. At least now they know what can be done.”

We started out tentatively, cautious on these 700-pound motorcycles as we toured the race course where Broadfoot was conducting a program called “Surviving the Streets.” He’s a young-looking 38, owns Platinum Powersports in southwest Ontario, and has been riding track days for 18 years and teaching people to ride motorcycles for 12. This course is a track day with lessons, for cruiser riders, but he also teaches something called “Intro to Track,” for sportbike riders.

Before we get on the bikes, Broadfoot gathers us in a small room next to the dragstrip and explains what we’ll do. There’s a braking lesson, a swerving lesson, and then some laps around the course. We’ll be hanging off and counter-steering, which he explains with the help of a grey-haired and cheery assistant. “Does anybody know what counter-steering is?” he asks. A student says push right to go left, and Broadfoot grimaces. “Uh, that’s the idea, but you have it backwards.” The student says turn the handlebar right to go left, and Broadfoot nods. “Okay, I see what you mean.” He has the assistant pretend to knock his feet out from under him; the feet go right, his upper body falls to the left. That’s counter-steering. Hanging off is another matter; it changes the balance of the bike, so you don’t need to lean it over quite so far when you turn a corner. Get one butt cheek off the seat, in the direction of the turn you’re making. He is talking to people who have never considered getting a cheek off the seat, who have probably been taught push-steering, but for whom the techniques of riding on the track are foreign. Explanations are kept simple, and as we file out of the room, he asks us for a number: the fastest speed you’ve gone on a motorcycle. Most of the responses hover in the 140 to 170 km/h range. He has also asked us to show a hand if we’ve ever scraped a footpeg. One hand is raised.

Later, we watch as instructors demonstrate the braking practice. On the long front straight they accelerate into third gear, and when they reach a set of traffic cones, they shut down, gear down, and brake, getting stopped at another pair of cones. After a few more demonstrations, we do it, one by one, and it’s hard braking, but not hard to do. The Stryker is a very long motorcycle and brakes very effectively with its single front and rear discs. I ride between the first two cones, shut it down and get it stopped from nearly 100 km/h at the second set of cones without difficulty. I even remember to downshift — which is important, because when we get stopped, we will look quickly over both shoulders, then accelerate away, remaining stopped for the briefest time possible. We’re practising for a busy highway, getting stopped quickly to avoid some obstacle, then going quickly to avoid becoming someone else’s obstacle.

The swerving lesson follows. It involves the same two pairs of cones, but a third pair is put down between the first two and moved sideways. We will accelerate to the first pair, hold our speed and swerve to the right to go around the offset cones, then turn back in, shut down, gear down, and stop at the last set — so we’ve jinked around a refrigerator on the highway and stopped behind the pickup that dropped it. Our braking distance is cut in half by the need to jink, but the instructors who demonstrate it use lower speeds, maybe 70 km/h, and it’s an easy manoeuvre. Feeling challenged, I push my speed up on the next go, and at 100 km/h it’s difficult to get right; it’s hard to swerve that quickly and by the time I get the Stryker turned back in, I’m almost at the last cones. I get stopped about where the pickup driver would have been sitting.

Next up, hanging off, and practising steady throttle through the turns; Broadfoot has an instructor demonstrate the wrong way and the right way, and you can hear the engine changing its note as the rider tugs the throttle while turning. Then Broadfoot picks on me; he wants me to go through the same two curves, hanging off, while the others watch. I do it a couple of times, scraping a peg most of the way around each curve and hanging off as much as I can. Lesson completed, we are sent off to ride the track, practising these things we have learned. Broadfoot doesn’t speak to me, doesn’t tell me why he picked me to demonstrate something, and later, when I ask him about my technique, he has some complaints: I did it all wrong. I was jerky with the throttle, I didn’t hang off enough or get my knee out, perpendicular to the plane of motion, and I missed an apex. He informs me that if I had gotten down more and stuck that knee out, perpendicular, I would not have scraped anything.

But it’s hard. The Stryker is a long cruiser, and its footpegs reside in front of the rider, so your legs are stretched out. In that configuration, they provide no support for movement of the lower body; I find the act of lifting my butt and moving it over requires a lot of muscling in the arms, and if I get really hanging off (objectively speaking), my outside foot is nowhere near that up-front footpeg; it’s dangling.

That doesn’t matter: as Broadfoot (and others, including American teacher Lee Parks) points out, racers go around corners all the time with the outside foot almost completely off the peg, and it doesn’t slow them down.

And it’s uncomfortable. The Stryker’s handgrips are thick, the handlebar is wide, and the seat is large. These are good things for a cruiser going around a modest curve; for a cruiser screeching a footpeg all the way around a curve with the rider’s ass as far off the seat as he can make it, these are not positive attributes. The Stryker, in other words, was not built for a hanging-off riding style.

So I try a few curves without hanging off, and as Broadfoot might have predicted, the bike leans more, uses up its ground clearance sooner, and becomes less stable at similar speeds. So, hanging off is not easy to do, but it works, even on a cruiser.

Following one of the instructors on Broadfoot’s Honda Magna, which he has modified with VFR front end parts and other components to make it behave on the track, I find it difficult to match speeds, but I notice that the Magna has more clearance than the Stryker, can run a corner faster than me without touching anything down, and the rider in front of me does not seem to be hanging off any more than I am. So I try harder, which leads to uncertainty.

There are some corners where the footpeg drags harder than in others, and I’m trail braking deep into them, as well. Once or twice, as we circulate this track at Cayuga in the hot sun, I feel something unsettling under me, some extra dig from a footpeg into the ashphalt, and so, finally, I call it quits. I don’t want to bang up this Yamaha, and I’ve learned enough for this day.

So, too, have others. After the track session, we gather in a windowed room and, between explosive timing runs on the drag strip right outside, we talk about what we’ve been through. Other students say they’ve had an experience they might not ever have sought out, pushed themselves in ways they didn’t know they could. Broadfoot wants them to tell me what they think, because a story in Cycle Canada is good marketing. It’s hard to sell this course to cruiser riders, who are generally grey-haired and possessing of years of experience and don’t want to be told they should take lessons, even though they don’t really know how to ride quickly. To swerve hard and then brake hard, to counter-steer deliberately, to hang a butt cheek in a curve, these are strange activities. But, as Broadfoot told me earlier: it has merit.