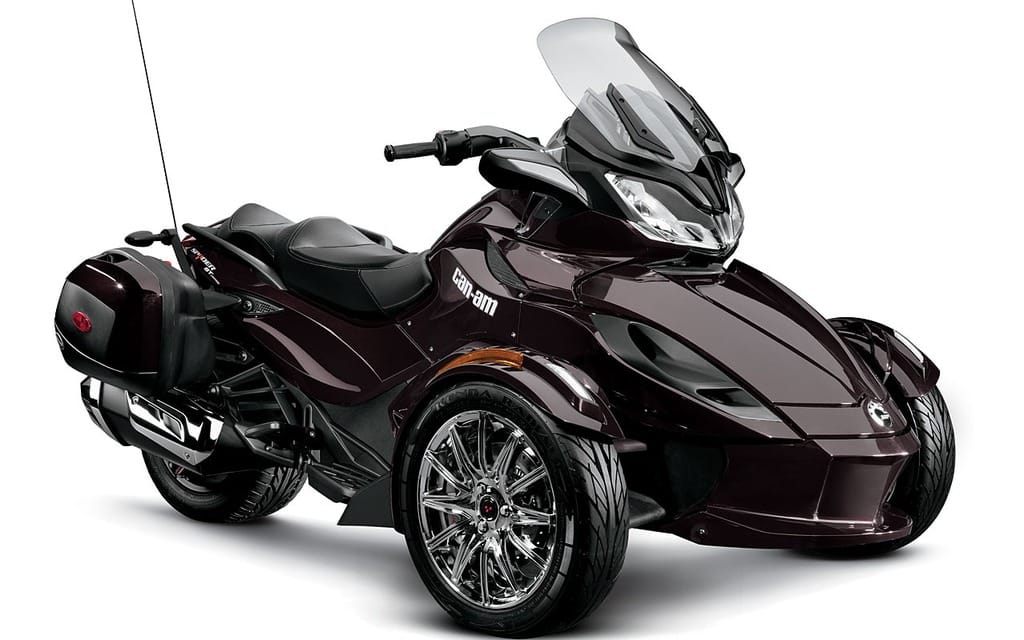 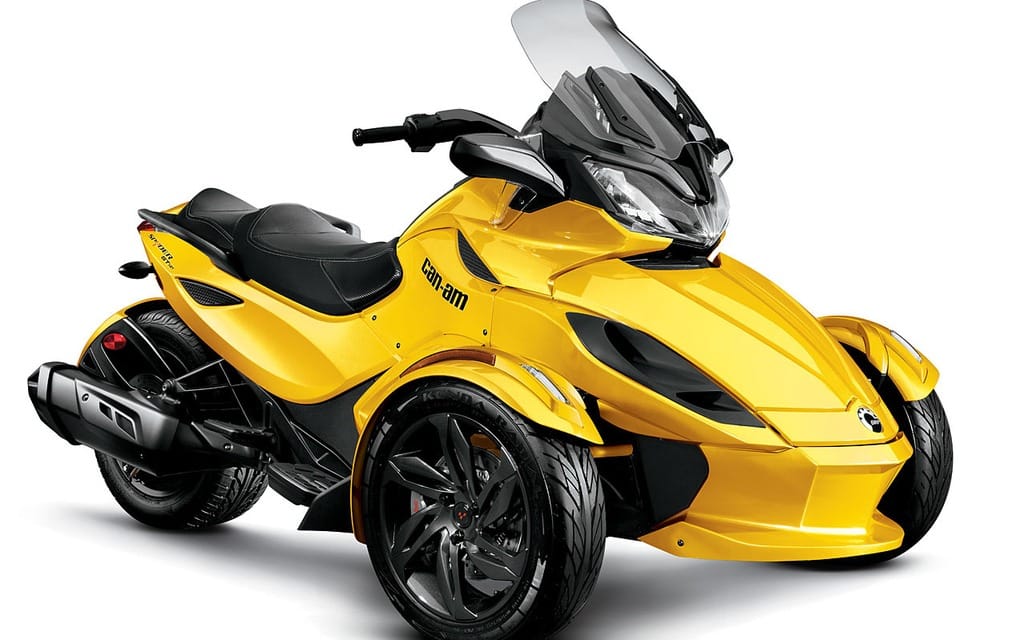 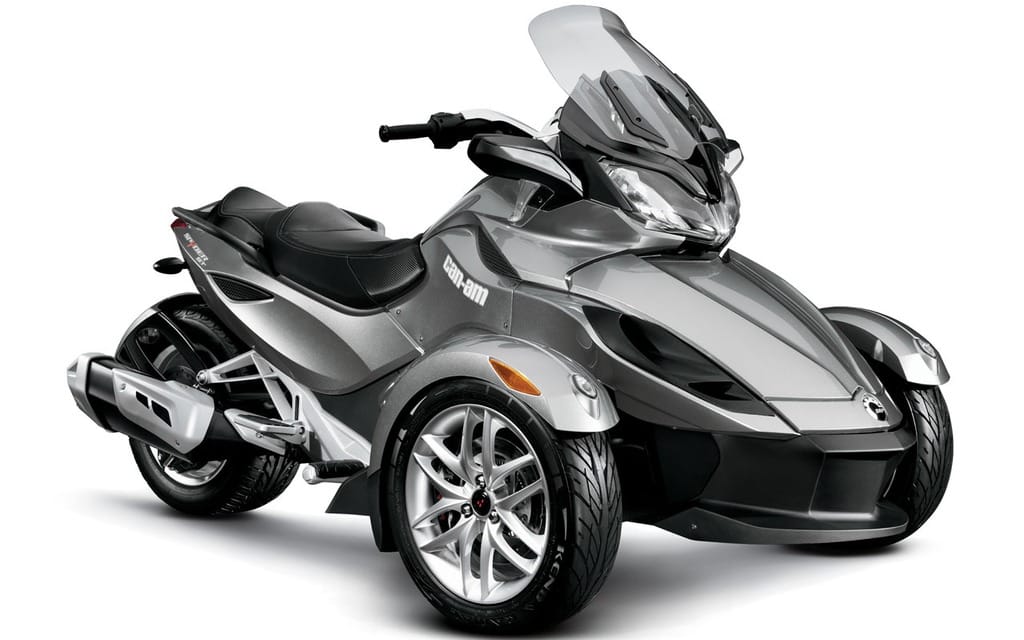 Bombardier Recreational Products launched the Spyder ST Roadster this week at their dealer meeting. New for 2013, the Can-Am Spyder ST is a sport-touring machine positioned between the sportier RS and the touring-focused RT. Its nose and front boot area bear an unmistakable resemblance to the sportier RS and the headlights and adjustable windscreen are clearly closely related to the RT. The result is a Spyder that has its own identity, while still resembling its family.

The new ST shares a common frame, engine, and Vehicle Stability System with the two other members of the Spyder family. Along with a base model, there will be the ST-S and the range-topping Limited. All Spyders are fitted with the 998cc Rotax V-twin engine which has been updated with a ride-by-wire throttle. The ST is available with either the five-speed SM5 transmission or the semi-automatic SE5.

Front-end geometry has been revised for 2013. The frame, common to all three Spyder models, has been made sturdier at the lower front, where the suspension mounts. Suspension A-arms have been revised to improve suspension geometry and on some models feature body-coloured covers on the uppers. The front wheels grow from 14 to 15 inches, but the overall height of the tire remains the same as tire sidewall height has decreased. Viewed at the correct angle, the exposed suspension arms and tire-hugging fenders look like they were lifted from a classic hot rod.

Also new for this year are Brembo four-piston calipers on the front of all models. BRP claims that braking distance has been decreased by 10% from last year’s. As with all of the Spyder models, the brakes are operated by a right foot pedal.

Limited models come standard with Givi panniers that lock to bespoke brackets. Removing the brackets is a matter of undoing a trio of quarter-turn fasteners, leaving a clean look to the rear section of the machine. Up front is a 44-litre trunk, opened from the main ignition cylinder. The Limited gets a liner for the front cargo area.  The liner and luggage are available for the other ST trim levels as an accessory.

We rode the new Spyder ST on a room-temperature fall day over winding roads in the Maryland countryside. What immediately distinguishes the ST from its siblings is the riding position. On the sporty RS version the riding position is sport-biased with the rider leaning forward into the wind coming over the standard flyscreen. By virtue of the ST’s floorboards that move the rider’s feet forward, giving an almost 90-degree bend to the knees, and a handlebar that is moved four inches higher and three inches toward the rider, the seating position is more relaxed.

Compared to previous models, the front suspension is tauter without being harsh. The Spyder has a more planted feel, especially in tight turns. Braking feels similar to the earlier models, which is to say very automotive. The brakes are effective and progressive, although they lack the feel of traditional motorcycle brakes. Any of the Spyder models can be hauled down from speed quickly.

The motor is happiest above 5,000 rpm and starts to urge the machine forward at 5,500, all the way up to its 9,000 rpm redline. Below 5,000, there is vibration present, especially through the floorboards. Lug the motor at your peril; it will give you the sense that the isolastics need shimming. Exhaust note is throaty and deep without becoming loud and obnoxious. BRP claims 80 lb-ft of torque at 5,000 rpm and 100 hp at 7,500 rpm.

The ST leavers only the rider’s knees out in the wind and, depending on the windshield position, can create a flow of air at or over the rider’s helmet. The ST windshield has five positions and is adjusted manually. It slides easily up and down and clicks nicely into each of its positions. For our tester’s five-nine frame, the middle position was most comfortable, with minimal buffeting and a view over the top of the windscreen. A curve at the upper quarter of the windscreen makes a horizontal line of distortion that can be a little distracting when the screen is in its top-most position. BRP is offering accessory windscreens: one higher and two lower than stock.

Carving through turns as the speed rises will see the VSS intervene as the rider gets too rambunctious. The VSS has been refined for the 2013 Spyder line-up and seems to take a more gradual approach to keeping the machine planted. It will still soften the engine power to control wheel spin and prevent the inside wheel from lifting in corners.

Overall, the Spyder shows refinement for 2013; more evolution than revolution. The addition of the ST bridges the gap between the sporty but unfaired RS and the fully-loaded RT. With the inclusion of this new model in their line-up, BRP offers a slate of three-wheeled machines to fit a very wide range of potential buyers. What can be next, a dual-purpose Spyder?