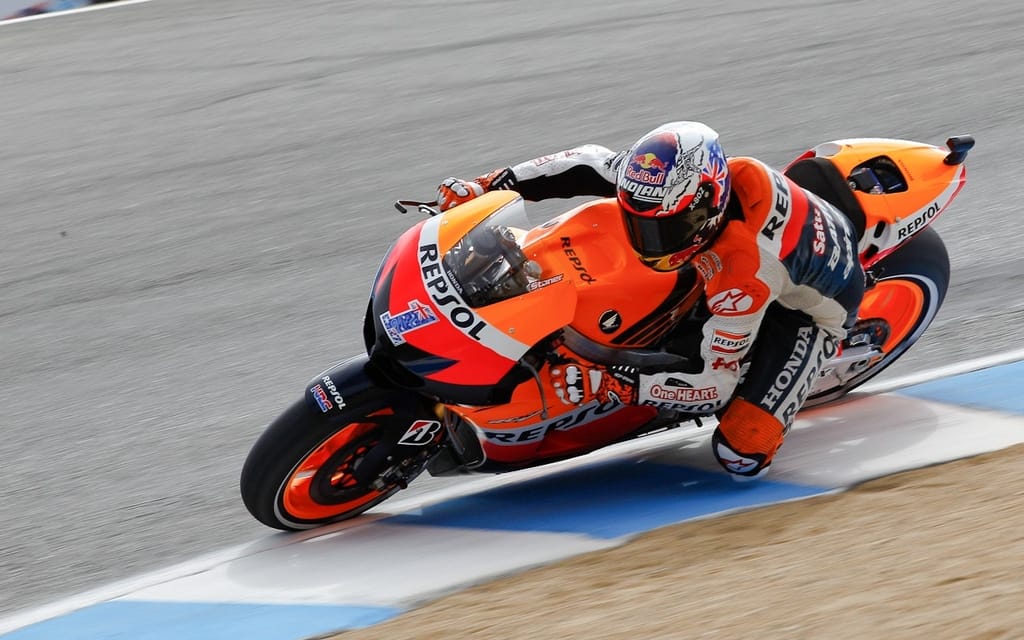 Casey Stoner passed pole sitter Jorge Lorenzo and carried on the win the United States Grand Prix at Laguna Seca today. The win closes the gap in the points standing, leaving Stoner in third, 32 points out of first place.

Lorenzo displaced Stoner from the top of the timesheet in Saturday’s qualifying. Lorenzo had a fall in this morning’s cool, foggy warm-up session, but was unhurt.  Lorenzo’s second place finish means he is still atop the standings with 205 points.

Dani Pedrosa fell back from the lead pair and ran in a lonely third place. He protected second overall in the standings and is 23 points back of Lorenzo.

Dovizioso held off his team mate Cal Crutchlow to put the Tech 3 Yamahas fourth and fifth, the same places the two riders hold in the standings.

Nicky Hayden, winner at Laguna Seca in 2005 and 2006, finished sixth after a tussle late in the race with Stefan Bradl. Hayden, who turns 31 on Monday, has extended his stay at Ducati with a one-year agreement. Sunday’s results lift him into seventh overall, with a points total that has not yet cracked triple digits.

Rossi’s day ended with a crash going into the corkscrew on the second last lap. He was unhurt after throwing the bike into the air fence. The TV coverage showed him walking around the gravel trap like C3P0 in the Tatooine desert, the whole episode a microcosm of his entire season so far.

Ben Spies was running in fourth until a soft high-side (if there can be such a thing) put him out halfway through the race. There are reports that the suspension failed; the bike appeared to be sitting low in the rear when it was righted after the get-off.

Indianapolis is next on the MotoGP calendar, the weekend of August 17th – 19th, after the summer break.