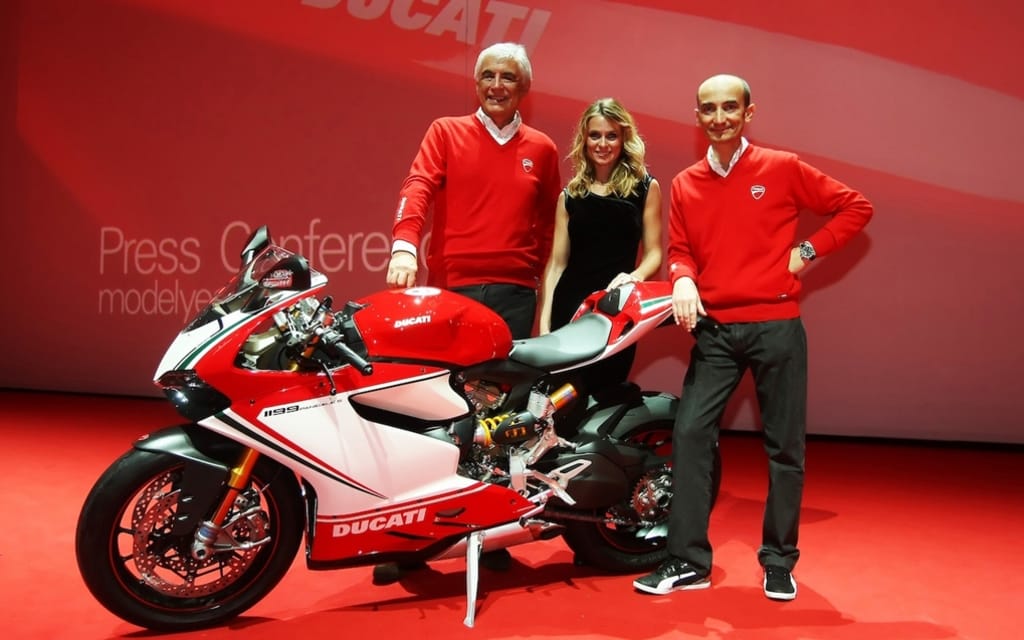 Like BMW, Ducati also had a record sales year in 2011. “It was our best year in history,” proclaimed Ducati CEO Gabriele Del Torchio, during a press conference at the company’s annual Wroom media event in Italy.

“We’ve grown 21.5%,” said Del Torchio. “These numbers are consolidated and we’ve done well worldwide and we’ve sold 42,200 motorcycles. Eighty percent of our production is exported. The U.S. is our number one market , followed by Italy and Germany with a 31% increase. In France we sold 4,100 motorcycles and in the Far East a 84% [increase]. We didn’t lay off any workers. In 2008 and 2009 instead of cutting down on investments we invested on new bikes and strategic alliances that helped us promote our brand. We understood that in Italy things weren’t going well and that we’d better look at other markets and this helped us have a great 2011 and hope for a better 2012.”

Ducati of course also had a banner year in Worldsuperbike competition, winning both the manufacturer and rider championships with Carlos Checa piloting the now nearly defunct 1198 (the 1199 Panigale won’t enter WSBK competition until 2013). The company’s prototype road racing effort in 2011 can only be seen as an utter failure though, given that its new partnership with seven-time Grand Prix champion Valentino Rossi garnered only one MotoGP podium finish (third) and seventh overall. Regardless, Del Torchio still has confidence in Rossi, saying that the 32-year-old Italian (he turns 33 in February) “remains our choice for the future.”

Ducati’s new Desmosedici GP12 motorcycle is not present at the Wroom event this week, as its GP11 precursor was last year. Rossi claims to have only seen the GP12 on the computer thus far, saying that it looks beautiful. And in his presentation to the press, Ducati Corse boss Filippo Preziosi stated that the 2012 MotoGP bike is virtually a complete redesign. “Ninety percent of the parts are brand new,” he said.

Unlike last year, Rossi spoke very cautiously, during his Wroom press conference, about his chances for winning another MotoGP championship this season:

“The championship will be difficult because the gap in 2011 was quite big. Our target is to fix problems step by step, and try to get closer to Yamaha and Honda. And from that moment on, we’ll start to work on the finer details, and be competitive for the victory. I do not want to say from the start that I won’t be able to fight for the championship, but I have to be realistic. Ultimately we have 1.5 second gap to recover, our target is to get much closer to the others and be able to race with them and fight with them. This is our goal. We know we need time, but we all work well together. And it’ll be a dream to try and win the first race, but realistically we are still too far off, but maybe the new bike is a miracle. The bike has changed a lot and Ducati has worked really hard to have ready for the first test. I’m not worried, I’m optimistic and confident. When we’ll test it we’ll know at what point we’re at and if we’ve improved. I don’t expect that the bike will immediately competitive, but I think it will be enough to know if we worked well and for this season we’ve organized a much simpler and clearer work routine.”

“I think that the first test will be important, and for sure the bike will be different compared to last year. It is impossible to be competitive from the first test, but I think we have some good information to work from and be ready for the first race. Last year was a lot worse because from the first test we understood that the season would have been very tough and difficult. After three laps we understood we could not win the first race, but now the situation is better because I am fit. I’m physically in shape now and we have another two or three weeks ahead of us. I am ready for the first test. It’s nice working with Ducati, but unfortunately the results were below our expectations. The atmosphere is nice and we all believe in what we are doing.”