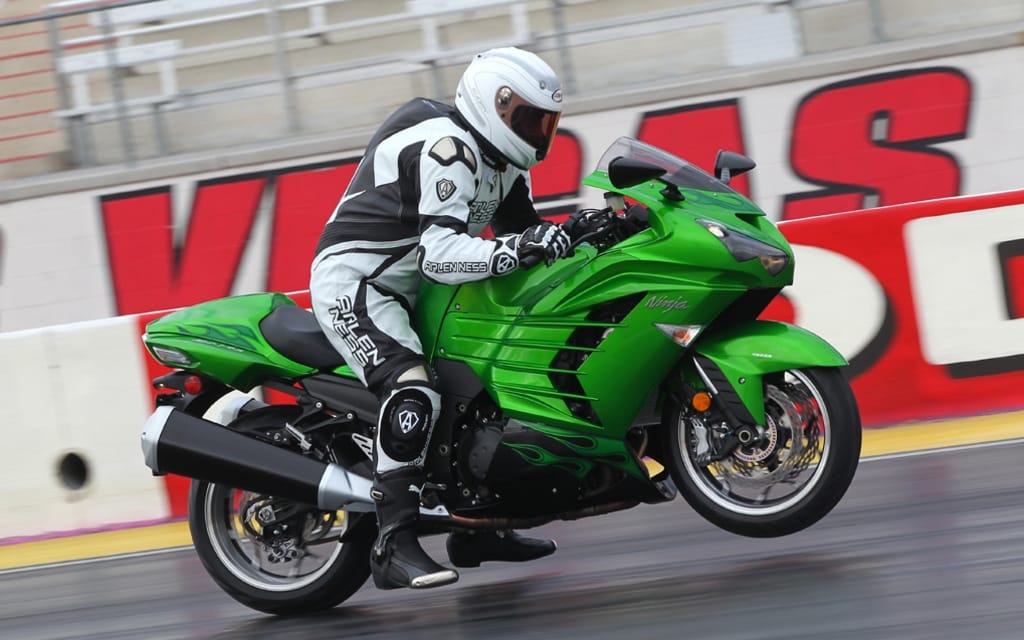 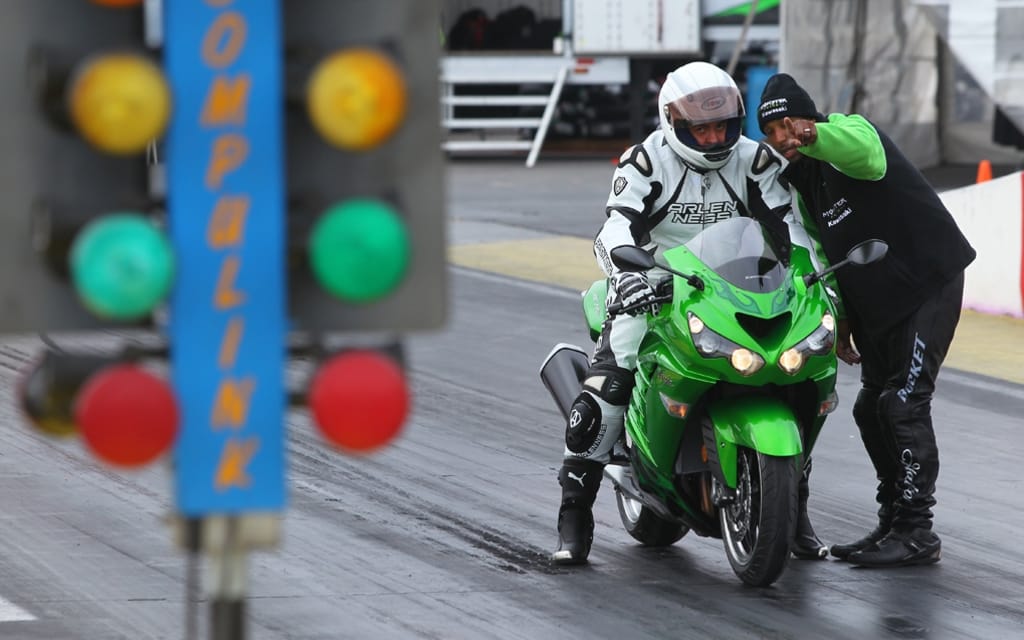 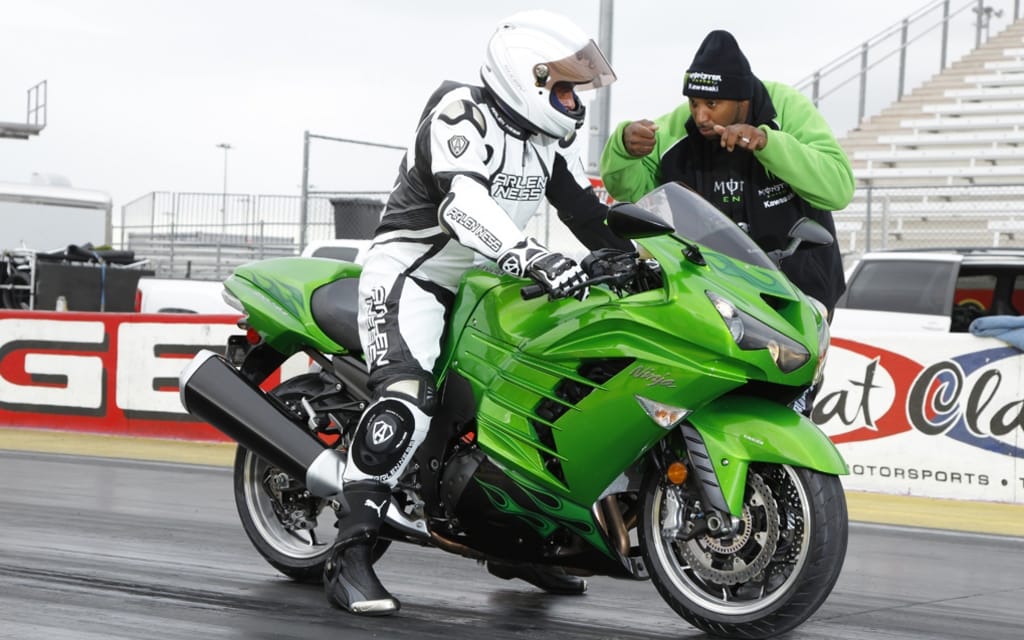 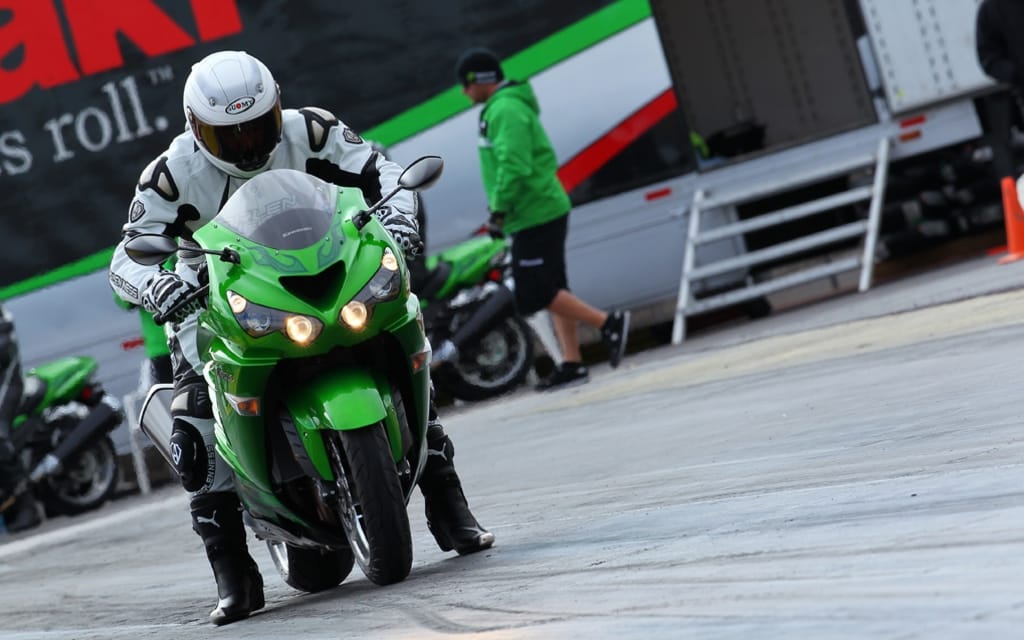 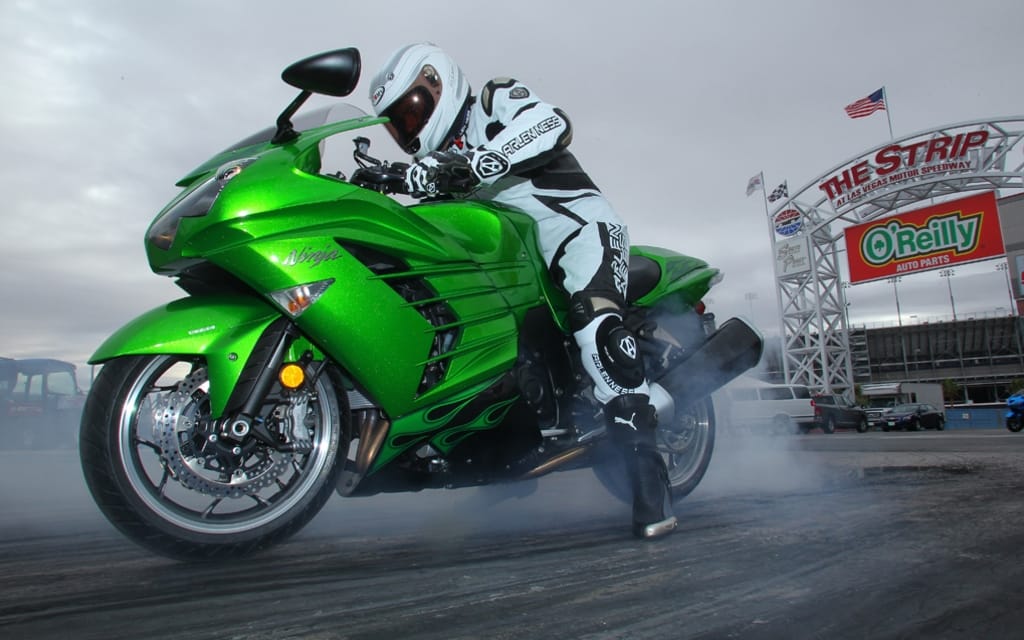 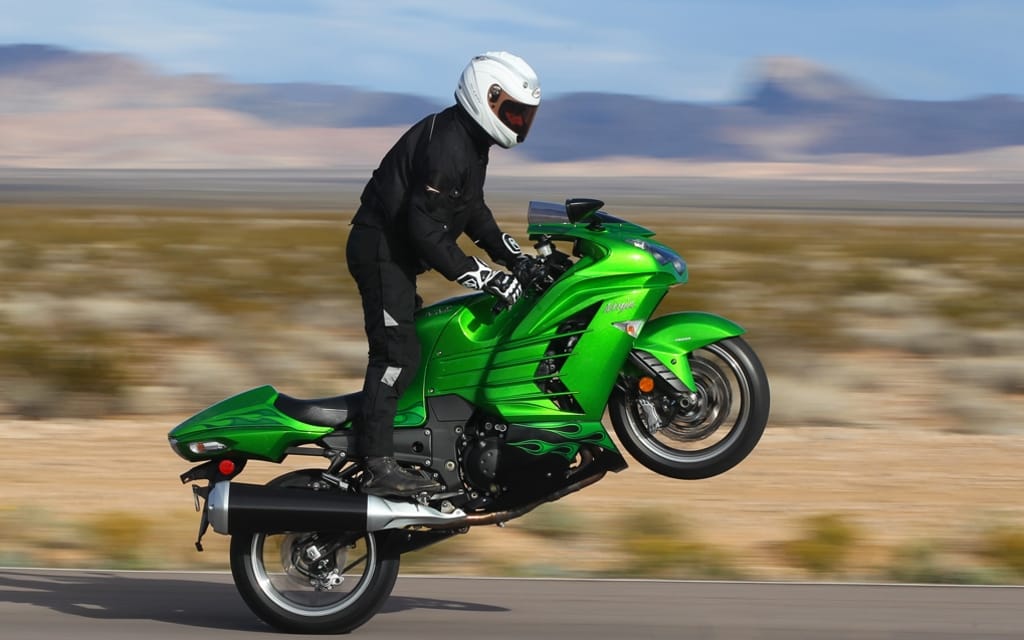 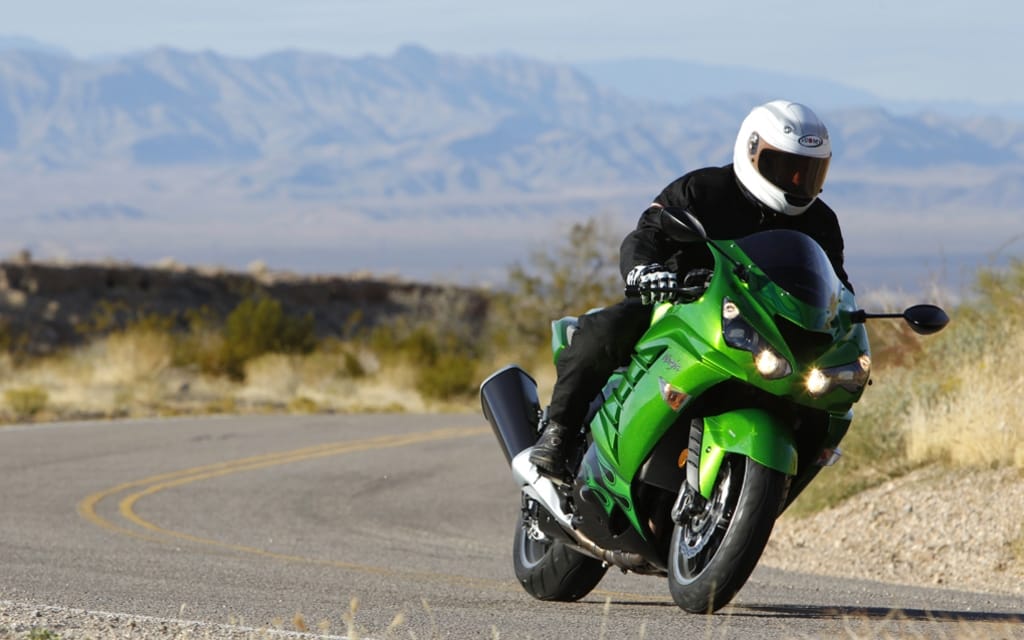 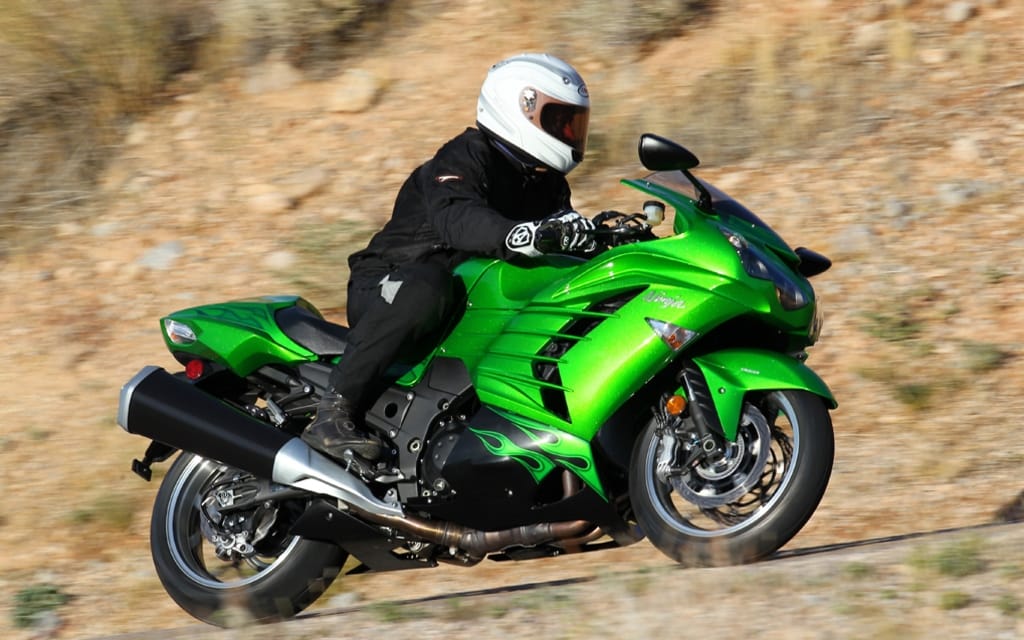 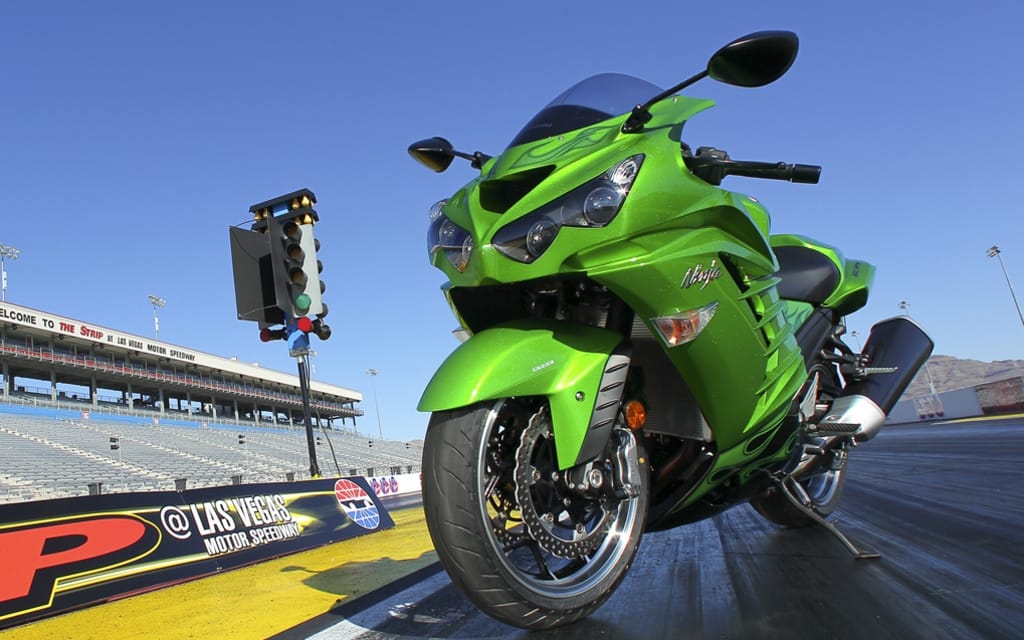 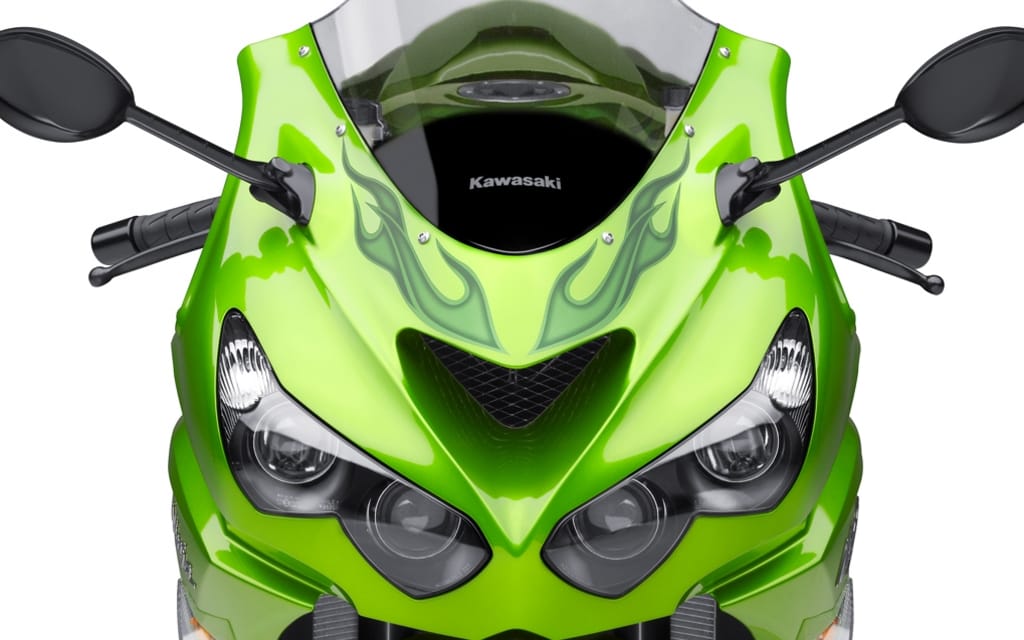 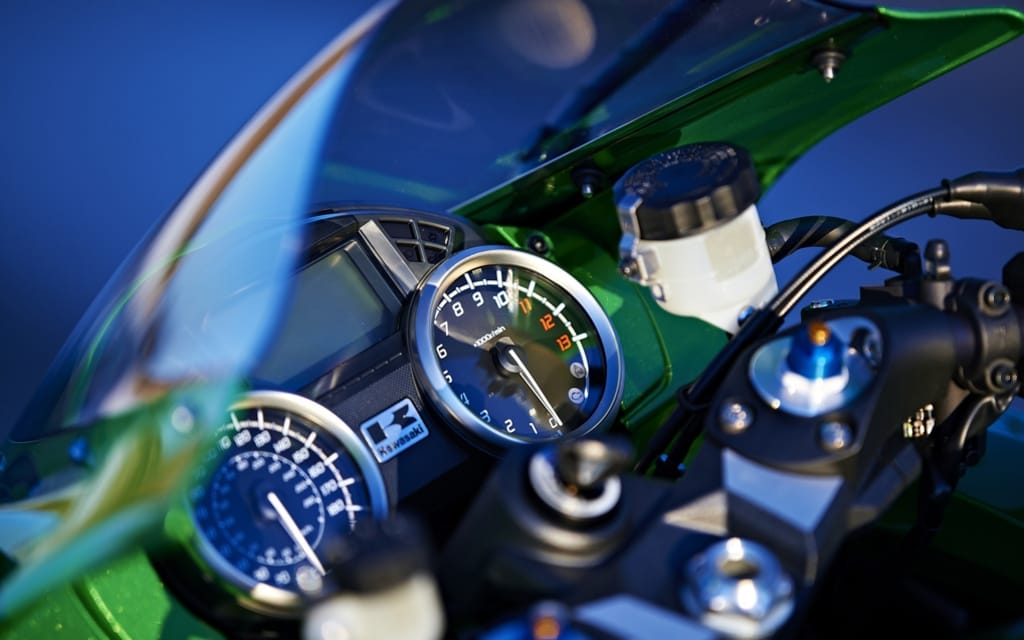 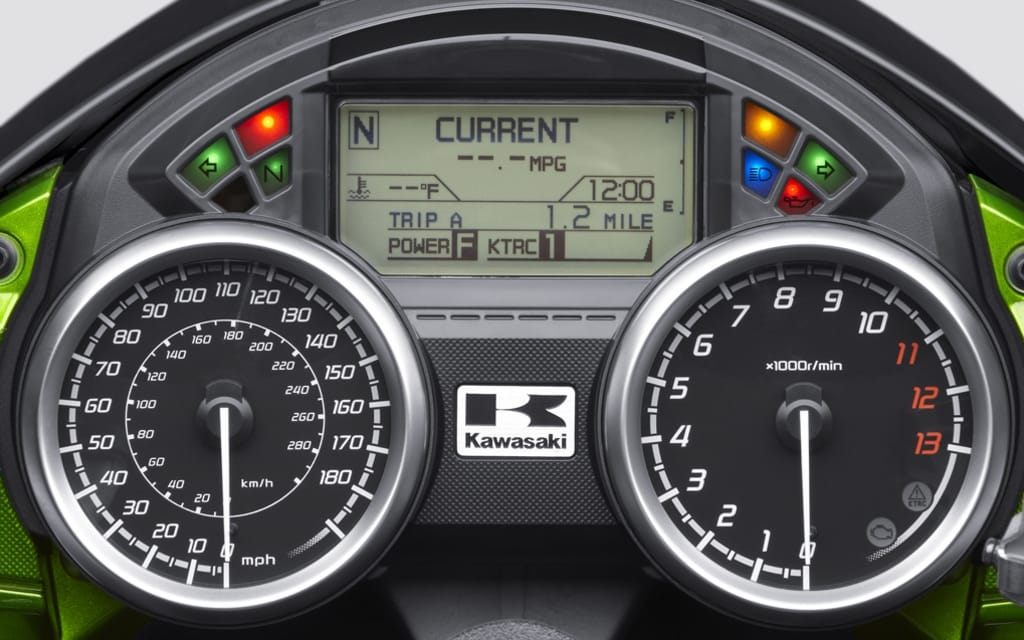 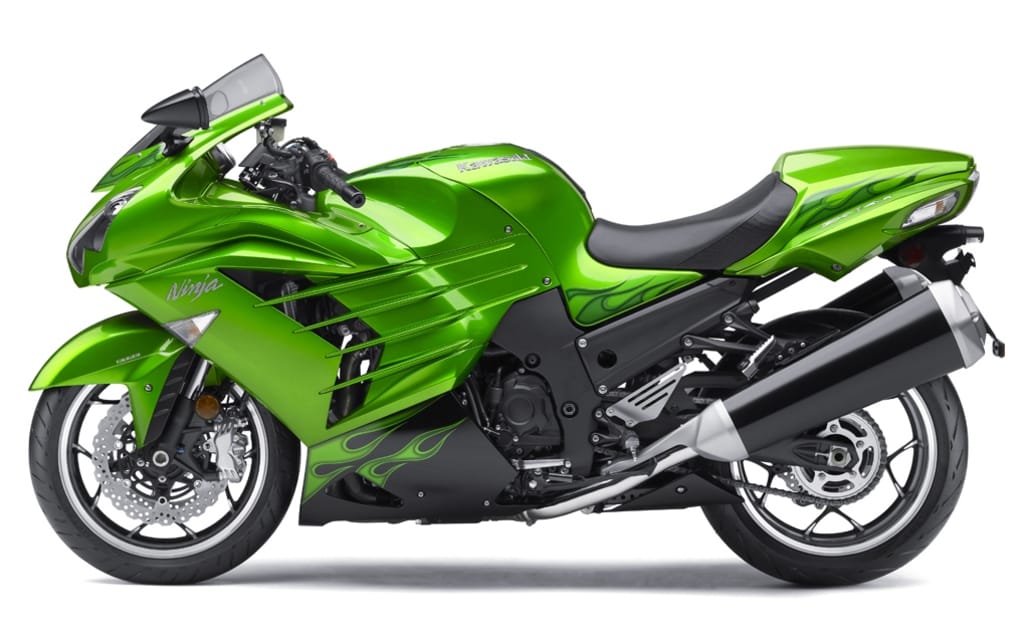 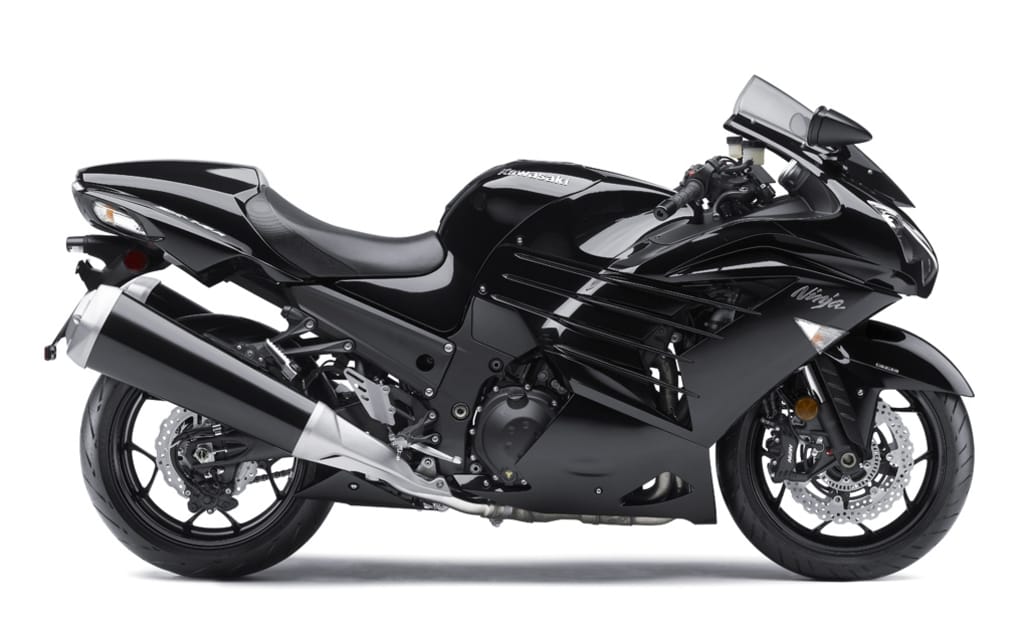 “Welcome to the Strip at Las Vegas Motor Speedway,” read the large sign as I rode past the weigh scales following my first run down the quarter mile drag strip. Not exactly the kind of strip most envision when thinking about Vegas. I’d been here before, in 2006, for the launch of Kawasaki’s first generation ZX-14. Back then I’d recorded a best quarter mile time of 10.263 seconds with a top speed of 225 km/h. Five years later I’m back and out to better my time.

With the 2012 ZX-14R, Kawasaki is swinging for the fences. Fifty percent of the frame is new, displacement has grown, the wheels are lighter, the swingarm is slightly longer, and the suspension has been firmed up for a more sporting stance. Traction control, too, has been added. But this is what you want to know: according to the suspiciously number-less press kit’s dyno charts, the Kawasaki makes more horsepower and torque at all points in the rev range. Since I hadn’t packed a dyno in my carry-on luggage, that number will — for now — remain untold.

A four-millimetre increase in stroke has bumped capacity from 1,352 cc to 1,441 cc. Lighter pistons are cooled by a jet of high-pressure oil and the compression ratio has been bumped to 12.3:1. The cylinder head’s combustion chamber is reshaped, and a machined (rather than cast) surface improves the burn.

The intake ports are now polished to improve airflow. Lift has been increased to 9.3 mm on intake and exhaust cams, and the hydraulic cam chain tensioner is revised to allow quieter cold start-ups. At the business end of the combustion process, the silencers (which now contain catalytic converters) have gained capacity. To reduce the effect of the engine’s compression during rapid downshifting or abrupt deceleration, the ZX-14R is fitted with a slipper clutch.

Harnessing a machine that Kawasaki claims is the “most powerful” and “fastest accelerating” motorcycle currently in mass production comes down to a traction control system. This one combines elements of the system used on the ZX-10R sportbike and the system fitted to the Concours sport-tourer. Level 1 is the least intrusive (Kawasaki refers to this setting, oddly, as suitable for a “winding road”) while Level 2 is best for “wet roads.” Level 1 and Level 2 are ZX-10R derived, while the Concours does its part by contributing Level 3, the “gravel, dirt, etc.” setting. (It can also be turned off.) Alongside traction control is a two-position Power Mode selector that gives the rider either full power or “low power,” which is 75 percent of the available total.

Multi-time drag race champ Rickey Gadson was at the launch and gave us Drag Racing for Dummies tutorials between runs. “Keep it at 3,500 rpm when leaving the lights and then change gears at 11,000 rpm,” said Gadson. To teach us to trust traction control, Gadson told us to go out in first gear and whack the throttle wide open with TC at the 2 setting. An indicator on the dash lets you know power is limited, but a visual indication is not required since the TC system can be consistently felt and heard whenever it kicks in. (It has an anti-wheelie function in TC 2 and 3 and will stand up in TC 1, but the best wheelie position — as I later learned in the photo session — is with traction control turned off.)

Watching Gadson is witnessing a master at work. After donning his gear, he leans the bike to the right (to get oil onto the clutch, presumably), does a burnout to warm the tire, and rips off a run in 9.508 seconds. All of our runs were done at full power and the majority with TC in position 2. Only later in the day did I graduate to using TC 1. To avoid the unwanted press of journalists looping bikes onto their heads, runs without traction control were verboten.

Good quarter mile times require understanding the lights. To begin, the bike is rolled forward until the front tire breaks a beam and activates the top pre-stage yellow light, or what Gadson calls the “get ready” light. Then you keep the engine at a constant 3,500 rpm, load the clutch, crouch down low, and push forward with your toes about four inches. That breaks the second beam and starts the rest of the lights marching toward the final green. A good reaction time (and a correspondingly good quarter-mile time) is dependant on releasing the clutch on the last yellow.

Switching from TC 2 to TC 1 improved my time by just 0.03 seconds. The windblast from the airplane-like acceleration made it hard to lift my right foot onto the peg down the run; sometimes, it didn’t make it. Gadson had been telling me all morning to go harder on the gas. The trick is the first 60 feet, he said. A half-second improvement early on translates into seven-tenths of a second quicker at 100 feet, and so on. The problem is that I have 30 years of built-in human-modulated traction control, and whacking the throttle any harder scares my subconscious silly. I’m being too smooth in applying throttle and not allowing traction control to do its job, though my best time (10.167 seconds at 232 km/h) is faster than I’d done on the old bike.

If you’re wondering why we were spending so much time at the drag strip, the answer is both weather- and marketing-related. Howling winds and rain pulled the sock over a road ride, which skewed the content of this review to be heavily track-biased — but there’s more to it than that. In North America, Kawasaki believes that ZX-14R customers are intensely interested in straight-line speed and acceleration. But in much of the rest of the world the ZX-14R is positioned as a sport-touring machine, and it can be fitted with mounting brackets for hard panniers. (If you have visions of Mach 1 sport-touring be forewarned: the North American tail section isn’t compatible with mounting brackets.)

It’s a shame, really, as the ZX-14R (despite my only having the opportunity for a short road ride) is a surprisingly capable all rounder. To ease the rider’s reach to the ground, the seat is narrower at the front, though I found that it tended to push me into the tank (a condition that may have had something to do with the morning’s drag racing session). Windblast hit me at mid-chest but is well deflected in full tuck, and vents in the fairing seem to effectively protect the rider from excessive engine heat. (The engine runs cooler in part because of the addition of a second fan to the radiator.)

Lending credence to the claim that the ZX-14R makes a capable all-rounder is Kawasaki’s insistence that the bike’s revisions result in 20 percent better fuel mileage (albeit at 80 km/h). Fuel injection tuning takes the credit and the bike’s ECU automatically prioritizes to favour driveability or fuel economy based on the rider’s throttle inputs. Somewhat comically, for such an outrageously powered motorcycle, an “ECO” indicator on the LCD dash lets the rider know when optimum fuel economy speeds have been reached. Additionally, the dash displays current and average fuel economy and fuel range, and is receptive to programming of the shift and launch light, for you drag strip junkies. Kawasaki, in focusing on fuel economy and ferocious speed, is carving out a most unusual niche. Not that there’s anything wrong with that.