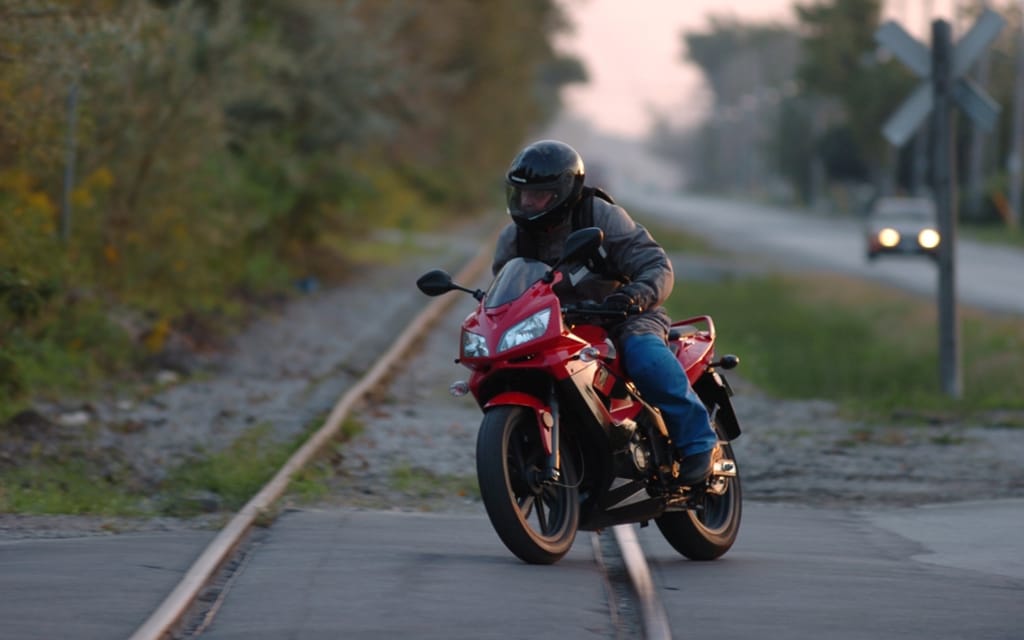 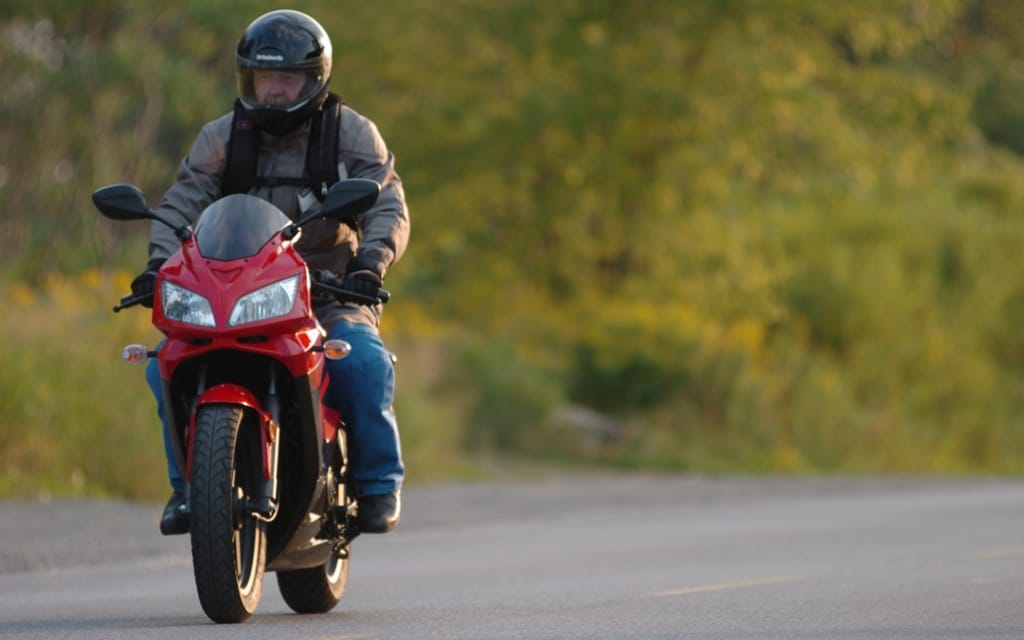 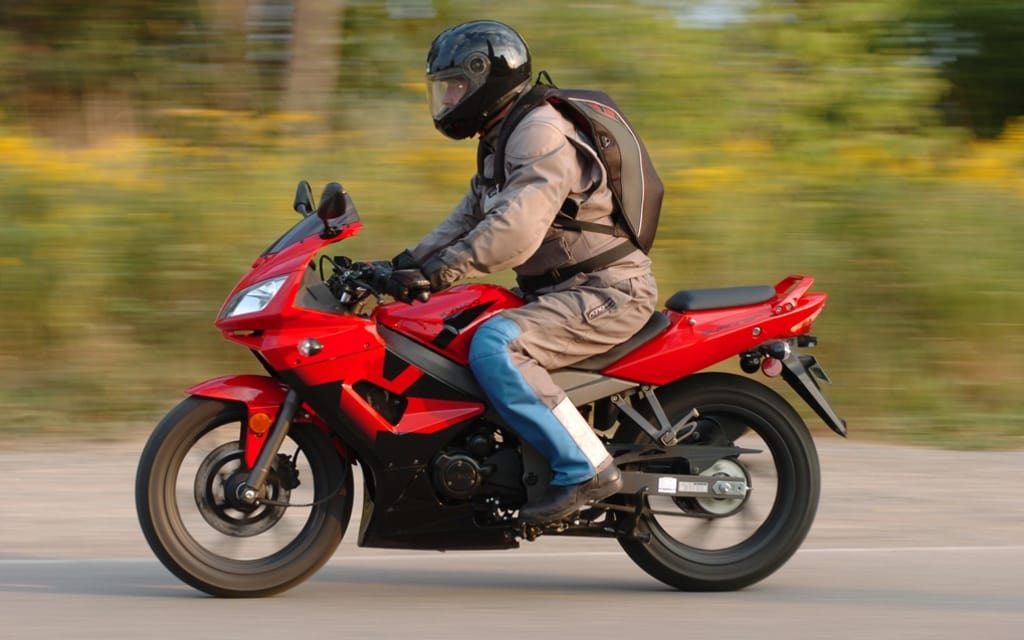 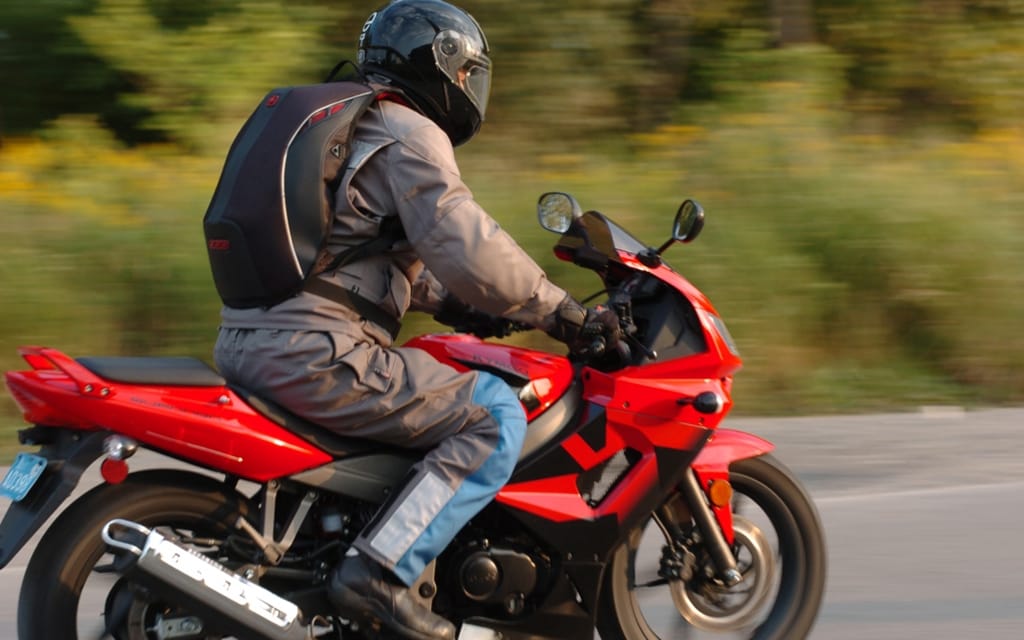 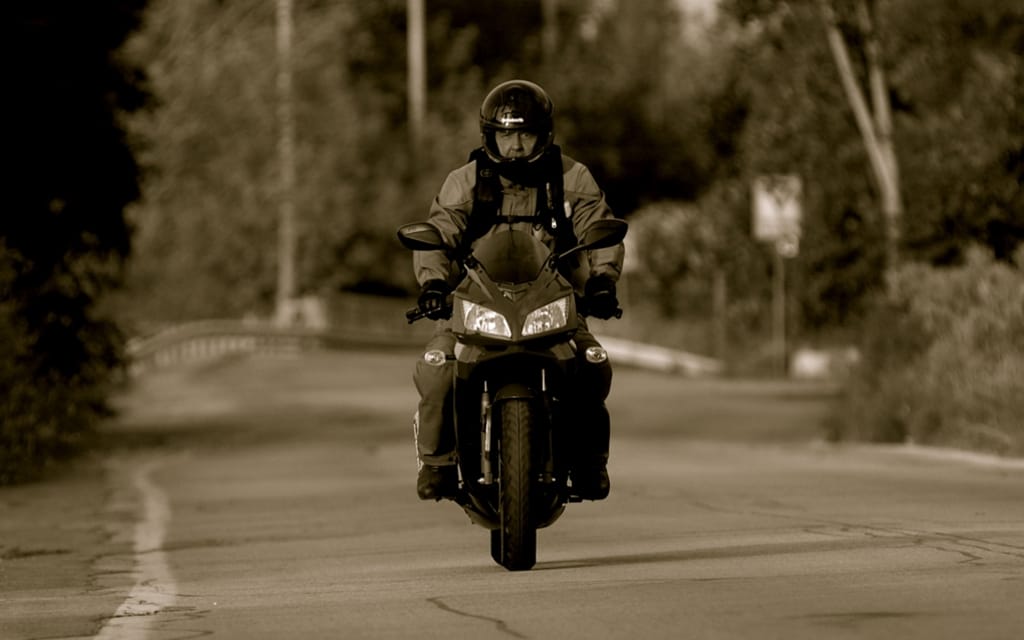 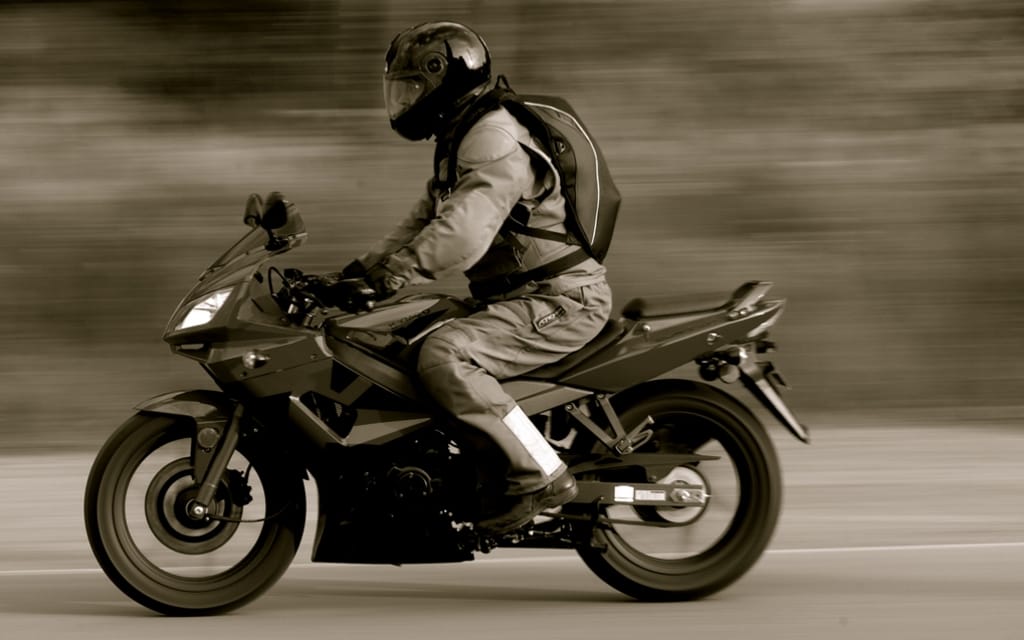 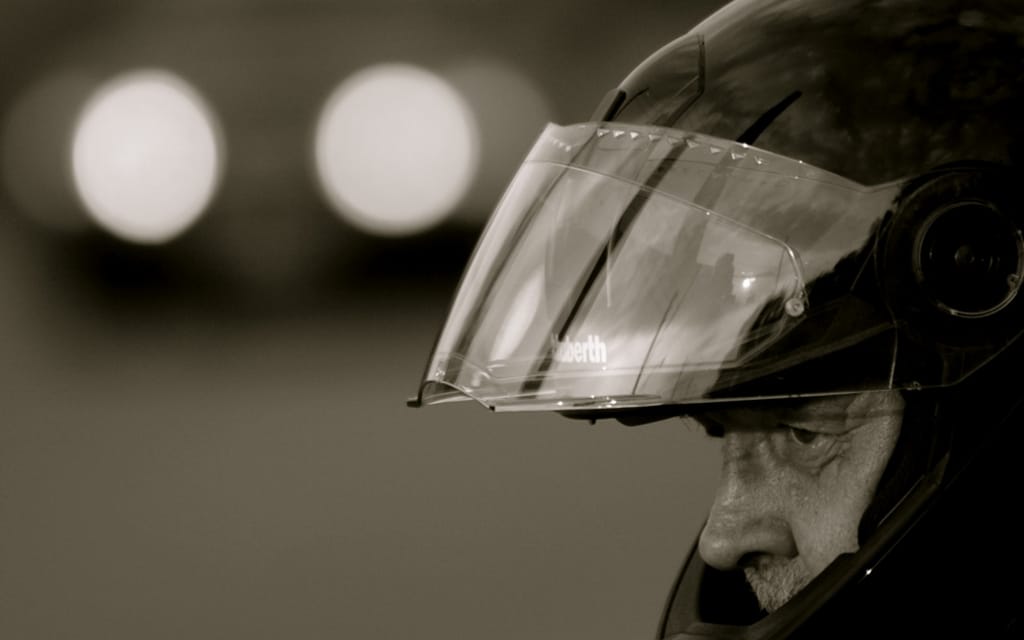 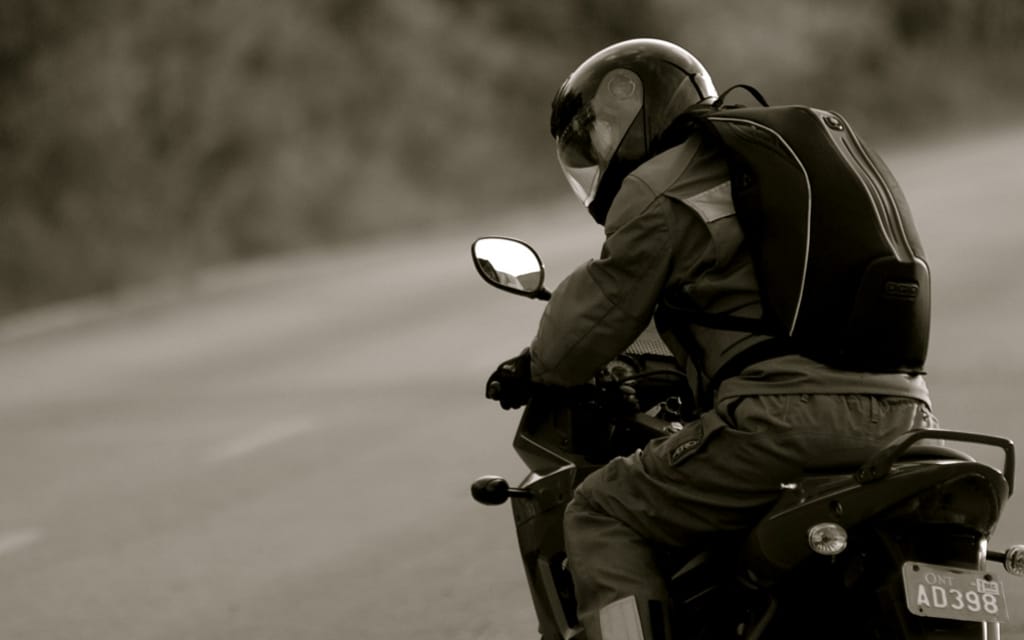 All Night Long on Kymco’s Quannon 150

June 25, just barely – in fact, it’s 5 a.m. Drizzling. A hundred scooters are lined up behind the Holiday Inn in Barrie, Ontario. Neighbours are sleeping, so we’re told to avoid playing with throttles. A photographer stands by, snaps a shot of me before I head into the darkness on a 50 cc scooter provided by Kymco.

And darkness it is. Costa Mouzouris and Toronto Star “Wheels” editor Mark Richardson wait for me at the exit; they’ve invited me to join Team Death Star for the duration of the 2011 Mad Bastard Scooter Rally, which is good, because Mark knows how to read maps. As I approach, Costa gets off his scooter and peers at mine. “Steve, you don’t have a headlight,” he says, and then he and Mark wait 10 or 15 minutes while a Kymco rep tries in vain to get my bike illuminating. Finally, I tell them to go ahead, and then I watch their taillights wobble down the road. I had looked forward to travelling with those guys.

Another 10 minutes and it’s obvious we’re not going to have a lighted scooter for me, but then a break; I’m given the keys to a Quannon 150. I can do this after all. But it’s not all good news: the Quannon is Kymco’s answer to the highly sales-worthy Honda CBR125R. It’s a sport bike. I was prepared to do the rally on a sit-up scooter, but on this thing I’m going to suffer. The Mad Bastard is a 700-kilometre ride.

For now, I’m just anxious to get Kilometre One under my wheels and then work on catching Costa and Mark. Yes, they have a half-hour lead, but I have the big bike. I roll on the power and squirt into the darkness, and sure enough, after 20 minutes or so, I find them by the side of the road. So now I’ve got company, but even that is a mixed blessing. If I’m going to ride with them, I’m going to do it at scooter speeds, which is about 50 km/h. In the end, it took 23 hours to complete the rally. At 4 a.m. the following day, we became the last riders to come home.

About two hours earlier, we had assembled at the bottom of Scenic Caves Road near Collingwood. We had been riding for 21 hours and we were exhausted. The Quannon had worn me out. For a 150, it’s roomy enough, with an 800 mm seat height (31.5 in.), but that seat was comfortable after four hours on the road; now it’s a plank, and my wrists are hurting almost as much as the back of my neck. Mark has taken the Quannon for a little while, letting me relax on his Kymco Vitality scooter, but for this massive hill, he wants the 50 back; he wants to find out if the scooter can make the summit (it did).  I reluctantly hand it over to him and climb onto the Quannon again.

In the company of a couple of 50 cc scooters, the Quannon seems muscular. With about 14 horsepower and seven pounds-feet of torque, it accelerates in a businesslike manner, without hesitation but also without any kind of rush. The analog tachometer indicates a redline at 8,000 rpm, but the little singlecylinder, carburetted Quannon revs past that and just keeps going, to 9,000 and beyond. In first gear, it reaches that engine speed very quickly, but the motorcycle is not going faster than about 30 km/h.  Later, in Toronto, I find that it’s necessary to redline the engine through all five gears in order to join a high-speed expressway traffic flow.

But on the long, steep ascent of Scenic Caves Road, there is no other traffic, and the 150 is able to maintain a modest velocity with an occasional downshift. Near the top, I pull over to wait for my companions. They are so far back I cannot hear their engines, but presently they come zipping past me. At a rest stop farther up the road, I ask Costa if he wants to trade rides with me. “No,” he says, “but I will if you need me to.” Costa is more exhausted than anyone I can remember seeing, but he gives me his scooter and takes the Quannon, and for half an hour I ride sitting up straight. I like the improvement in comfort, but miss the power of that 150 cc engine.

Later, we are approaching Barrie, riding secondary highways under the stars. We’ve been out for 22 hours, and I find that I can’t bear to ride for one more minute, but that minute comes and goes anyway, and so does the next. Time gets irregular; one minute seems to last forever, and the next 10 go by in a flash. I’m not giving this my full attention now, just following red taillights and the faithful beam of my functioning headlight, and I begin to hate riding; the very act seems designed to induce pain. My hands hurt where they are bent on the grips, the back of my neck is burning, and my knees are cramped and sore. I’m also falling asleep, forced to shake my head at times to maintain some form of alertness. We’re not going fast and I’m not in danger of a sudden blackout, but it’s very, very uncomfortable.

But I can’t blame the Quannon — it’s a matter of exposure, not quality. Quality is always a compromise, of course, and Kymco has tried to build a motorcycle that will appeal to new, young riders with a low price ($3,495) and attractive looks. Kymco is a 48-year-old Taiwanese manufacturer and claims to be the fifth largest maker of motorcycles in the world, so there is some experience and industrial weight behind this motorcycle, but it is not exceptional in any way. It’s light and easily manoeuvrable, the controls are not unduly stiff or awkward, and when it’s ridden into a corner it holds the line without additional effort from the rider. It’s also roomy for a 150, feeling almost as spacious as larger motorcycles.

The suspension is weak, however, and it’s softly sprung, so road irregularities are jolting at times. Also, it’s loud – quite loud, actually. The engine clatters and there’s an intake howl that becomes unpleasant after a while; it’s louder than the wind at the speeds the Quannon is capable of reaching.  The transmission is also a bit notchy, though generally shifts well enough. It’s the kind of thing you wouldn’t necessarily pay much attention to if you hadn’t recently ridden a Japanese bike of about the same size.

The Quannon’s 149 cc carbureted, four-valve single is capable of pushing it up to about 125 km/h, so it can manage highway travel, though it should not be used on a highway as crowded and fast as the 401 in southern Ontario. The bike is light, at a claimed 137 kg (300 lb), and can be blown around by passing trucks.

As we motor on toward Barrie in the deepest part of the night, I grit my teeth and tell myself that soon we’ll see the lights of the city. There’s a bottle of scotch in the rally HQ that I’m going to pilfer, and there’s a bed with soft sheets waiting. I’ve been sitting on this motorcycle for far too long. When I look at my riding companions, it’s evident that even on a sit-up scooter, this has been too long a ride. Now it’s a question of endurance, not enjoyment.

But still, the night air is cool and the road passes under my wheels in a pleasing manner. At times, I can forget the physical discomfort for a minute or two, and then there is only motion; I cannot see what’s beside me along the roadway, only the pavement rushing toward my front wheel and the red glowing pinpoints of Mark and Costa, ahead of me. The motion is sensed more through wind and vibration than visual inputs, and when the road takes a sudden dip and I get just a bit light in the seat, it’s momentarily pleasurable. I want this to be over, and soon, but even after 700 kilometres and 23 hours, it’s still possible to feel some joy in motorcycling. I just wish I could feel it in my hotel bed.

June 26, just barely. There’s a buzz in my head that won’t go away, and I’m a little dizzy. Somehow, Costa and Mark have disappeared, and it’s as if we haven’t done this thing together. Nobody has the energy for a high-five, or even to say goodnight.  That’s okay. There’s that scotch and there’s that bed, and the pain in the back of my neck is already going away.