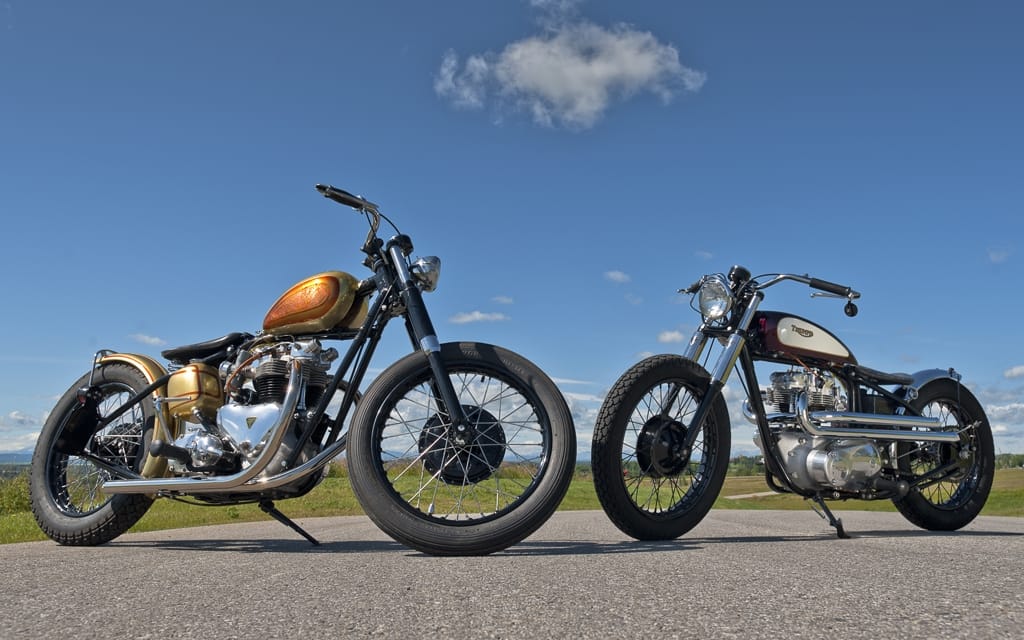 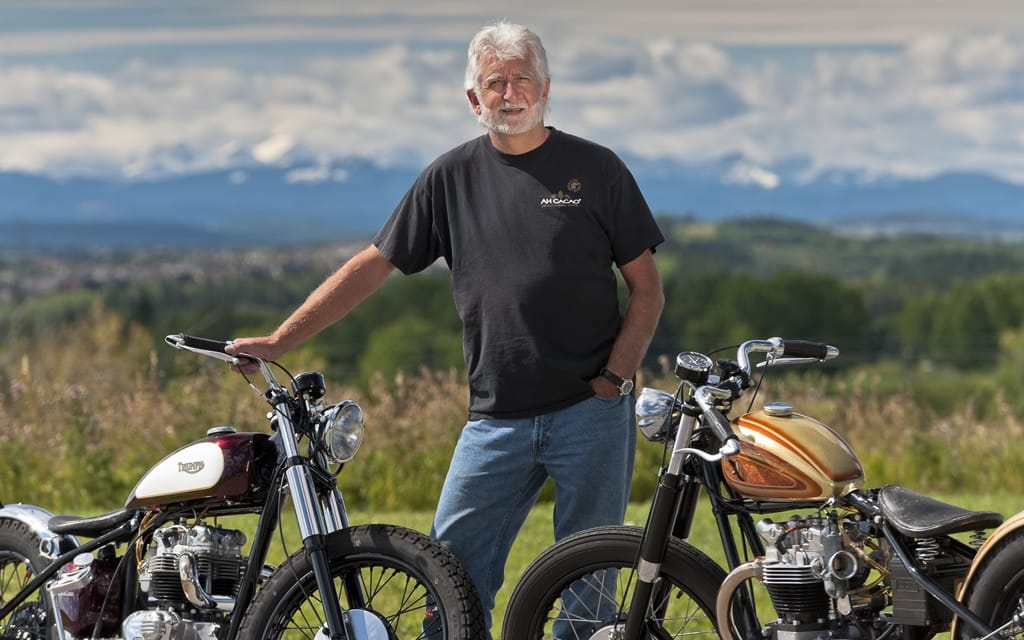 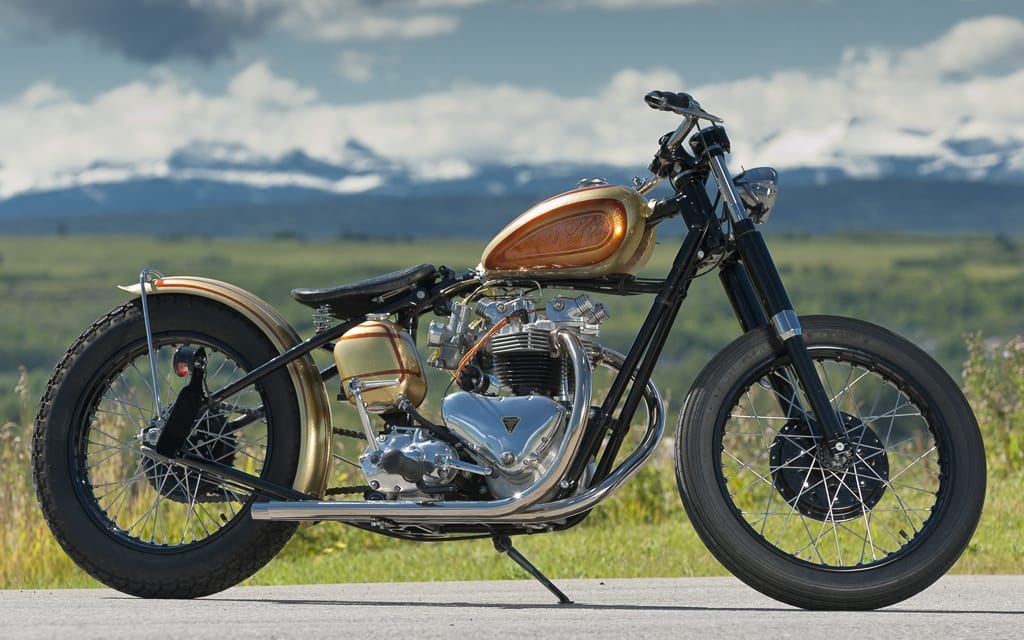 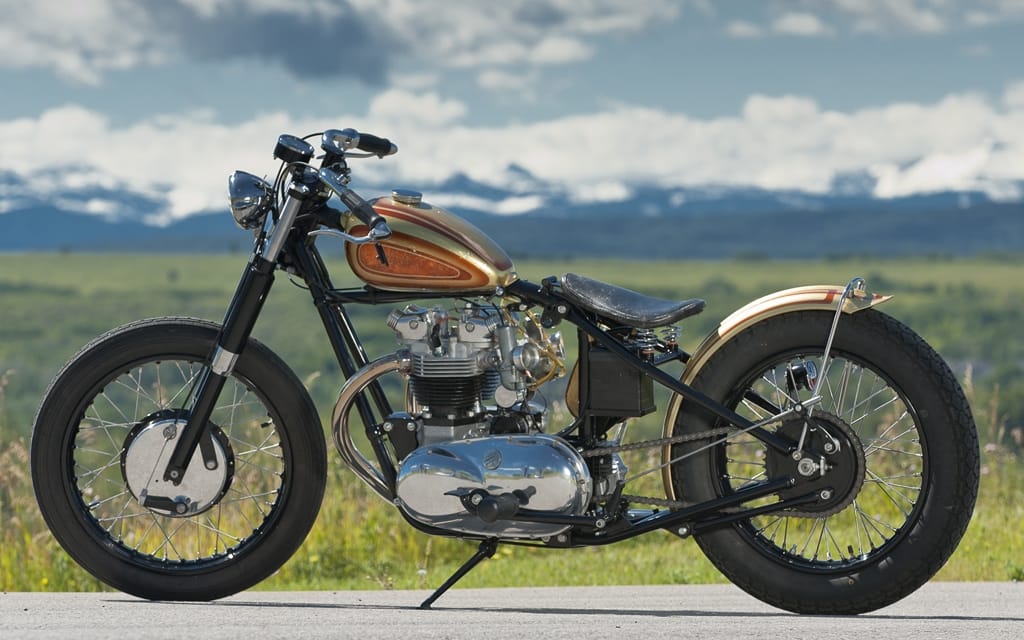 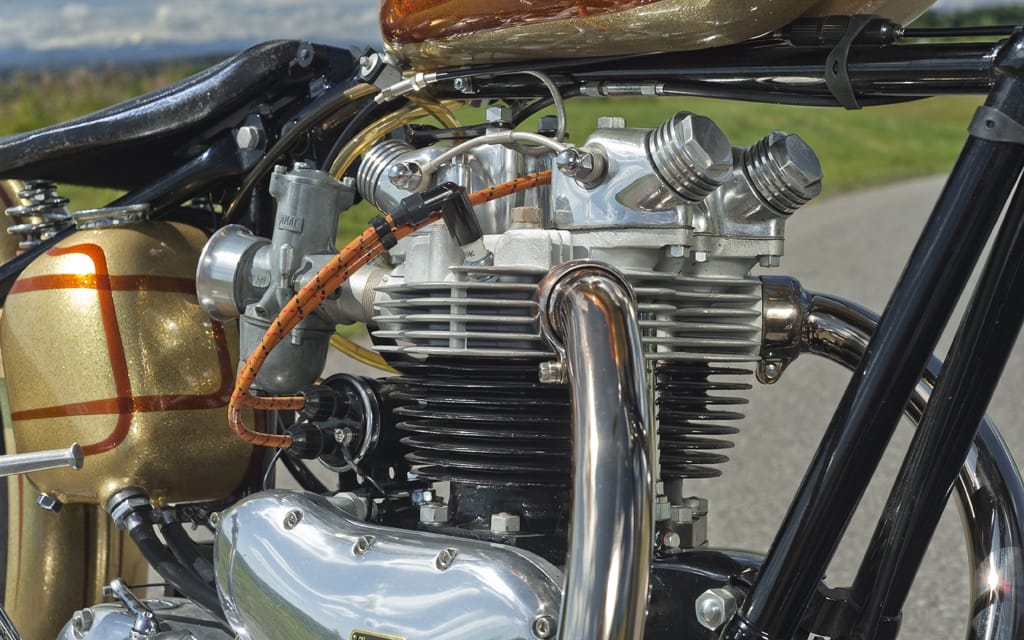 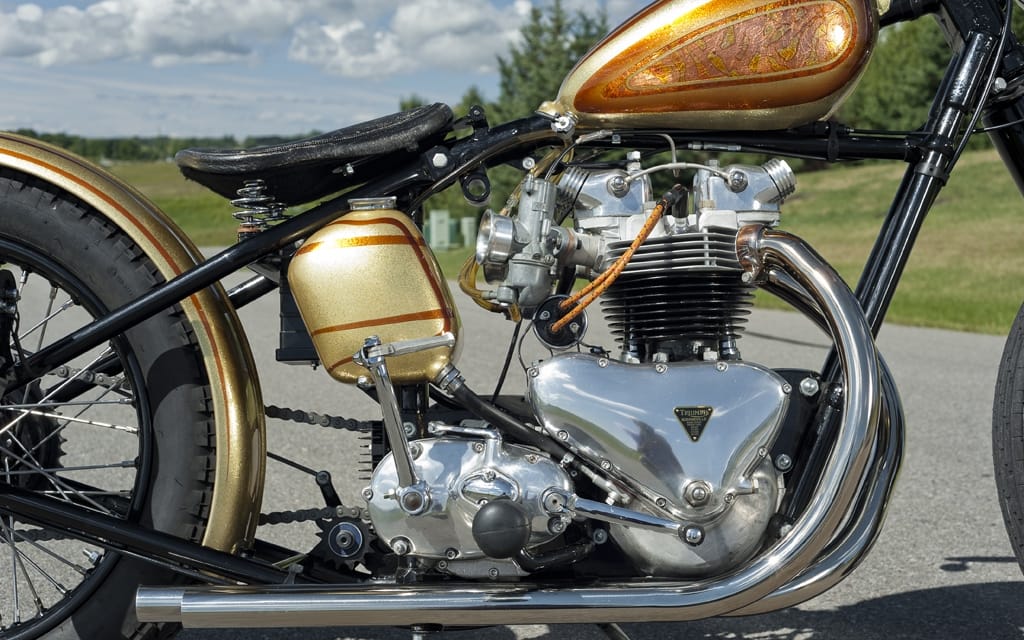 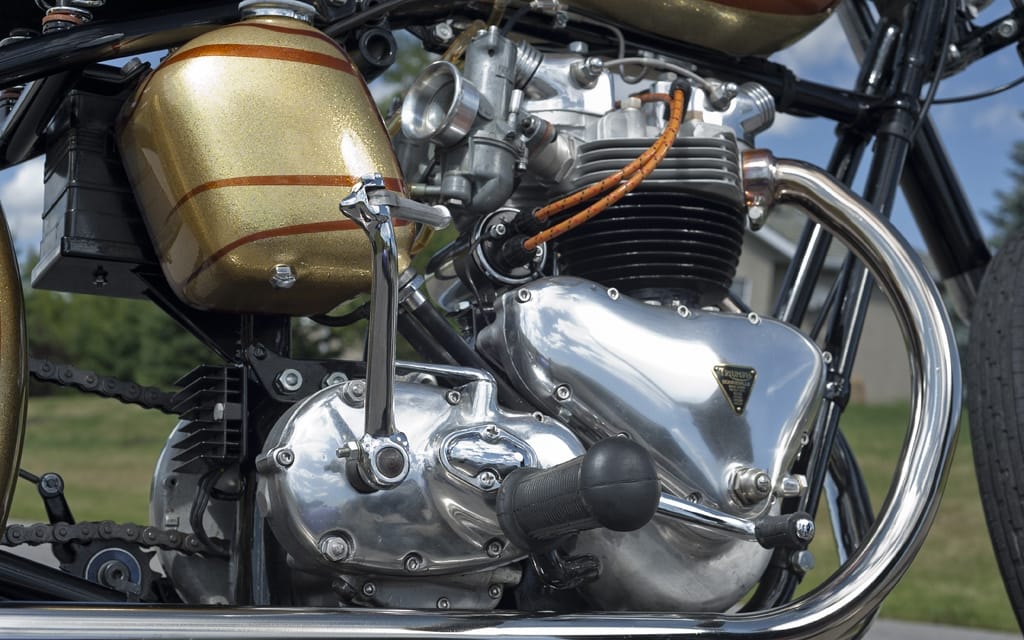 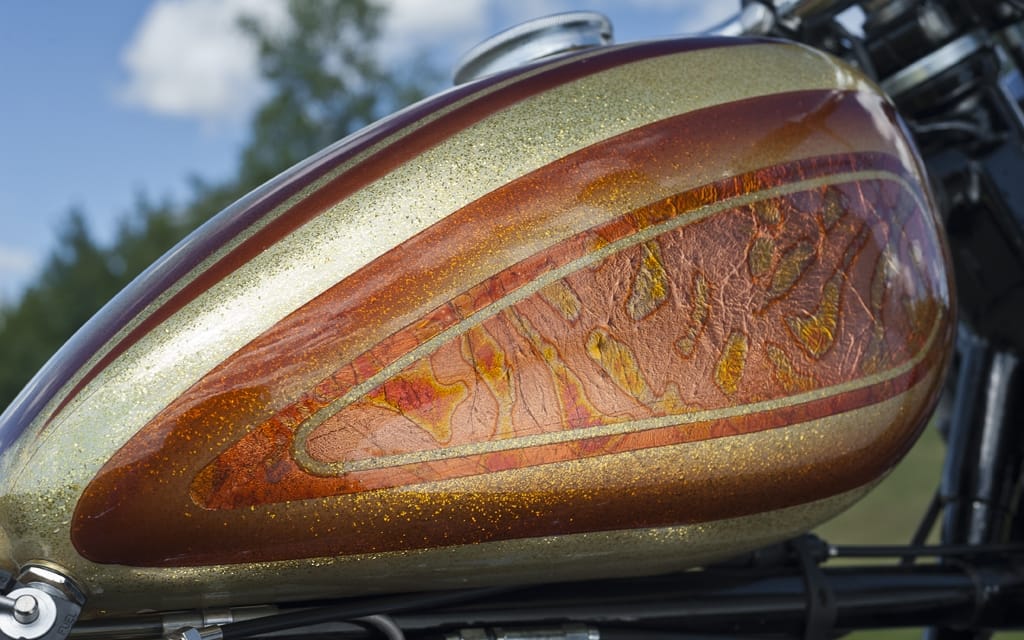 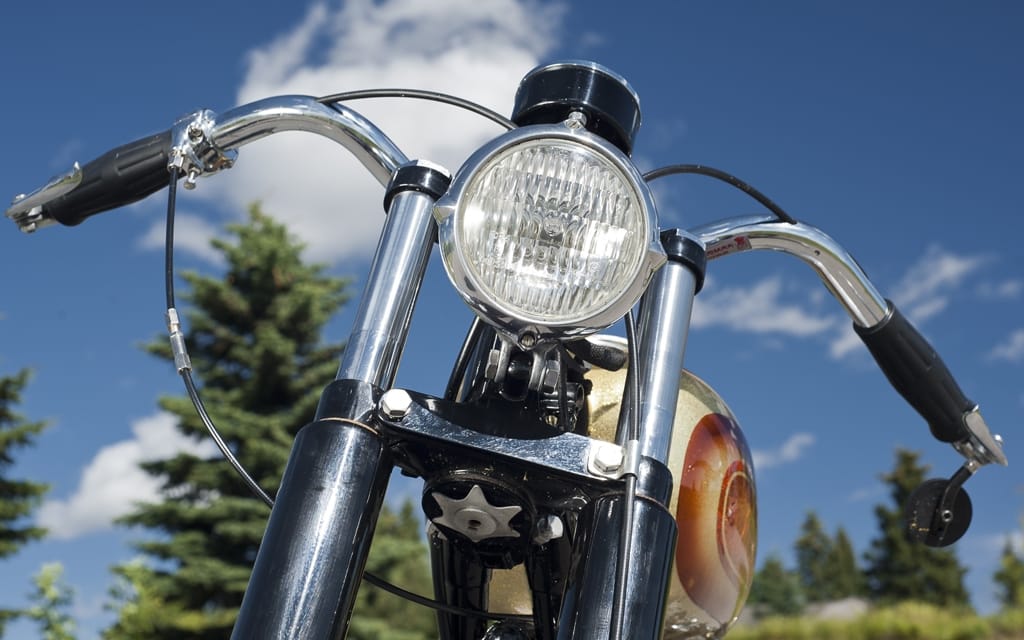 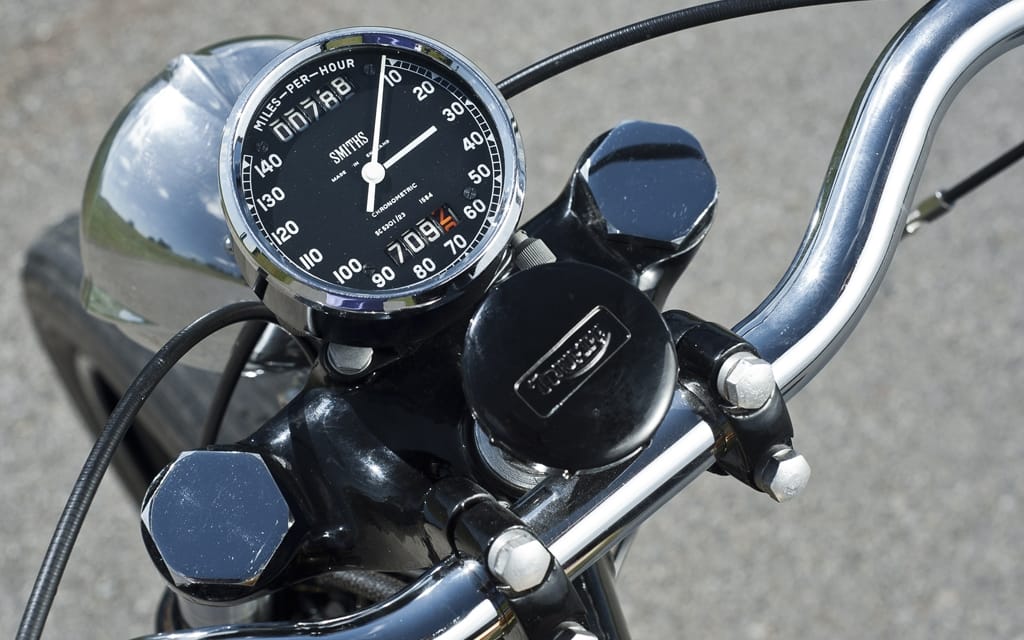 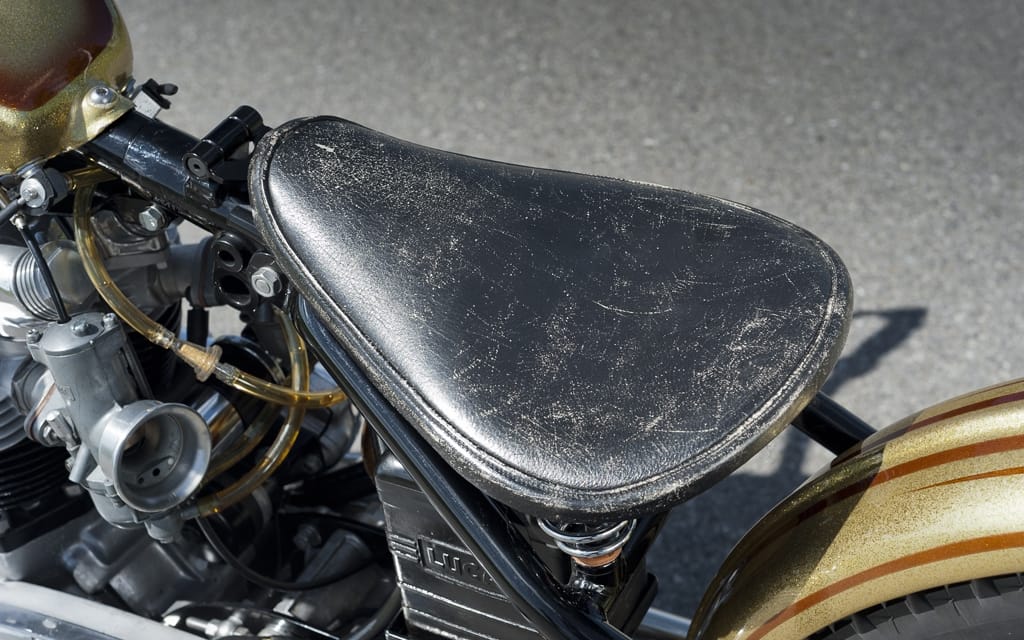 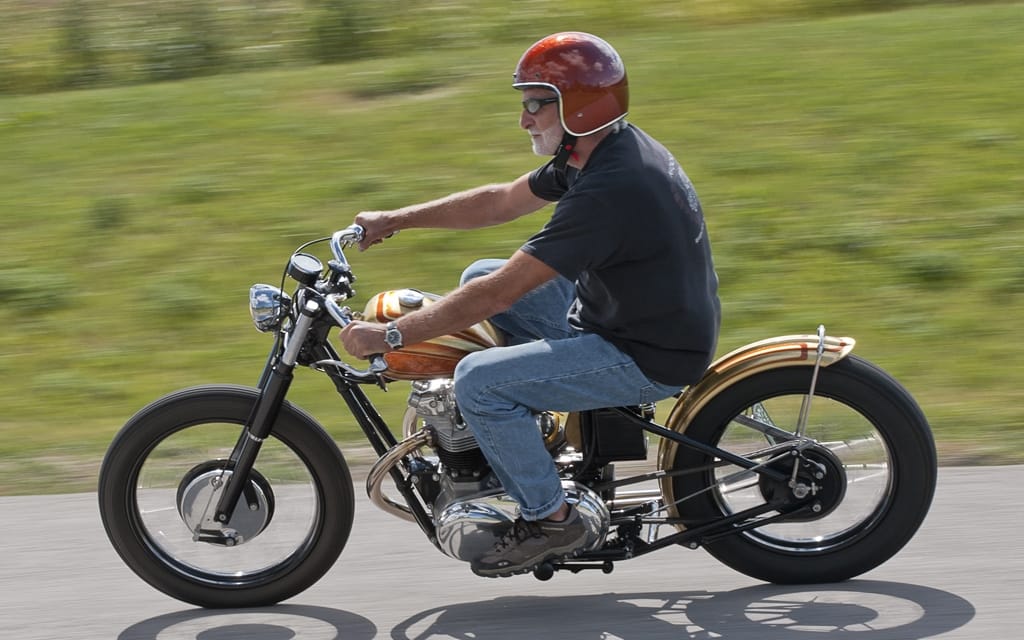 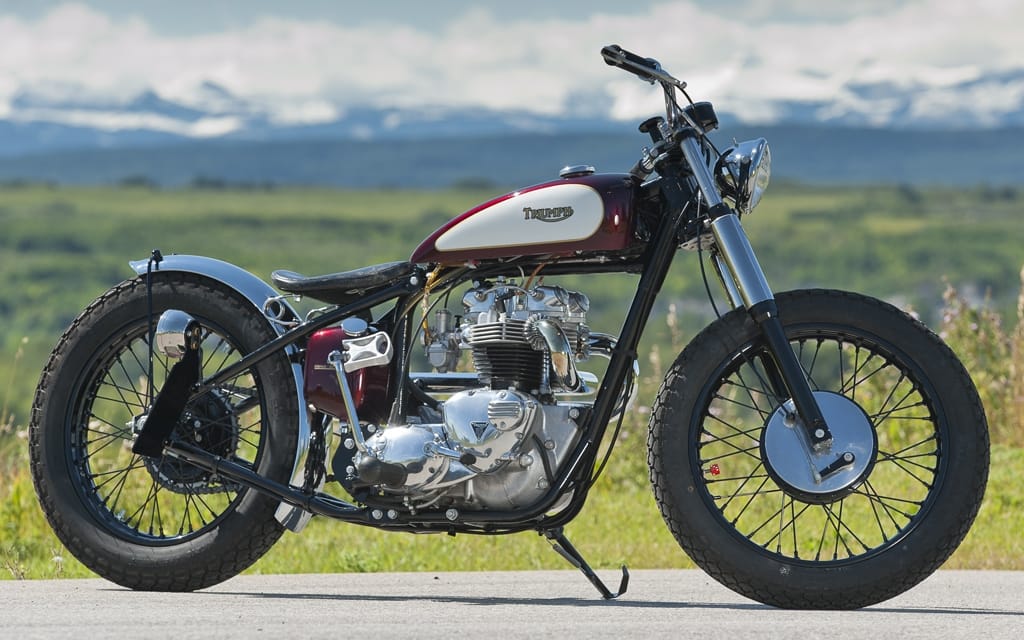 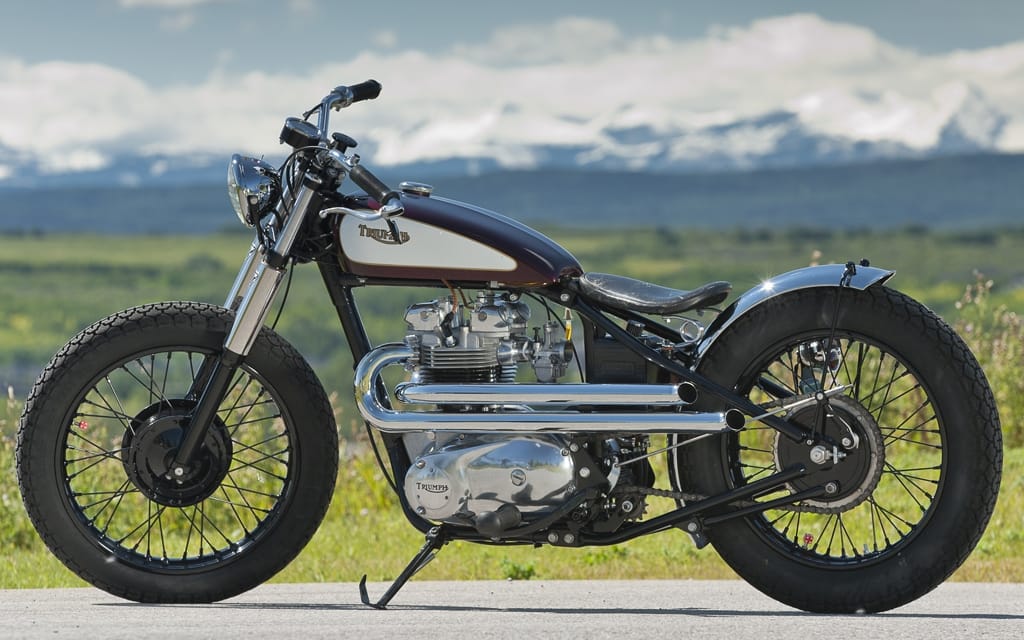 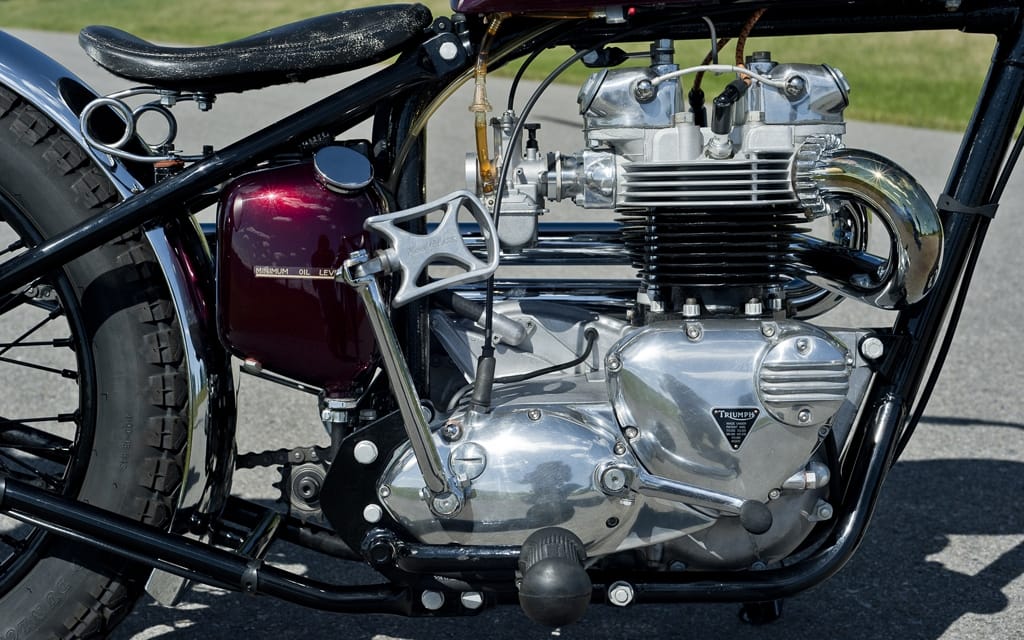 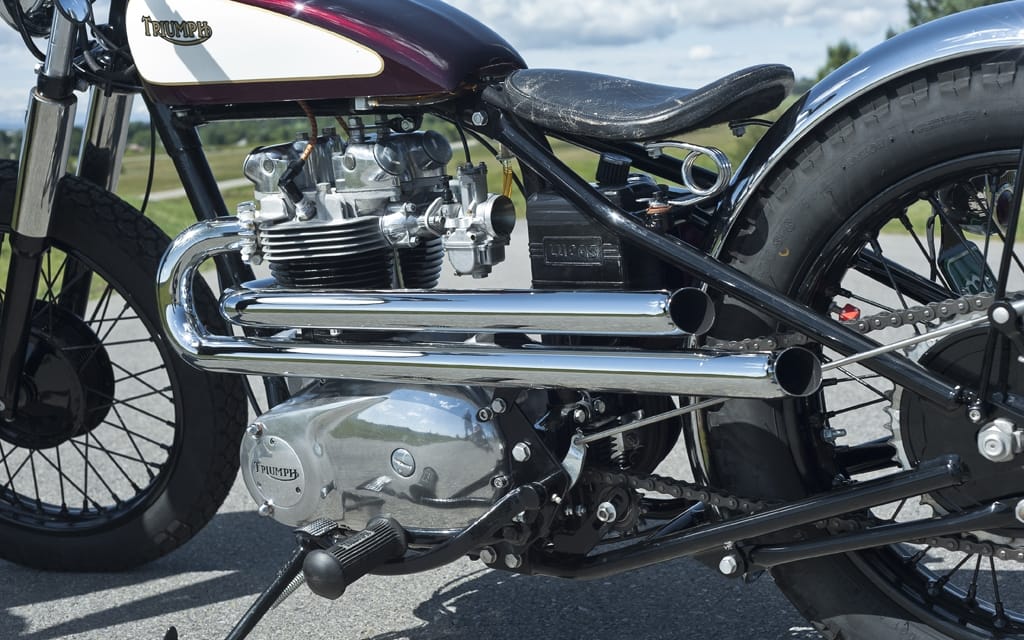 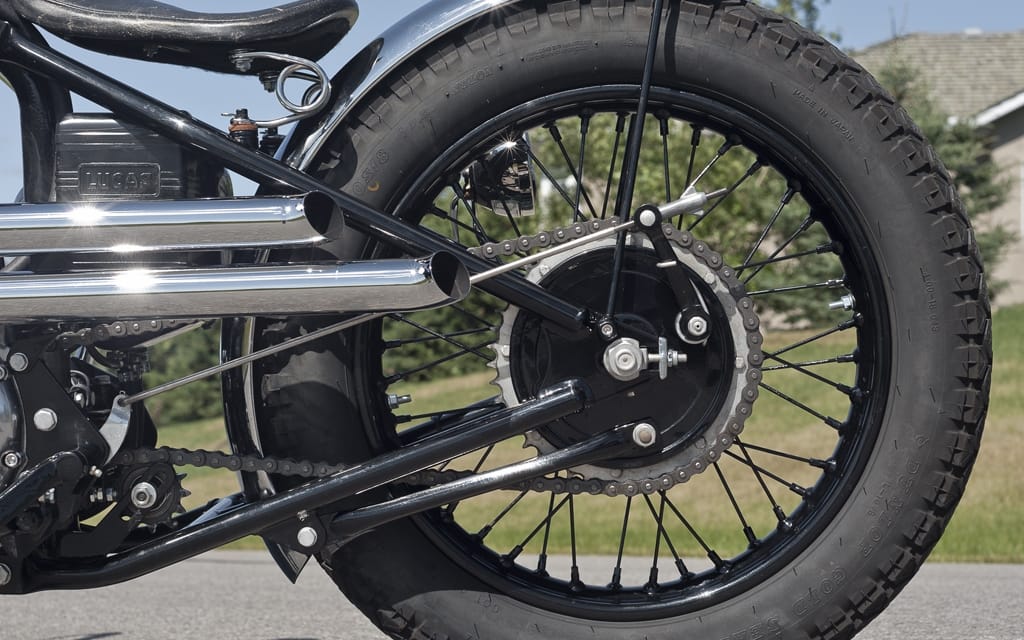 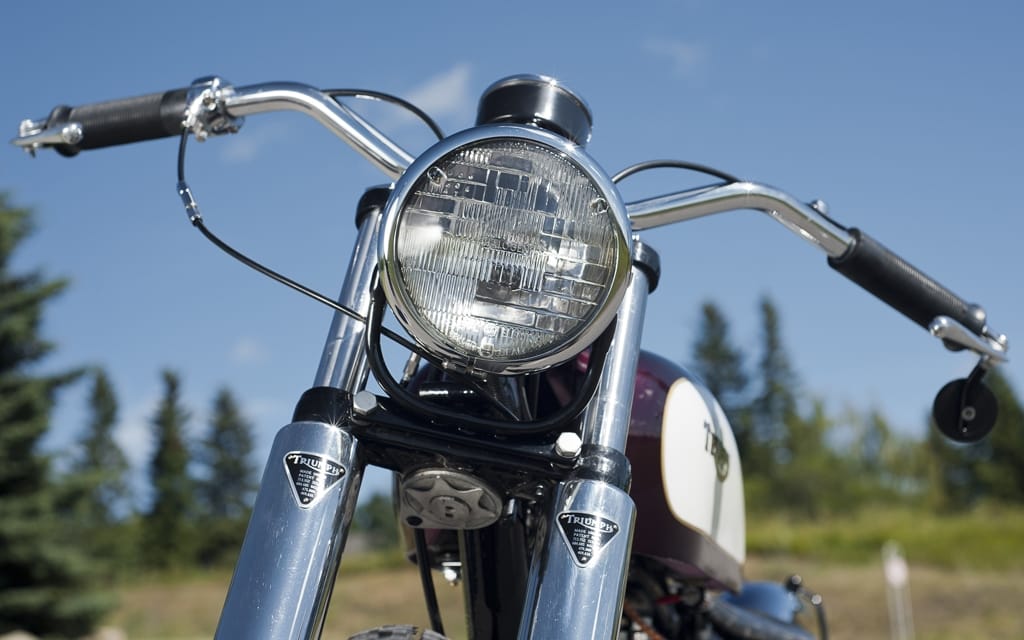 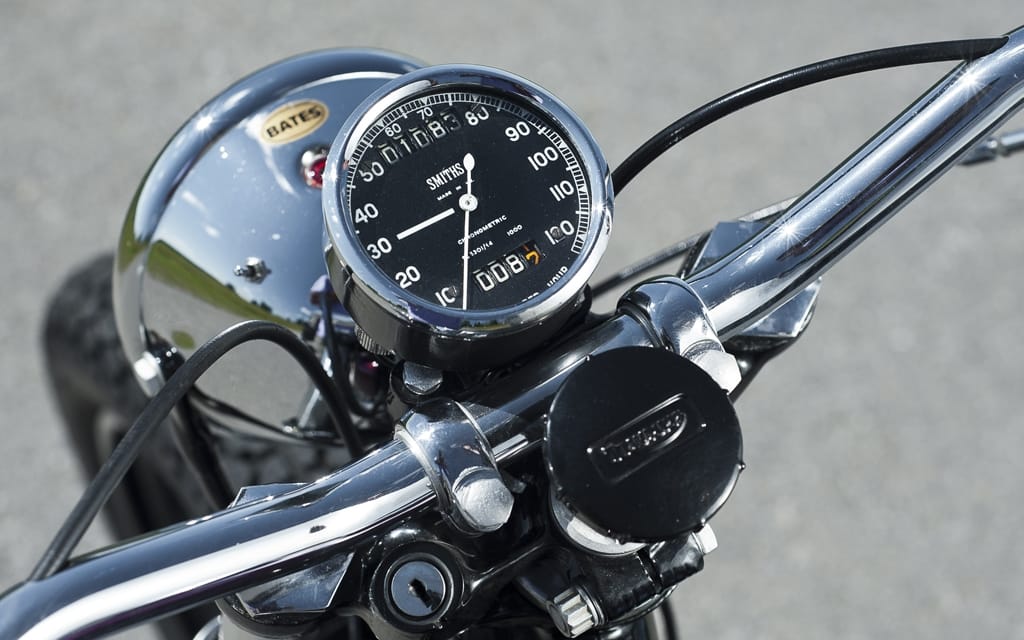 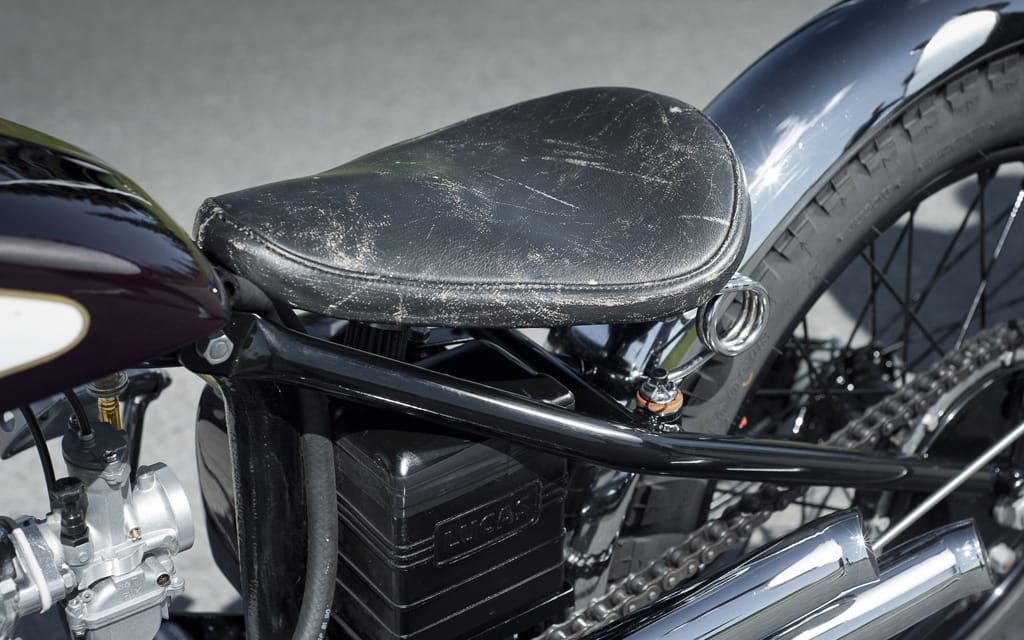 A freakishly fast sport bike it’s not. Nor is it a long and lazy chopper with chromed sissy bar and forward controls. Neither would be Bob Klassen’s style.

But the bobber, as it turns out, is. Klassen became a believer in stripped-down customs after constructing his first Brit-bike bob-job. “I quickly realized this was the most fun British machine I’d ever ridden,” Klassen says. “It’s quick because all of the excess weight is gone, and it handles significantly better because the rider’s centre of gravity is lower than on a stock bike. It carves turns and is very responsive to input through the bars — it’s like being on your first bicycle as a kid.”

Klassen got caught up in bobber building when a few years ago he started seeing images of Brit-bike bobbers on the Internet. Something in the stripped-down style stirred his soul, and he began downloading photographs of machines he liked and collecting key Triumph (his favoured brand) components to build his own. In In the fall of 2008 he bought a 1970 650 cc engine, wheels, and front frame loop. Though he was out of the country over the winter, Klassen didn’t waste any time in the spring of 2009, and he had the bike ready by midsummer.

In the fall of 2009 Klassen began accumulating bits again, this time for a pre-unit Triumph build. If you’re confused about Triumph pre-unit and unit nomenclature, here’s a primer. Triumph’s Edward Turner penned the brand’s parallel twin engine in the mid-1930s. For the next 40 years, Turner’s twin remained in continuous production with relatively few changes. Except for this: prior to 1963 the Triumph twin engine was separate from the gearbox, and this style of construction is called pre-unit. After that, the gearbox became integral with the crankcase casting, thus a unit engine.

Pre-unit or unit, Klassen has a penchant for them all, and eBay became his favourite place to shop. On a pre-unit buying spree, he scored a 1962 duplex front frame loop and 1961 pre-unit Bonneville cases, crankshaft, and cams. He departed for the winter, but continued to shop for pre-unit parts from afar, having the packages shipped home to Calgary.

Returning early in 2010, Klassen was distracted from the pre-unit build when his son, Jody, who then owned an RC51 Honda, decided he wanted a bobber. “He said that if he could sell his sportbike, he’d throw the cash my way,” Klassen says. Working at his usual hectic pace, Klassen had another unit bobber completed by August 2010, and that’s the burgundy and cream high pipe machine seen here.

Starting with a 1968 Triumph front frame loop, Klassen fitted a David Bird two-inch-stretch rigid rear frame section. The Triumph fork has shortened legs for the correct stance and, to make it seem older than it is, shrouds in stainless steel from Calgary machinist Neil Lots. On top is a stock early ’60s Triumph handlebar and the inverted levers are copies of those found on pre-war BMWs. A Bates side mount headlamp completed the front end.

A Triumph Daytona donated its 19-inch front wheel and Dunlop K70 tire. At the rear is an early 1960s hub laced to an 18” rim, also shod in Dunlop K70 rubber. Klassen builds his own wheels, and after he assembled Jody’s hubs, spokes, and rims, Rite-Way Powder Coating of Calgary blackened them.

The engine is a 1971 650 cc unit with a single-carb TR6 head fed by a Japanese-made PWK flat slide carbure- tor. The high level exhaust is from Factory Metal Works. Ignition is by Boyer Brandsen and inside the replica Lucas battery shell sits a modern battery.

Oil is carried in a modified 1950s Triumph oil tank, and the fibreglass flat-track fuel tank was originally purchased for his pre-unit build. He didn’t like how it sat on his bike, but when he set it on Jody’s frame, “it looked fantastic.” Burgundy paint is Candy Brandy Wine by House of Kolors sprayed by Guy St. Pierre of Cyclemania Artworks in nearby Okotoks. The rear fender is a Wassell chrome front fender shortened to fit and fixed by Klassen’s own stays.

In order to maintain correct tire-to-fender fit (or, at least, the visual impression of the tightest tire-to-fender fit) Klassen did away with rear axle adjusters, instead fixing the axle in one place. Correct chain tension is accomplished with an adjustable 13-tooth idler sprocket on a sealed bearing. The licence plate holder (topped with a ’38 Ford duolamp taillight) was laser-cut to Klassen’s design.

After he finished his son’s Triumph, Klassen turned his attention again to the pre-unit bobber. A retired mechanical engineer by trade, he takes great pride in crafting quality machines that don’t leak oil and won’t leave him stranded at the side of the road. “If I can’t ride it, I’m not interested in it,” he says.

In the spring of 2011 Klassen dug in. To the 1962 pre-unit front loop he again added a two-inch-stretch David Bird rear frame section. The fork is unit Triumph lowered and fitted with B.S.A. Gold Star shrouds, and BMW-style levers grace a Norman Hyde handlebar. Wassell supplied both fuel tank and fender while the oil tank is 1954 Triumph. The distressed leather seats on both machines are from Rich Phillips Cycles. Up front is a B.S.A. Gold Star half-width hub with a modified Triumph axle and a 19-inch rim with an Avon Speedmaster tire.

Pre-unit Triumph heads were held to the cylinder with eight bolts, but the year Triumph switched to unit construction, a ninth bolt was added to the centre of the head to prevent head cracking. Installing a nine-bolt cylinder and barrel on pre-unit cases is an easy proposition. But Klassen wanted the look of the smooth, non-finned eight-bolt pre-unit rocker boxes, a task that required alloy welding and machining from Derek Pauletto of Calgary’s Trillion Industries.

Topping the head is a pair of Amal concentric carburetors, while the stainless steel exhaust pipes were Klassen’s attempt to replicate what Falcon Motorcycles had fabricated for their Triumph-based Bullit bike. He sent images of what he wanted to a pipe bender in California, where they pulled some long radius bends in 1 5/8” diameter pipe. Back in Calgary, Klassen and Pauletto then cut and welded the bends to create the finished product.

During a 2010 trip to Los Angeles, Klassen visited Earl Kane’s motorcycle shop, where he saw the traditional metal flake paint jobs for which Kane is highly regarded. Kane does not communicate via email, so Klassen called and asked if he’d paint the gas and oil tanks and rear fender in 1960s gold and brown hues. Six weeks later a box arrived at Klassen’s door with the finished goods. “I was stunned, it was bright and bold, but it was awesome,” he says. Powder-coating the pre-unit’s rims, hubs, and frame was done by Top Gun Coatings in Calgary, and the cadmium plating of fasteners on both bikes was by Victoria Plating on Vancouver Island.

After building three Triumph bobbers in as many years, Klassen has shifted from building to riding. Outfitting the pre-unit bike with a 19-tooth engine sprocket and a 43-tooth rear wheel sprocket makes for smoother cruising between 60 and 70 mph. In early September, he and a group of friends toured in the vicinity of Nakusp, B.C. — a favourite spot for sport bike riders, and now, it would seem, bobber riders. At the close of the season, Klassen’s Smiths chronometric speedometer had recorded over 2,000 miles — not bad for a machine built at the altar of style.