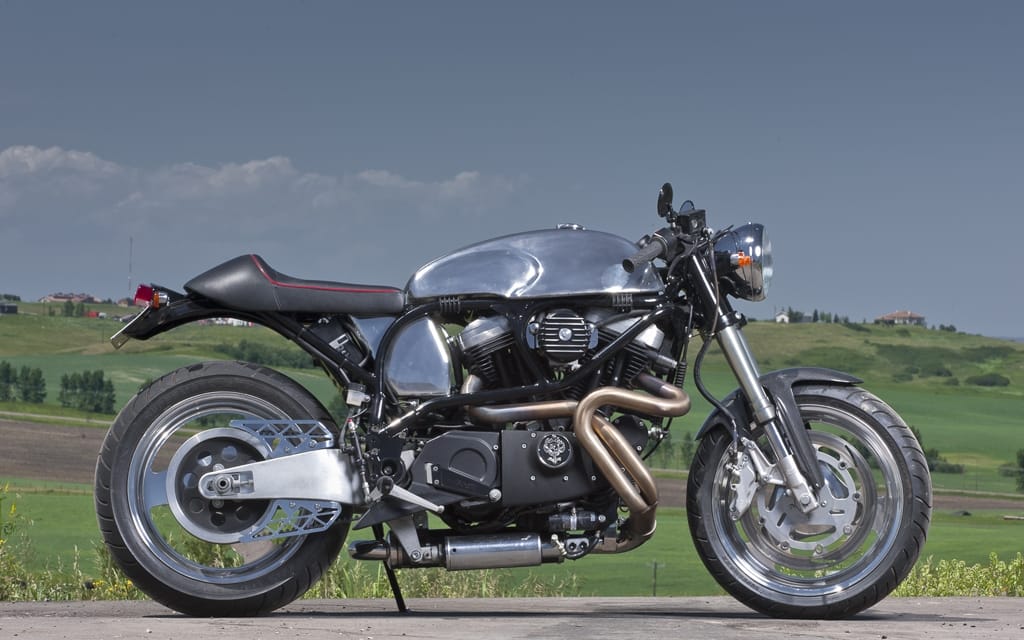 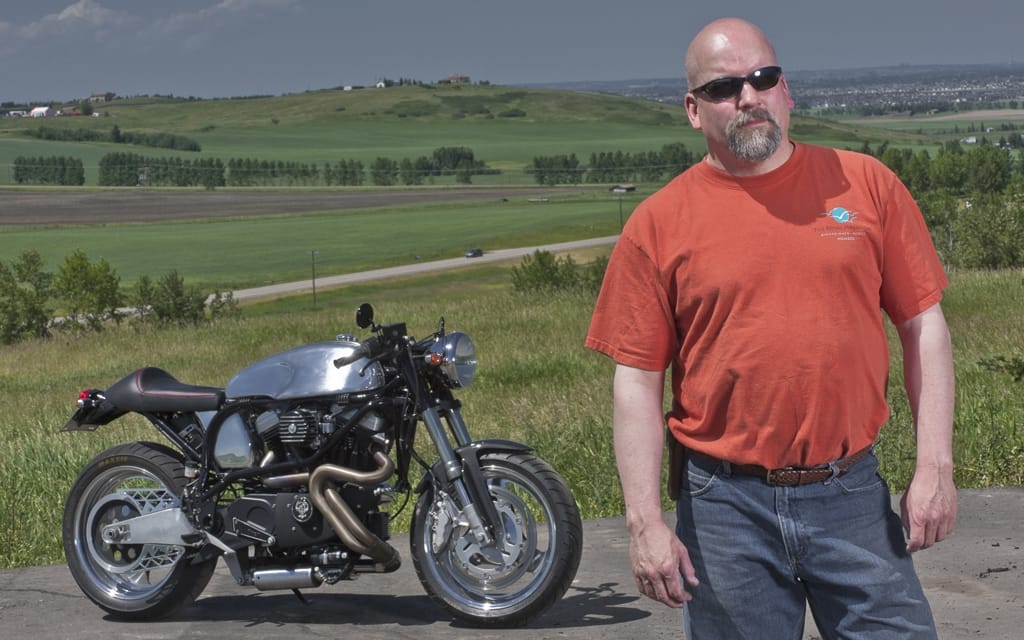 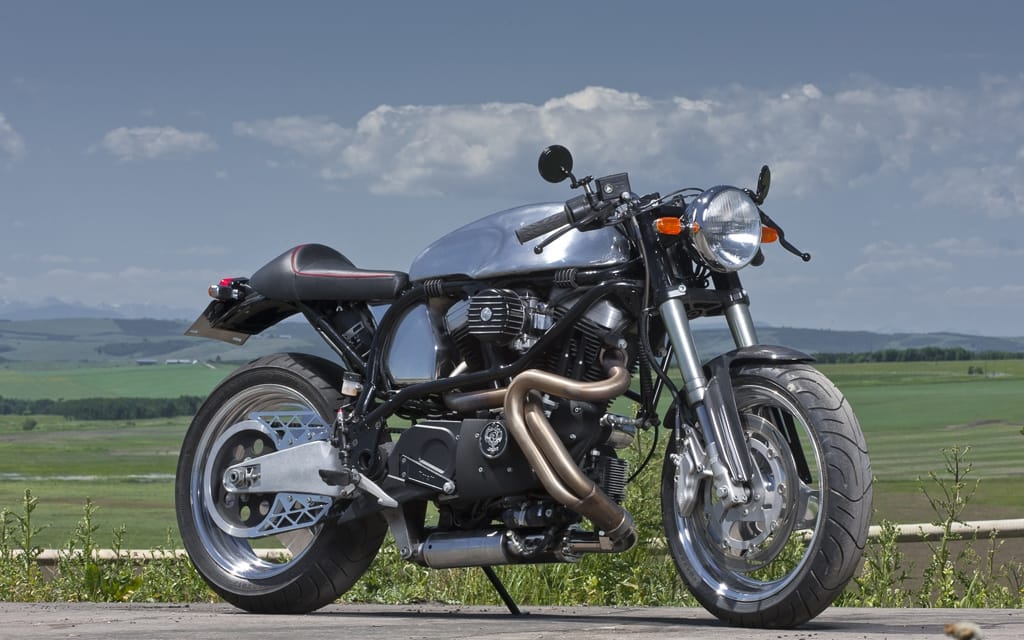 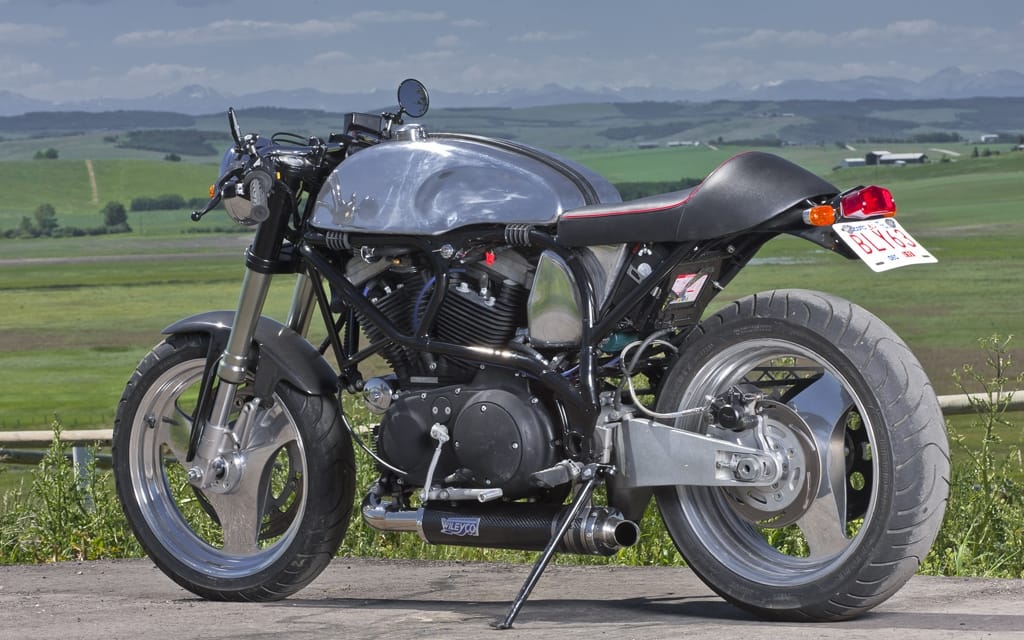 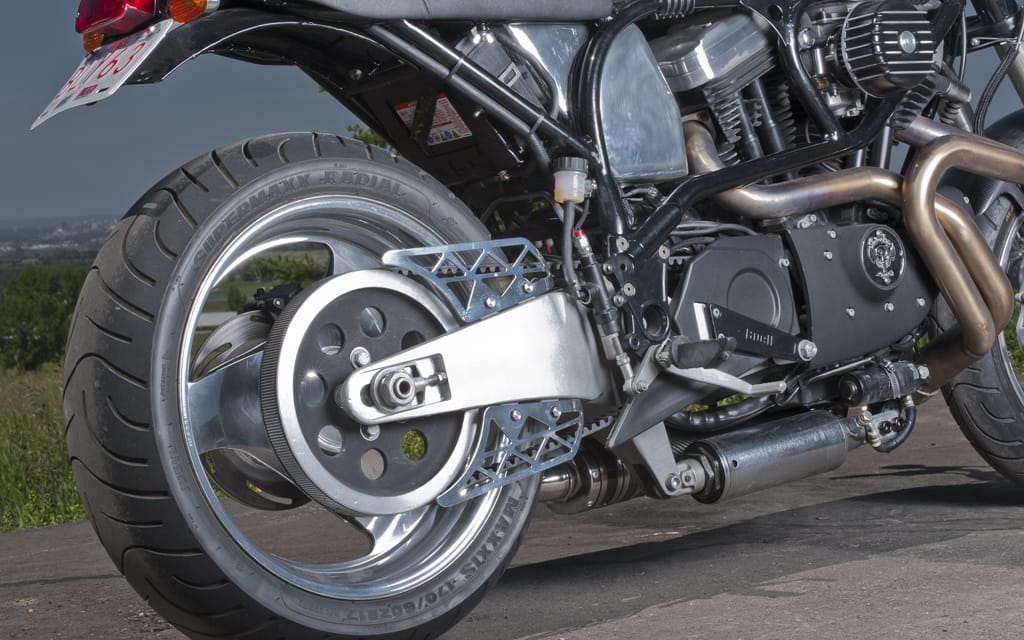 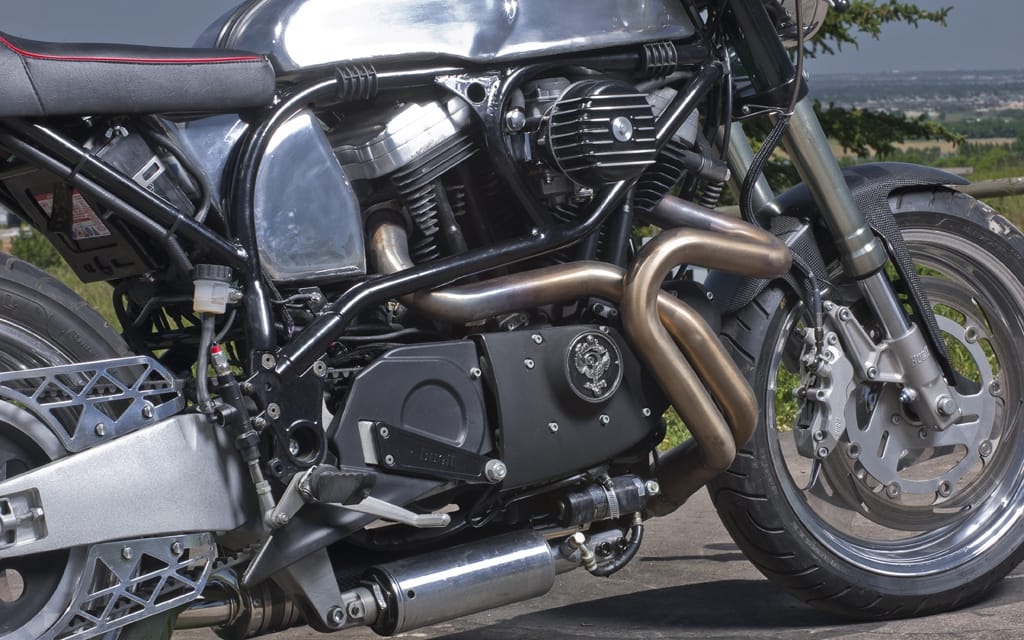 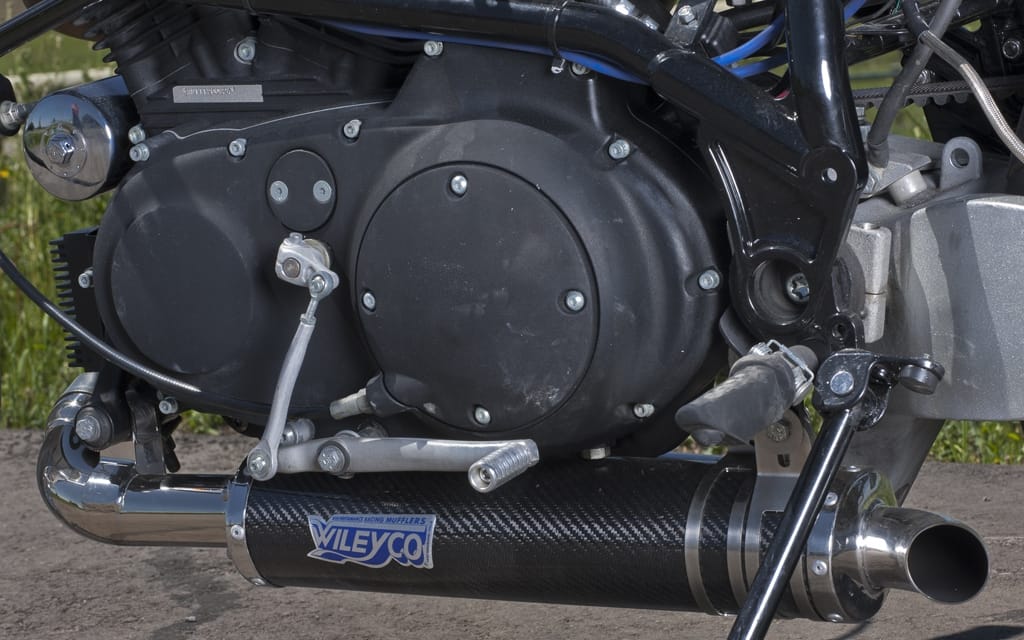 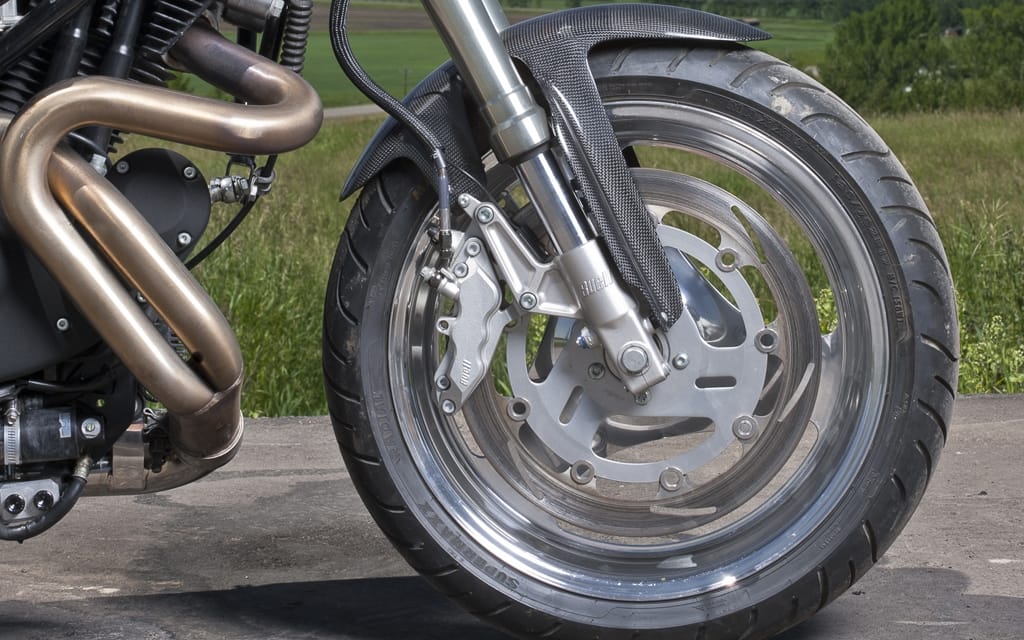 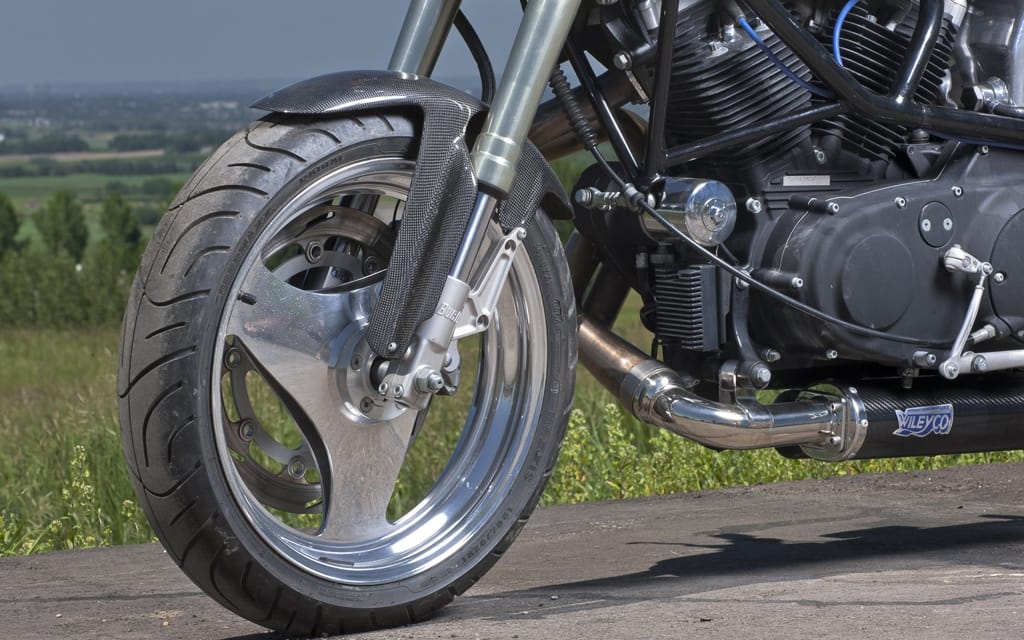 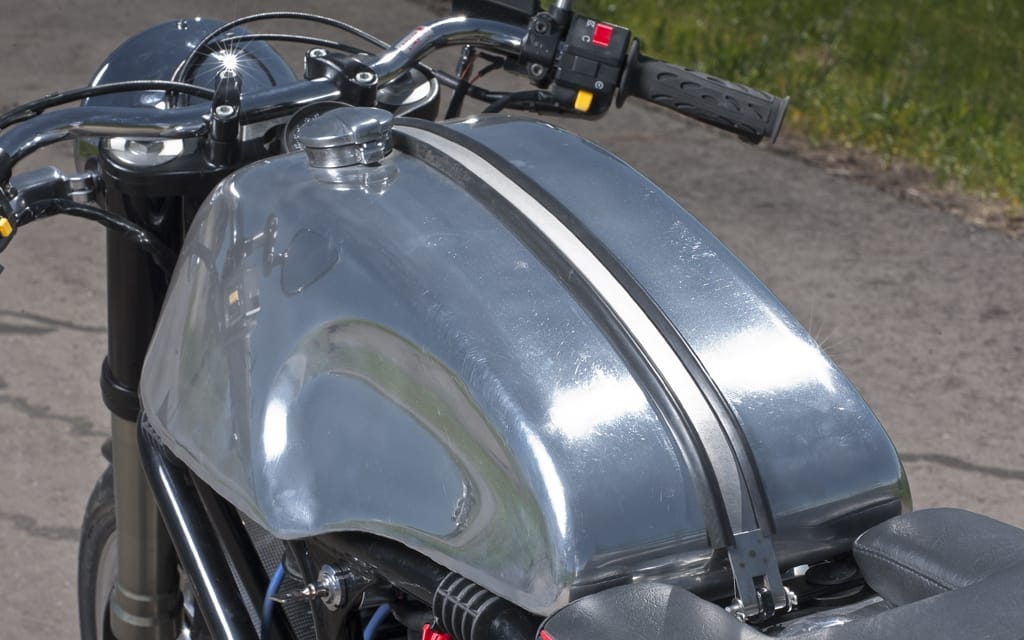 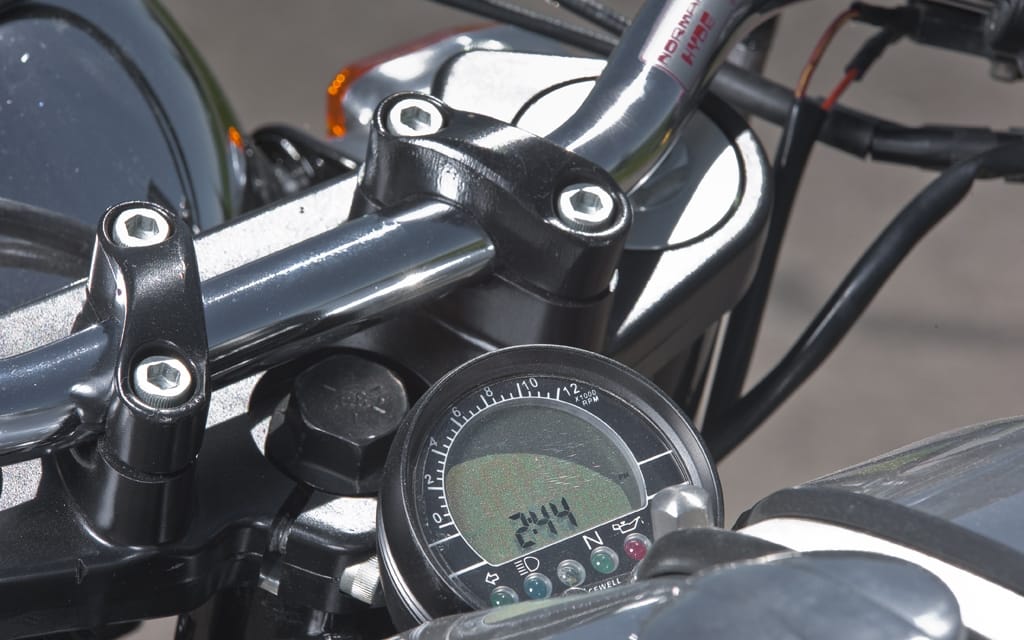 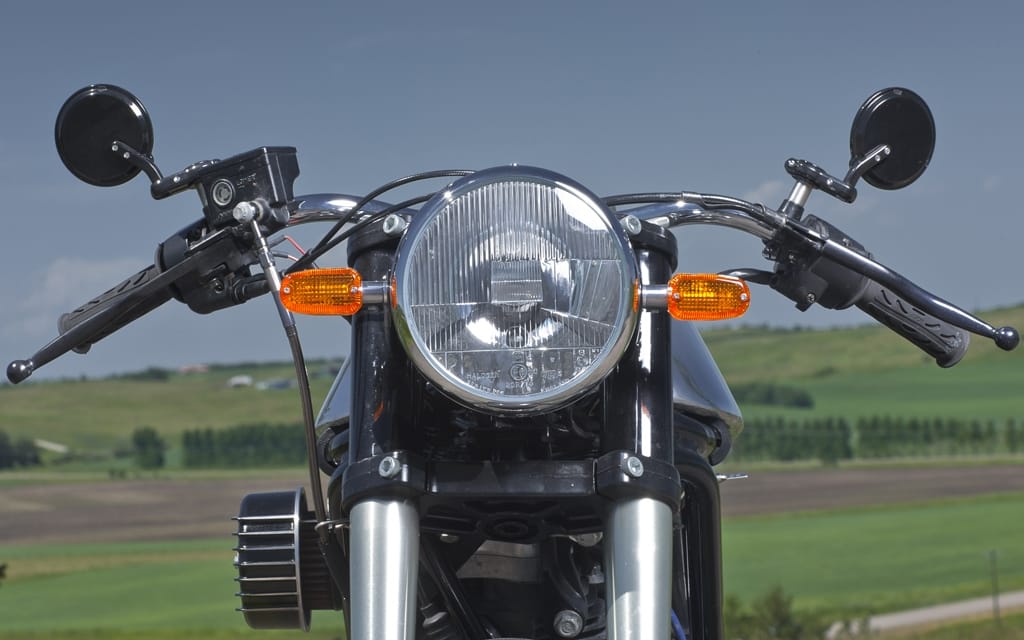 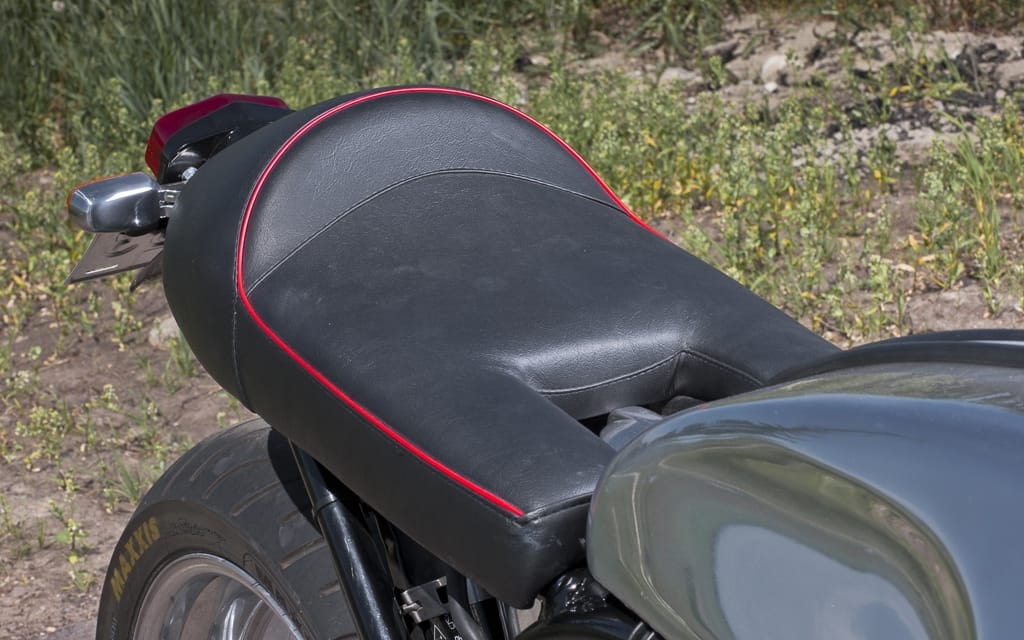 John Whitby is a motorcycle-building machine.  His friend and the owner of bike breaker TJ’s Cycle in Calgary, Mark Blundell, has Whitby figured out. It’s like this. Imagine a meat grinder. Pour a bunch of parts into the hopper and turn the handle.  Just like magic, instead of hamburger, out pops a motorcycle. In less than two years Whitby completed a 1928 Model T rat rod and three motorcycle projects from the ground up. One of those bikes is the 2001 Buell X1 Lightning café racer seen here — it took him five months to crank this one out.

Whitby was raised around motorcycles and since 1971 hasn’t been without one. For the past 20 years he has spent almost every Saturday working at TJ’s Cycle, something of a break from his regular gig. Besides being a talented engine builder and a wheelwright, he can weld and run a metal lathe.  These skills serve him well when turning used or cast-off parts into functional pieces.

The Buell rolled into TJ’s Cycle as an unfinished project, the owner wanting a few bucks to be clear of the nonrunning motorcycle. “I don’t know exactly what they were trying to build, but at least it wasn’t a crash victim — just a project that had gone south,” Whitby says. Curious about why the Buell wasn’t running, Whitby and Blundell took the bike into the shop.  They pulled the spark plugs to find no gap in either one. A new set were correctly gapped and threaded home, and with a battery and fuel the Buell fired.  After that success it was pushed into the corner, becoming a project low on the shop’s priority list.

Whitby is often paid in motorcycles or parts for his Saturday’s labour at TJ’s. A little more than a year after the Buell arrived, Whitby told Blundell it was time to do something with the hulk, and he wanted the bike. His plan? Build a British-style café racer on the American platform.

In the shop at TJ’s, Whitby stripped off all the non-essentials, including the wiring harness and fuel injection equipment. From R.G.M. Motors in the U.K. Whitby ordered an alloy Lyta-style three-gallon short circuit Norton fuel tank suitable for a Norton Wideline frame. He also bought an alloy oil tank and a seat to match. Whitby waited for these components to arrive before cutting the Buell’s frame rails.

Ultimately, the top half of the frame was cut away and with the Buell frame locked in a jig, the headstock was reinforced and new top tubes —2 1/2” lower than the originals — welded in place.

Whitby then took the Buell home, continuing the job by bending and welding the rear subframe to support the seat and rear fender. Found in the yard at TJ’s, the rear fender is thought to be the front fender from a BMW R1200C. The valances were pared away and the sides and middle reinforced so it could be mounted to the frame, and Whitby topped it with an Emgo Lucas-style taillight.

The front fender is an aftermarket carbon fibre unit purchased on eBay, and the headlight is also an Emgo Lucas-style unit, equipped with a Wipac halogen bulb. To make a headlight mount, he trimmed a set of headlight ears from their original mounts and welded them to automotive exhaust tubing. The handlebar is from England’s Norman Hyde and is equipped with stock Buell switchgear and controls.  In fact all the running gear, including the Buell fork, wheels, brakes, and tires, were left as found.

To clear the rear header pipe the output on the new oil tank migrated from the right side of the vessel to the left, a task performed by alloy welding expert Derek Pauletto of Trillion Industries in Calgary.  The tank is a tight fit in the frame, and it must be in place before the engine is bolted into position. The Buell’s original battery tray is mounted behind the oil tank and accessed by removing the seat. Whitby made a support for the Acewell digital speedo that is tucked into the opening at the front of the fuel tank tunnel.

Continuing to crank the handle of this motorcycle-building meat grinder, Whitby threw a Sportster carburetor into the hopper and machined a sumpcover from a Yamaha XS1100 to fit over a K&N filter for a Yamaha YSR50. A Dyna ignition was wired into Whitby’s custom harness. Calgary Powder Coatings finished the frame in black, and Whitby painted the fork trees and ears. The rest is all polish, and the alloy gleams brightly.