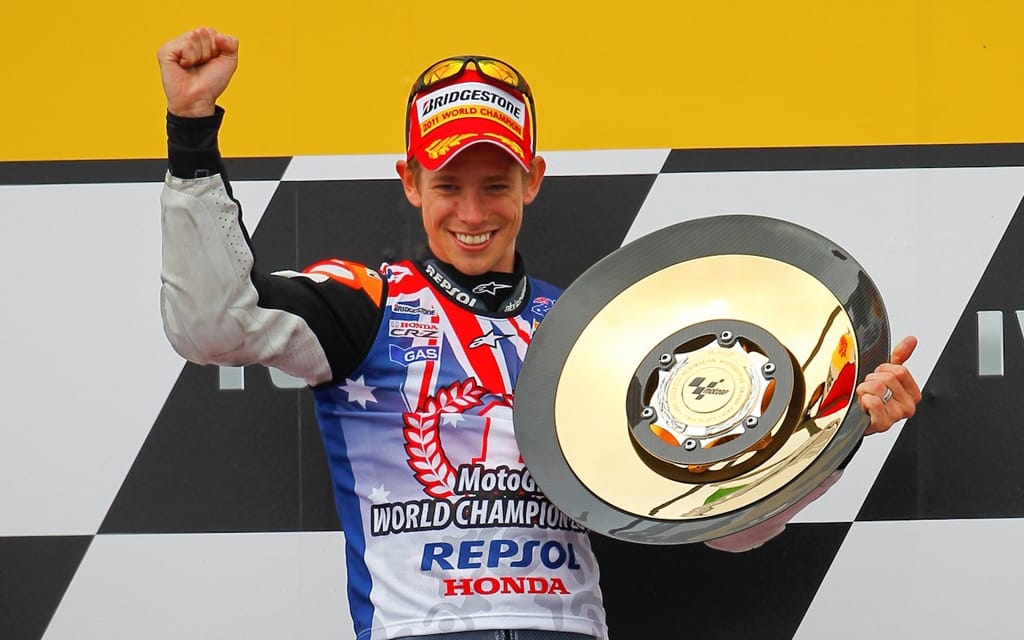 Casey Stoner clinched the 2011 MotoGP championship today on his birthday and on home turf at Phillip Island in Australia. It is the fifth consecutive Australian GP win for the 26-year-old factory Honda rider and his second premier class championship. He won his first title in 2007 while at Ducati.

Stoner needed only a sixth place result today to clinch the title, after defending champion Jorge Lorenzo lost the tip of his left ring finger during a morning warm up highside crash and was deemed unfit to race. But the Australian led the race from start to finish to top an all Honda podium. Marco Simoncelli won a close battle with Andrea Dovizioso for second, while Dani Pedrosa trailed in fourth. Colin Edwards rounded out the top five and was the top Yamaha rider at Phillip Island. Lorenzo’s factory Yamaha team-mate Ben Spies was also unfit to race, after sustaining a blow to the head during a high speed qualifying get-off. Valentino Rossi’s season woes continued in Australia. The Ducati rider moved up four places into seventh on the opening lap, but ended his day early at the race’s half-way point, when he lost the front in turn 10 under slippery conditions brought on by light rain — his second crash in two races. Non of the riders pitted to change to rain tires and Stoner too had a late race scare due to the wet conditions, prompting him to back off of his six-second lead to a more conservative pace and cross the finish line 2.210 seconds ahead of Simoncelli.