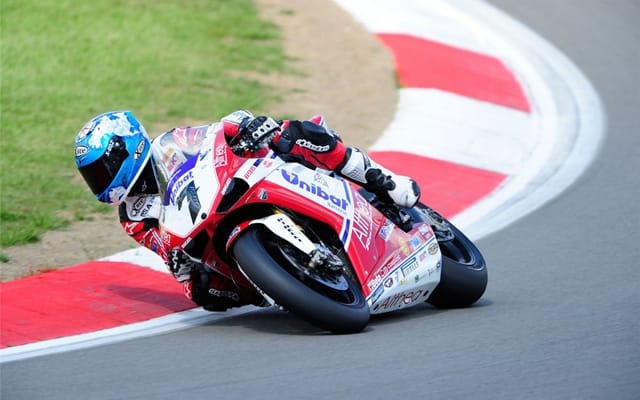 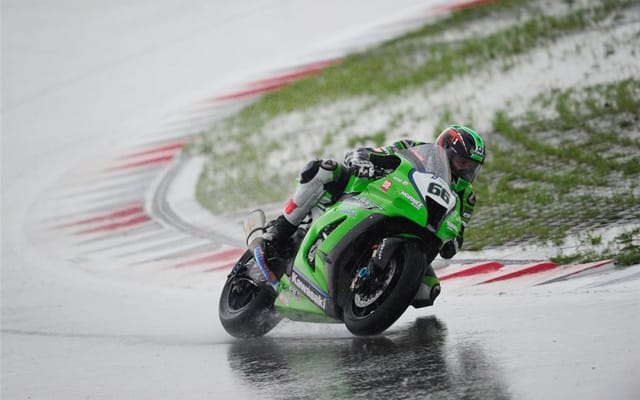 Carlos Checa extended his championship lead at the Nurburgring in Germany on Sunday, by winning race one and hanging on to finish a treacherously wet, crash plagued, race two, while his rival and defending World Superbike champion Max Biaggi was sidelined with a broken foot. Biaggi managed to qualify on the front row after suffering the injury during practice on Friday — apparently he was hit by a flying rock — but ultimately was unable to race.

Checa, starting once again on pole, traded the lead back and forth with Noriyuki Haga (PATA Racing Team Aprilia) during the early stages of race one, with Yamaha team-mates Marco Melandri and Eugene Laverty dicing for third just behind them. But by lap six Checa had the lead and Melandri was able to go around Haga for second. The Italian though would not be able mount a serious attack on the front running Althea Ducati rider, as Melandri ran wide the next time around, allowing Haga and Laverty to get by. Melandri eventually fought his way back into second, but ran out of time to reel in Checa, crossing the finish line almost two seconds adrift of the Spaniard. Haga finished third, Laverty fourth, and BMW’s Leon Haslam, fifth.

The skies opened up for race two at the Nurburgring, creating a crash-filled shortened event that saw PBR Kawasaki rider Tom Sykes take his first-ever WSBK victory. Noriyuki Haga led from lap one onward to open up an eight second lead, but crashed out in treacherously sodden conditions on lap 8 and gifted Sykes the lead, which he held until the race was finally red flagged with six laps remaining. Effenbert-Liberty Ducati team-mates Sylvain Guintoli and Jakub Smrz were awarded second and third place respectively, while race one winner Carlos Checa finished a conservative eighth. Marco Melandri placed sixth, but Checa still gained the most points in the round, increasing his season total to 376. Melandri meanwhile leapfrogged over the injured Biaggi into second overall, 74 points adrift of Checa.

Many racers lashed out at race officials for running race 2 in such horrible conditions for as long as they did (see video footage below). Leon Camier, Leon Haslam, Jonathan Rea, James Toseland, Mark Aitchinson, Makoto Tamada and the unlucky race leader Noriyuki Haga all crashed out (although Haslam and Rea were able to rejoin). Melandri was particularly vocal about his displeasure, speaking after the race during an interview on Italian television he said, “They treated us like idiots, they were criminals. When it stopped raining they red flagged the race, only because 75% of the race was completed and by then the track was becoming pretty good and the critical moment was over. It’s not right, ruining the races like this. Shit, when Eugene [Laverty] and I started to complain … and I think others also complained… it should have been stopped and then re-started, we knew that it wouldn’t have rained that hard all day.”

The next race takes place September 24 at Imola.