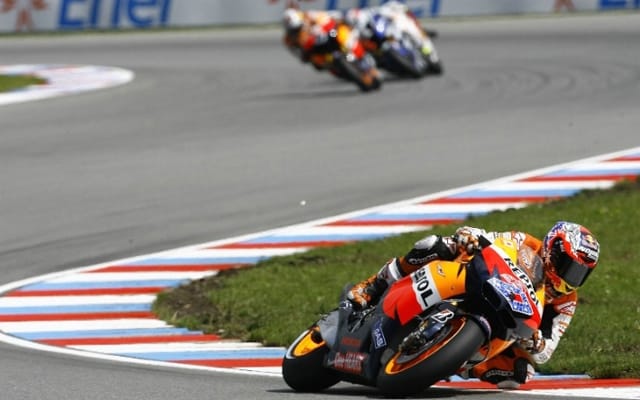 It was an all Honda podium at the Brno Grand Prix in the Czech Republic today, with Casey Stoner once again at the top of the box. The Australian overcame the handling problems that hindered his performance during qualifying and practice to cruise to his sixth win of the season and increase his championship lead over Yamaha’s Jorge Lorenzo to 32 points.

Lorenzo chose a soft front tire for the race and was able to grab the lead off the start ahead of pole sitter Dani Pedrosa. But by lap 3 Lorenzo’s tire strategy began to noticeably backfire, allowing the Repsol Honda riders to make their way by the reigning champion. Moments later though Pedrosa crashed, handing Stoner a lead he would keep to the checkered flag. His other team-mate Andrea Dovizioso finished second, 6.5 seconds back, with Gresini Honda’s Marco Simoncelli close behind in third for his first-ever premiere class podium. Jorge Lorenzo meanwhile, could only manage fourth.

“If we look at points it’s an important win, and it couldn’t work out much better. This weekend has been very, very tough and I was a little bit worried going into the race as to how competitive we’d be,” said Stoner of his victory.

“As soon as the race got underway I was having a good battle with Andrea, but this cost me a little time and I was afraid that Jorge and Dani would stretch away from me. But when I got past I found I had plenty of speed to catch up and the bike felt great.”

“I passed Jorge and then Dani sadly crashed out so I pushed to see if I could pull a gap. I put in a heck of a lot more effort and decided to lay it on the line. Once we had the break I just concentrated on consistency and brought it home.”

“Again it’s a fantastic result. This one felt good.”

The next race takes place at Indianapolis, August 28.