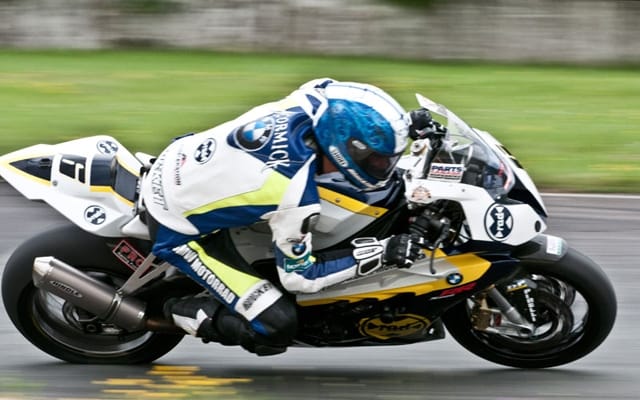 Brett McCormick continued to dominate the 2011 Canadian Pro Superbike Championship series on Sunday. The 19-year-old BMW rider won his fifth race of the season at Atlantic Motorsports Park in Shubenacadie, Nova Scotia to keep his perfect record intact and give himself a  55-point lead over defending champion Jordan Szoke heading into the season ending double-header at Mosport in two weeks time. A win is worth 50 points.

Szoke, who won the pole position for the second consecutive round, could only manage the runner-up position in the main event. McCormick led the 22-lap race from start to finish.

“I had a tough weekend overall,” said McCormick, after recovering from a fall during qualifying to ride his back-up bike to the win. “But the bike seems to be working so good that I can have an off weekend and still wind up on top. But Jordan didn’t make it easy for me today.”

“It’s a disappointing day, we seem to keep getting second place,” said Szoke of his fourth straight runner-up finish of the year. “I thought we had him this weekend. I had a bad start but that didn’t seem to matter. I was making a few little mistakes here and there. I feel really comfortable. We just need to find a bit more.”

“It was a pretty wild race; I certainly wasn’t expecting to get on the box,” said Christie. “I spent a lot of time waiting but I knew I needed to get by Alex and put in some strong laps.

Frank Trombino, who sits third in the Sport Bike category, rounded out the Superbike top five.