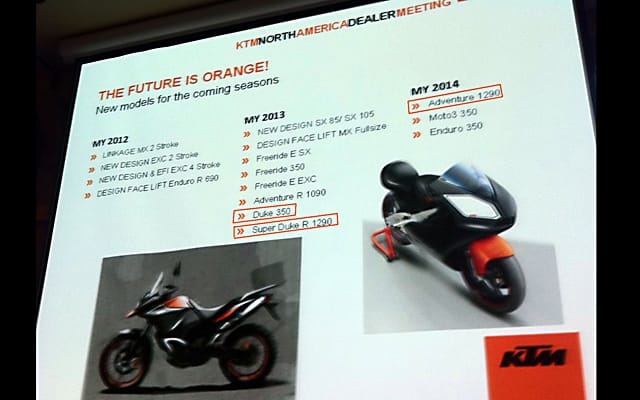 If we believe this thing is legit, here’s what we can discern. There’ll be no new models in the coming year; just a cosmetic overhaul for the Enduro R690 and upgrades to three off-road models.

2013 brings a couple more off-road face lifts and the release of the Freeride —KTM’s first electric model — in motocross (SX) and Enduro (EXC) variants, plus a curious 350 version (perhaps a higher-powered electric off-roader?). The single-cylinder Duke 350, thought to be an India-only model, will also arrive in North America in 2013, as will a stop-gap Adventure R 1090 and a new Super Duke R, powered by an all-new 1290 cc engine and rumoured to be completely mechanically and aesthetically redesigned.

The following year sees the Adventure getting the new 1290 cc mill and KTM introducing two new 350 cc bikes, an enduro and the intriguing Moto3. Speculation is the that the 2014 Moto3 will be the company’s next sportbike, a 350 cc road-going version of the manufacturer’s 250 cc Moto3 racer. KTM head honcho Stefen Pierer has championed smaller displacement sportbikes — low-priced machines, with usable performance and handling — in reaction to the recent worldwide slump in motorcycle sales, and it looks like the Moto3 is bringing that idea to fruition, as a new RC8 superbike is noticeably missing from the list.