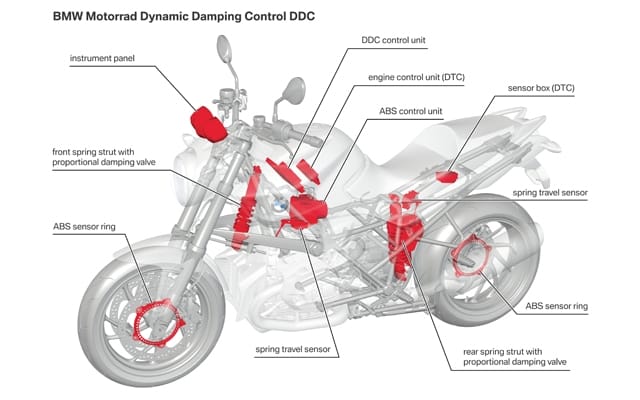 The new system works with ESA II ‘comfort’, ‘normal’ and ‘sport’ settings to automatically adjust damping on-the-fly in reaction to the riding situation at any given moment. Using inputs from the bike’s electronic control unit, wheel mounted ABS sensors, spring travel sensors and tilt and roll sensors, DDC decides what settings to use, constantly altering damping as you ride to compensate for acceleration, braking and cornering forces.

When the rider brakes, the system applies more damping up front to prevent nose dive. Should you be leaned over, damping on both wheels is automatically adjusted for increased  stability – all while taking the motorcycle’s speed into account. The adjustments to damping, says BMW, also depend on whether the springs are compressing or rebounding, with DDC controlling each process in a separate manner.