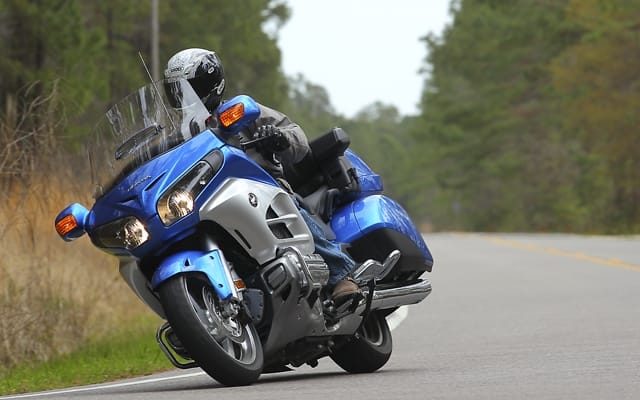 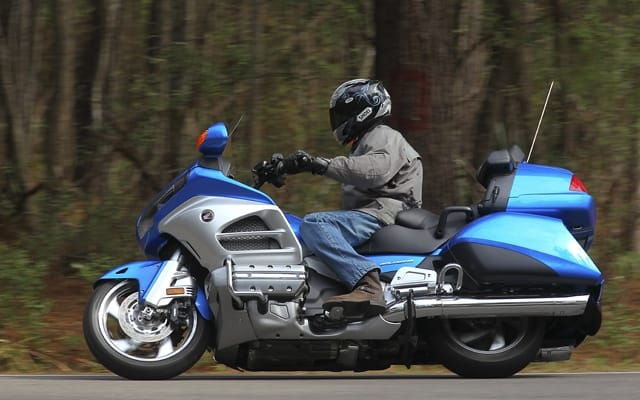 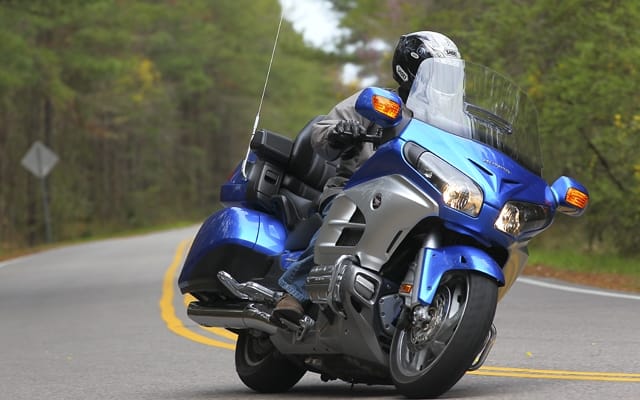 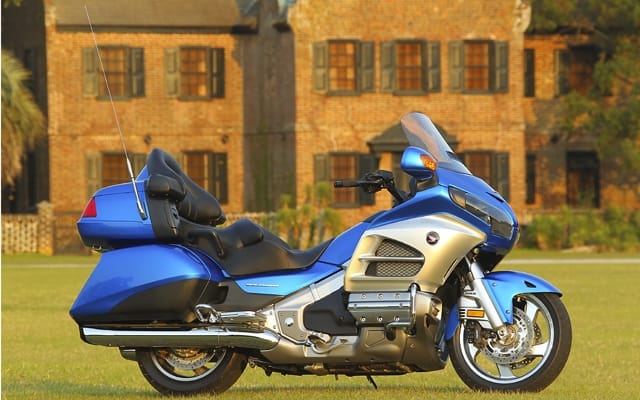 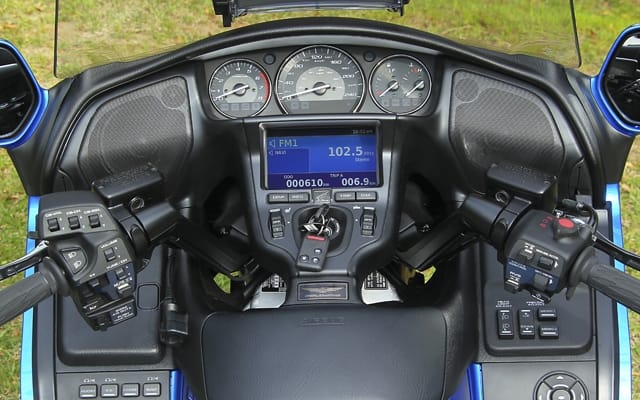 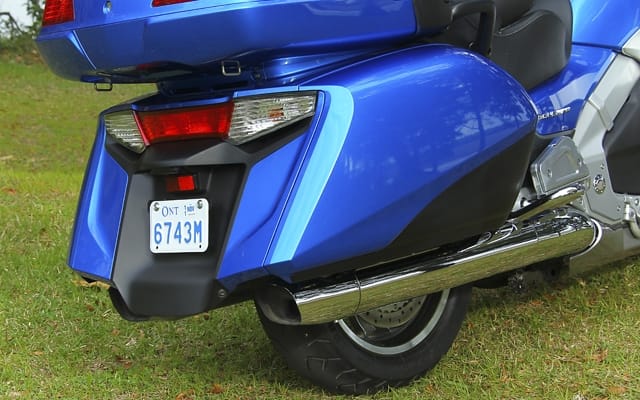 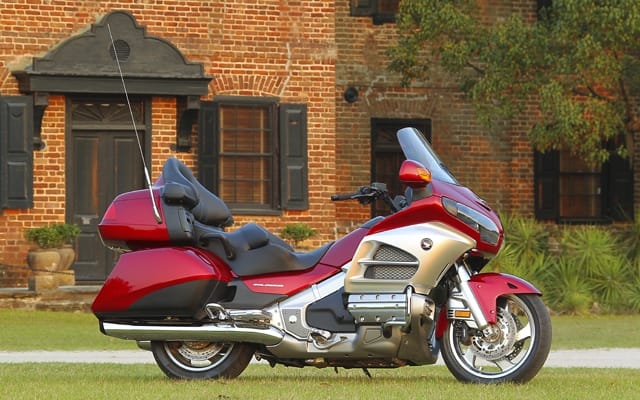 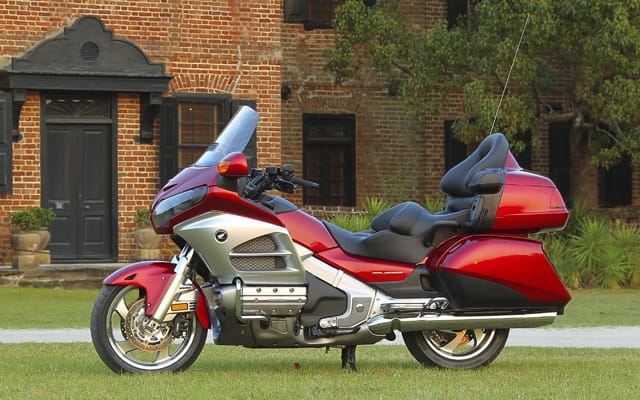 It is one of motorcycling’s greatest nameplates. But it’s time we had a discussion on the future of the Gold Wing.

In the press material provided by Honda for its re-jigged 2012 Gold Wing, two numbers and two sentences merit further inquiry. The numbers — 904 and 933 — indicate a range in pounds of fully fuelled weights depending on options. And the two sentences read as follows: “A simple yet ingenious ratcheting windscreen-adjustment system provides six settings over nearly 4.0 inches of travel. Operated manually, the mechanism eliminates the weight and complexity of electric motors.” Afraid of adding weight and complexity on a motorcycle that comes with a tire pressure monitoring system and that can be ordered with an airbag? Certainly that can’t be true.

If you’ve never ridden a Gold Wing you may think that they’re a hideous abomination and an affront to motorcycling itself, but I’m here to tell you that you’re wrong. If you’re moving it around the garage or catch yourself out pulling a U-turn on loose gravel, it’s a tank, to be sure. (After all, this is a machine with a reverse gear, which is as useful as it is telling.) But as long as you manage lean angle and don’t ride so aggressively that you pirouette off a footpeg jammed into the tarmac, at speed it’s a light-footed and agile machine. Really. As a kid I read in my brother’s Car and Driver a story in which the author vigorously slalomed down a winding road in his MGB. He was drifting through corners and the needle on the tachometer routinely leapt into the red. And then a guy in an Impala, one hand on the steering wheel and one arm draped around his gal, blew past. I never think of that story without thinking of the Gold Wing. I have, two-up, distanced myself from competently ridden sportbikes by using the Wing’s great handling and guttural power delivery. But that the Gold Wing is a capable motorcycle isn’t really at issue.

The Gold Wing, the brand-within-a-brand that it is, is stuck, because Honda is terrified of alienating the faithful. BMW, when it was developing its six-cylinder K1600, had no qualms about alienating fans of its big touring rig, the K1200LT, because few were even aware of its passing. But Honda product planners simply must not screw up the Gold Wing brand, which is as synonymous with luxury touring as the Kleenex brand is with the cold and flu season.

The introduction of the Gold Wing in the ’70s was a radical move. Honda brilliantly merged car-like reliability (which in the ’70s was still a new concept in motorcycling) with a keen understanding that long distance riders would support a purpose-built motorcycle. And it was done in an era in which household incomes and leisure time spiked. History has proven that both the idea and its execution were flawless. But the only thing more stifling to innovation than failure is success. Then you have something to lose. After some lacklustre, misguided motorcycles (DN-01, anyone?), Honda has become timid right where they need to be bold.

Worldwide Gold Wing production, which had been in Marysville, Ohio, for much of the last decade, has returned to Japan. (Honda had excess 2010 stock, and in conjunction with the manufacturing relocation, the decision was made to skip the 2011 model year and introduce this bike as an early release 2012 model. It is in Canadian dealerships as you read this, though at press time prices had not been announced.) The change in manufacturing venue prompted Honda to update the Gold Wing, though it did not, as had been rumoured, come out with the next-generation model.

The most obvious change is the two-tone body colour — made, says Honda, to give it a “sporting edge,” and that includes the quintessential update: restyled tail lights. Less obvious changes are revised suspension settings to counter the criticism that the bike isolated the rider from road feedback. Having criticized the bike in the past for this very reason — and having started the test ride on the 2010 model — I was embarrassed to find that feedback was better than remembered. When I switched to the 2012 model there was a slightly more tactile sensation of the road surface, but it wasn’t radically different than the 2010 model’s — and it didn’t need to be. Redesigned lower fairing ducting improves wind protection for the rider and larger saddlebags add seven litres of stowage capacity, to bring the total to 150 litres. The biggest change to the Gold Wing for 2012 involves the electronics, which includes a GPS system that allows routes to be shared with other riders and a surround-sound system that will accept an MP3 player or iPod. A stereo system on a motorcycle is an idea that I don’t warm to — helmets and wind noise do not fit with music, in my view, though I acknowledge that I’m in the minority on this topic.

Which brings us back to the fairing and the windshield, which are, quite frankly, where development time and money should have been invested. The idea that it saves weight to have a mechanical system to adjust the windshield on a motorcycle of over 900 pounds is, of course, nonsensical. But electrification of the windshield isn’t the point. A mechanical system would be perfectly fine if it was an outstanding design, but moving the Wing’s windshield involves wrestling the screen up and down by hand once two levers have been thrown. Sometimes it sticks. Sometimes it doesn’t. It would be one thing if the fairing were quiet. But it’s not. At a steady 120 km/h buffeting is significant compared to some of the designs of other brands. In the time since the Gold Wing’s fairing was developed the understanding of how to manage airflow has marched on. But the Gold Wing soldiers on, two-tone paint jobs and restyled taillights notwithstanding. It’s become fashionable in recent years to bash Honda motorcycles, but it’s important to take the long view. No marque in the history of the vehicle has been more significant than Honda, and perhaps no marque ever will be. A strong, striving Honda pushing at the boundaries of motorcycle efficiency and design is essential for all of motorcycling, even if you choose to ride something else. The reason is that other brands are forced to keep up, and in keeping up sometimes they leap ahead, which causes Honda to reinvigorate itself and strive further. I want Honda to make a Gold Wing that is as revolutionary as the original, a motorcycle that will cause the designers and engineers of touring motorcycles at other brands to work late nights just to catch up. They may not like it, but it would be good news for you and me.