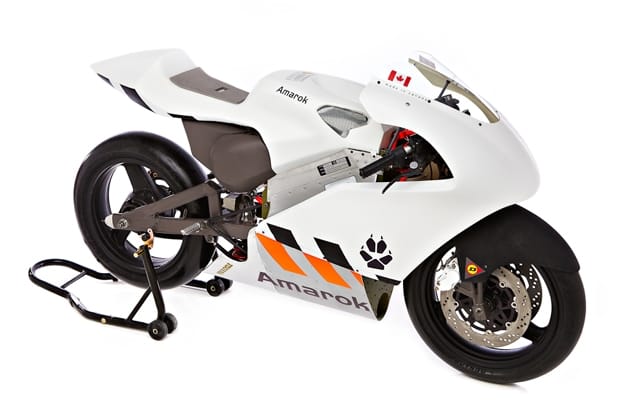 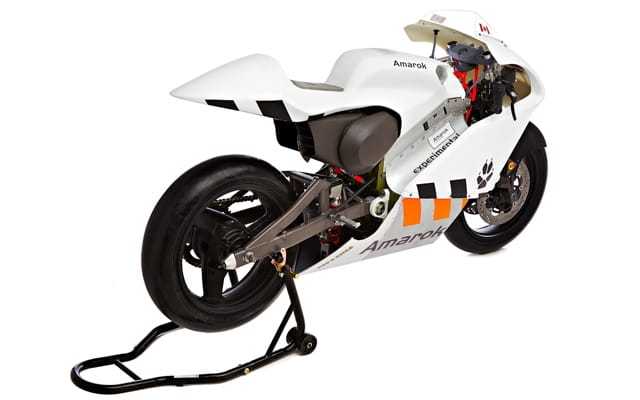 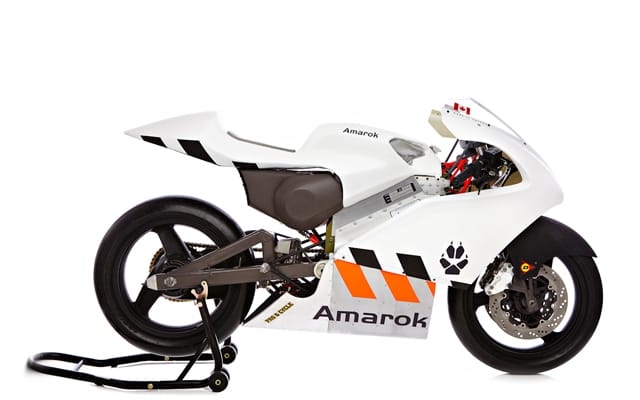 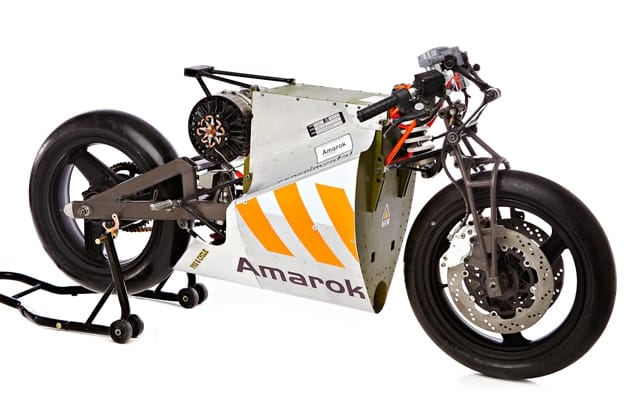 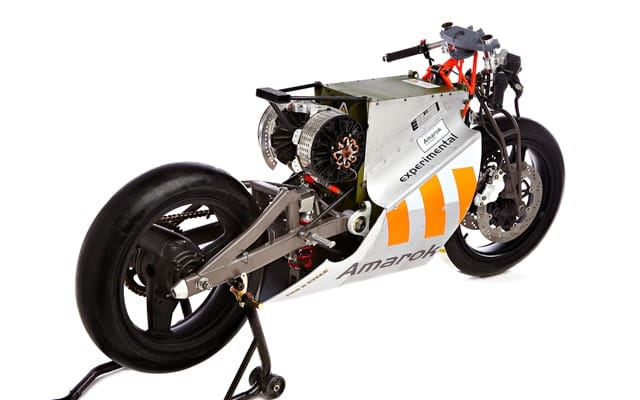 Powered by two Agni 95R DC motors coupled with 7.5 KwH of lithium batteries, the Amarok P1 tips the scales at a svelte 147kgs (325 lbs), making it one of the lightest electric sport motorcycles in existence, according to its manufacturer.

Amarok says their goal with the P1 was  to achieve maximum power-to-weight ratio and optimize handling by rethinking conventional motorcycle design and engineering. The P1 features a frameless aluminum monocoque design that incorporates the structure, battery storage and the fairing all into one, which, according to it’s builders, eliminates duplication, optimizes distribution of loads and reduces weight across the system.

“Ever since I saw the first modern electric scooters in the mid 2000’s, I felt that the time was ripe to approach motorcycle design like an aerospace vehicle, and integrate the body, frame and battery into the same structure,” says Uhlarik. “Since the 1930’s, airplanes have relied on all-stressed skin, aluminum monocoques for superior strength, lower weight and packaging efficiency. Batteries already have strong and bulky structures, so why not design them into shapes that give them enough strength to support the entire motorcycle and rider vehicle system, while sculpting them into an aerodynamic package?”

Also of note is Uhlarik’s incorporation of a Hossack-type double wishbone front suspension system (think BMW’s K1200R “Duolever”) on the P1, instead of the conventional telescopic fork seen on every other electric superbike out there so far. Again, “It’s all about shedding weight,” says Uhlarik. “The basic idea is that unlike a conventional telescopic fork which wants to lever the headpipe off of the frame, the Hossack distributes loads evenly, and horizontally, into the chassis.  This means less stress and less material needed to do the same job.”

Uhlarik says he and O’Neill will continue developing their prototype to shed even more weight and increase its power-to-weight ratio further: “It is our design target to achieve a weight of 125kg (275 lbs) with the next generation P2, giving us power-to-weight parity with a gasoline-powered 250 cc Grand Prix bike. I want Amarok to prove that with battery electric vehicles, less really is more. Less heavy, costly batteries, but more performance and better handling.”

Amarok has acquired the services of veteran AMA and CMA racer Joe Temperato (of Pro6 fame) to help them develop their bike for the track, and if all goes according to plan, the P1 will make its racing debut at Portland International Raceway on July 16, during round three of TTXGP North America championship.