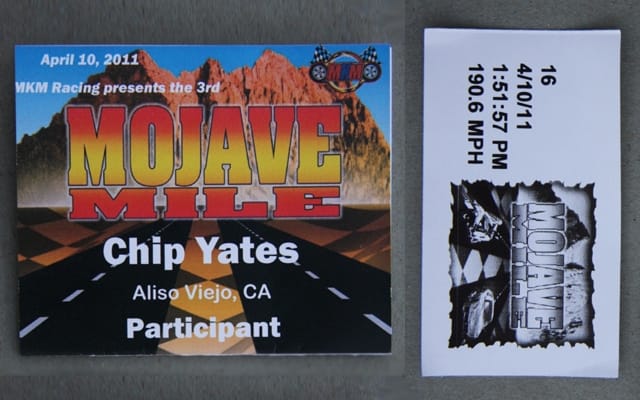 Already the first electric superbike to compete and podium against gas powered motorcycles, Chip Yates and his SWIGZ.COM Pro Racing team have now added world’s fastest e-bike to their list of achievements. On April 10 Yates recorded a top speed of 190.6 mph (307 km/h) during a one-mile run on his electric sportbike at the Mojave Mile Shootout. Though Yates’ record is still unofficial, it shatters the previous e-bike land speed record of 173 mph (278 km/h) set by Lightning Motors at the Bonneville Salt Flats in 2010.

Yates and team are now preparing their world’s fastest e-bike to compete at the 2011 Pikes Peak International Hill Climb.

Below is a video and description of Yates’ record setting run courtesy of his YouTube channel.

On April 10, 2011, while busy preparing the world’s most powerful electric superbike for the upcoming Pikes Peak International Hill Climb, the SWIGZ boys decided to pop over to Mojave Airport for the Mojave Mile Competition, where Chip Yates hit 190.6 MPH in only his second and final run, instantly becoming the fastest electric motorcycle in the world! Speeds of over 200 MPH for the superbike were predicted, but a faulty generator blew up the team’s two charging systems so only two runs were possible.