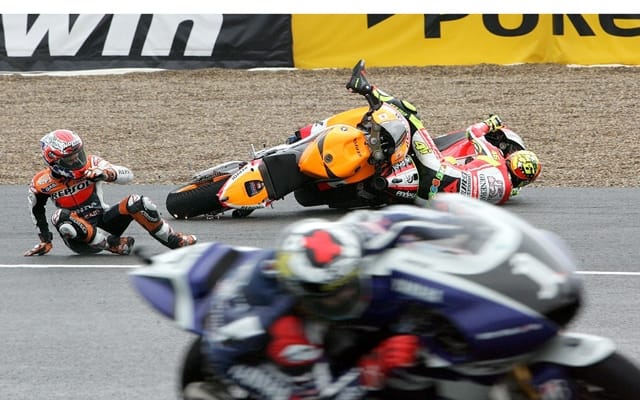 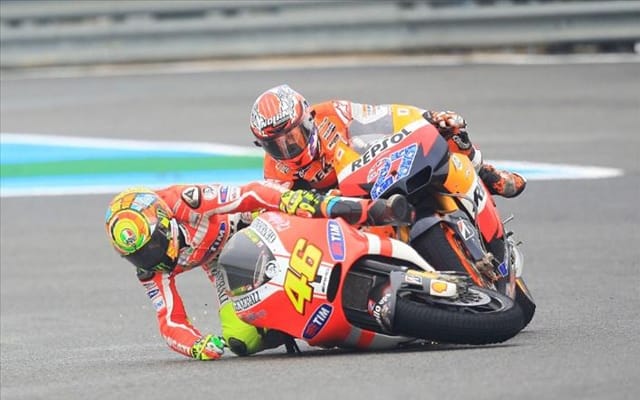 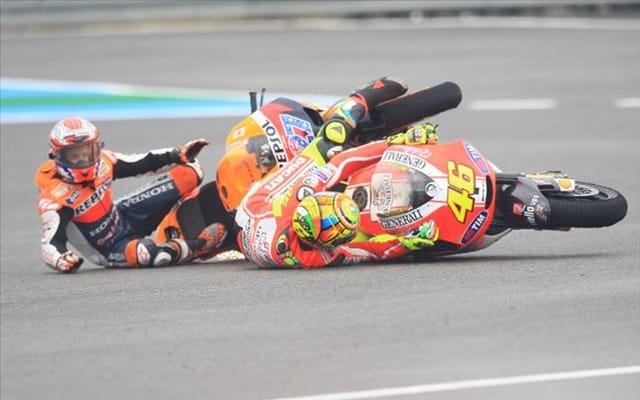 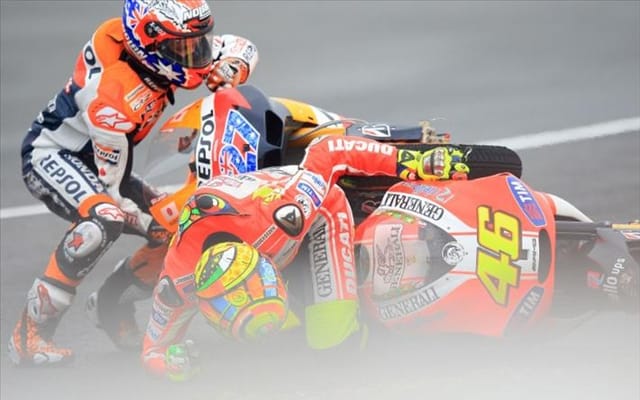 Defending MotoGP champion Jorge Lorenzo took his first victory of the season today at Jerez. Rain fell on the Spanish track throughout the day and the wet conditions took their toll, as the second contest of the season saw a number of riders crashing during a race decided primarily by attrition.

Pole sitter Casey Stoner held the lead early on but relinquished it on lap six to fellow Honda rider Marco Simoncelli. The Australian was then knocked out of the race 2 laps later, when a hard charging Valentino Rossi, who had moved all the way up from 12th, lost his front while attempting an aggressive pass in turn one, taking the Repsol Honda rider out in the process. Rossi was able to restart and eventually finish fifth, but Stoner retired in frustration (he later accused the track marshals of favouring Rossi in their attempts to get the riders back into the race). Lorenzo passed the fallen riders to take second and was later also gifted the lead, when the front running  Simoncelli, 2 seconds ahead and on his way to his first ever MotoGP win, highsided out on lap 12 (also on turn one). From there Lorenzo lead to the checkered flag.

Dani Pedrosa mounted an attack to come within striking distance of his fellow countryman but, as at Qatar, lost pace late in the race (presumably suffering the same left arm numbness caused by his collar bone injury) allowing Lorenzo’s team-mate Ben Spies to pass into second on lap 24 of 28. All hopes for a Yamaha one-two on the day were dashed one lap later though, when the American also tucked his front in a turn. Spies exit handed fellow Texan Colin Edwards the final spot on the podium until the Monster Yamaha Tech 3 rider suffered a technical failure and crashed on the last lap! Nicky Hayden then took up third spot, giving Ducati its first podium of the season.

Pramac Racing’s Randy de Puniet also crashed, posting his second DNF in as many races, and Karel Abraham and Cal Crutchlow fell as well, but were able to rejoin and finish seventh and eighth respectively. Andrea Dovizioso ran off the track but managed to finish twelfth after a pit stop.

The rate of attrition helped John Hopkins, riding the Rizla Suzuki machine in place of the injured Alvaro Bautista,  achieve a top ten finish in his first premiere class race in 3 years.

After the race Rossi immediately went to the Repsol Honda garage, TV cameras in tow, to apologize to Stoner for causing his ouster. Stoner reportedly responded, “Obviously ambition outweighed your talent.”

Dani Pedrosa will undergo surgery on Monday to cure the left arm numbness he has been suffering since breaking his collarbone in a crash at Motegi last year. His surgeon will remove the titanium hardware that was installed to knit Pedrosa’s collarbone back together, claiming it is pinching a nerve and causing the numbness. It’s not expected that Pedrosa will miss any races, as the next round, at Estoril, is on May 1, giving  the Spaniard sufficient time to recuperate.

After two races, Pedrosa sits nine points behind Lorenzo in the championship standings, while Stoner drops from first to third after today’s DNF. Nicky Hayden and Valentino Rossi round out the top five.