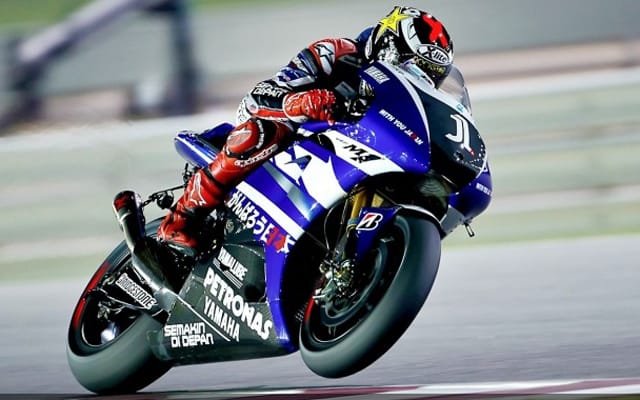 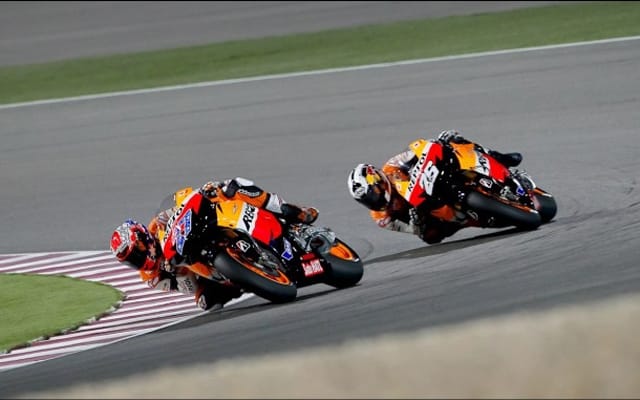 Repsol Honda rider Casey Stoner won the opening race of the 2011 season at the Losail circuit in Qatar today. Starting from the pole, the Australian settled into third position early on, after his team-mate Dani Pedrosa rocketed to the front with defending champion Jorge Lorenzo in tow. The three pulled away from the rest of the field, trading for the lead until lap 11 of 22 when Stoner rode past Pedrosa to open up a 1.239 second gap and never look back. Pedrosa, who had looked very impressive to that point, also let Lorenzo get by him a few laps later. Visibly disappointed with his third place finish after the race , the Spaniard told reporters that he was still suffering left arm problems from the broken collarbone he sustained at Motegi last year, and that he couldn’t control his bike or use the clutch properly during the latter part of the race. Indeed, though Pedrosa clearly had the more powerful machine, Lorenzo was able to pull over 3 seconds away from his fellow countryman, while Andrea Dovizioso suddenly moved up to within a second of taking the final podium spot from his Repsol Honda team-mate. Marco Simoncelli, riding another factory Honda, but under the San Carlo Honda Gresini banner, rounded out the top five — HRC’s domination of pre-season testing thus continued on into the race season.

The top Ducati rider was Valentino Rossi in seventh. The Italian briefly barged his way into second spot off the start line but then settled into a race-long battle with Ben Spies for sixth, which the American eventually won.

Alvaro Bautista, the only Suzuki rider on the 2011 MotoGP grid, missed the season opener after breaking his left femur in a crash during free practice on Friday night. Former Suzuki MotoGP rider John Hopkins, competing for Suzuki in British Superbike this year, will ride in place of Bautista during round two, at Jerez, Spain, April 1-3.