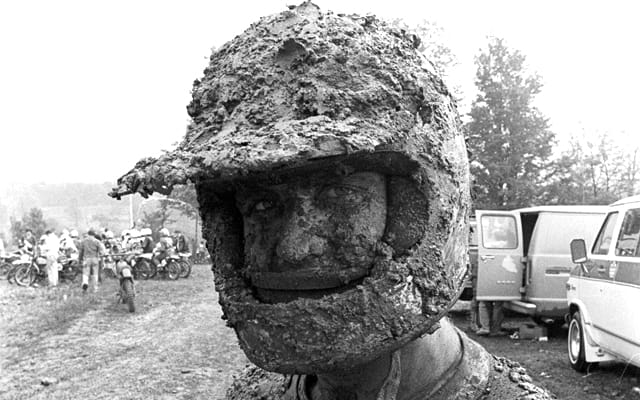 Off-roading, It’s What the Doctor Ordered

A study that claims off-road riding is good for you may help close the divide between those who love to ride motorcycles off-road and those who scowl at the sight and sound of a bike anywhere but on a road.

On one side of the gap are those who believe that off-road riding is a sedentary amusement for folks who don’t care about the environment. On the other side are enthusiasts who say terrain can be managed to address conservation concerns and argue that modern four-strokes are quieter than they’ve ever been and pollute less than a gas lawnmower.

Dr. Jamie Burr, who holds a PhD in kinesiology and health science, conducted the fitness study by taking a group of new riders on regular trail rides for several weeks and measuring changes in their health and fitness at the York Human Performance Lab.

“Off-road riding represents an attractive unconventional physical activity to help combat preventable disease and pre-mature mortality and the attendant burden to the health care system,” Burr writes. The researcher found that exertion levels while riding are similar to the effects of jogging, and he says the fitness benefits can be compared to mountain biking. “From a health-related perspective, we’ve now seen evidence that there’s the possibility to cause positive change,” he says.

Before enrolling in the study, Anthony D’Ambra was pretty fit, hitting the gym a few times a week and playing ice hockey year around. Then he lost 12 pounds by riding, mostly off his waist. “I didn’t know it could be that intense and taxing on your body,” the 21-year-old student said.

Riding, Burr says, is a lot like hitting the gym. “Balancing on an off-road vehicle is like sitting on a stability ball,” he says. “Controlling the handlebars — especially through the whoops — is like doing bench presses and seated rows or upright rows. Standing up and down would be like squats or deep knee bends. Standing on the pegs is like doing toe raises.”

As a result of the benefits from riding, he says, governments should do more to encourage off-roading as a way to improve the health of the population, especially in rural areas where there’s less likely to be a gym nearby, or an organized sport to join, but where there are abundant riding opportunities.

Off-roading groups are eager to use the research to help keep riding areas open, create new ones, gain government acceptance as a healthy pursuit worth supporting, and improve the image of off-roading.“It’s very hard for a non-rider, or even a street rider, to get their head around the fact that riding a gas-powered vehicle, and twisting the throttle, has any benefit to anybody, except for annoying your neighbours,” says Ken Hoeverman, executive director of the Ontario Federation of Trail Riders.

“We have to break that perception and show them that these are really rider-active vehicles,” says Robert Ramsay, president of the Canadian Off-Highway Vehicle Distributors Council (COHV), which represents the makers of off-road motorcycles and ATVs. “Those of us who ride know that they are a good workout, and it can be good for your body and soul.”

With the results, groups such as the COHV and the OFTR intend to push for off-roading to be accepted as a healthy activity and eligible for initiatives to promote health. There’s the federal Children’s Fitness Tax Credit, worth $75 per child for enrolling kids in healthy activities. To be eligible, the activities have to contribute to aerobic endurance as well as either muscle performance, flexibility, or balance, which the new study now claims for off-roading. But the current rules specifically exclude motorized activities, and the same rules apply to the Ontario tax credit worth $50. “Most provinces now have health-promotion ministries, and we need to make them aware of the health benefits of off-road riding,” Ramsay says.

The effort is worth more than a few dollars in tax breaks, or a few extra kilometres of trails. It’s about increased public acceptance. “There’s a stigma about what we do,” Hoeverman says.

While it may take a while for the policymakers to come around, the study can quickly help settle arguments with family members and friends who don’t ride. That trail bike your spouse is giving you a hard time about? It’s not a frivolous expenditure; it’s an investment in your health. That two-day trail ride you want to take? It’s not a weekend of thrills; it’s a down payment toward a longer life. And those chicken wings you washed down with a six-pack last night? Better go riding to work that off.

Before this research, there had been little inquiry into the links between riding and health. Riders often refer to a 1979 study conducted by the National Sport Health Institute in California, which compared the physical fitness of top professional athletes from different disciplines. It found motocross racers the second-fittest of the bunch, after soccer players.

Burr’s research is the first comprehensive fitness probe of recreational off-road riders. It began several years ago, with a tiny pilot study initiated by the Ontario Federation of Trail Riders, which wanted some ammunition to bring to debates about what was allowed on public trails. Promising results attracted support for further research from the COHV, as well as the Motorcyclists Confederation of Canada, the All-Terrain Quad Council of Canada, and the province of Nova Scotia.

Burr says the organizations took a hands-off approach with the studies to preserve the integrity of the science. The final results were vetted by an independent panel of academics and peer-reviewed before being published in January in the respected European Journal of Applied Physiology.

The first phase tested the physical demands of riding, and found it similar to jogging or calisthenics. The second phase tested the health and physical fitness of people who rode regularly, and found they were fitter than the average population. But that didn’t show whether riding helped make someone fitter, or whether people who were already fit were more likely to ride. So, for the final phase, Burr put non-riders on trail bikes for several weeks, and measured the changes in their health and fitness levels. While Burr calculated the results in precise scientific measurements, the participants saw the results in the mirror.

“I noticed more muscle tone and definition, and I felt stronger,” said Joan Beaty, 27, who was a kinesiology student at the time of the study and is now an athletic therapist. The tests showed she’d lost body fat, she says, but the results were also noticeable off the bike and outside the lab. “My batting improved,” the amateur softball player said. “I couldn’t hit past the base lines before.” After the study, she started hitting balls “right out into the outfield.”

Lauren Tannenbaum noticed muscles she hadn’t seen before, and felt fitter. But the biggest impact was to her mood. “I’d never been happier,” the 22-year-old student says. “I’m kind of a shy person, and it really helped me get out of my shell by doing something that I never thought I would do.”

“When I brushed my teeth,” said Sulan Ramdeen, “I could see my bicep pop.” The 23-year-old student was a regular jogger, running for 30 to 40 minutes four or five times a week, but “I felt more tired at the end of a ride” than after a run. Yohan Ko didn’t expect riding to produce any fitness results. “How could it, sitting down all the time?” the 24-year-old student said. He was a little overweight, and lost about seven pounds by riding. The biggest impact though, came afterward. “It made me like exercise more,” he said. “I would recommend riding to someone who doesn’t like physical activity, to motivate them.”

The study turned participants like Ko into off-road enthusiasts, and advocates hope it will be enough to change the minds of other skeptics. “It is an uphill challenge,” Ramsay acknowledges, “but it’s something we have to educate policymakers about.”