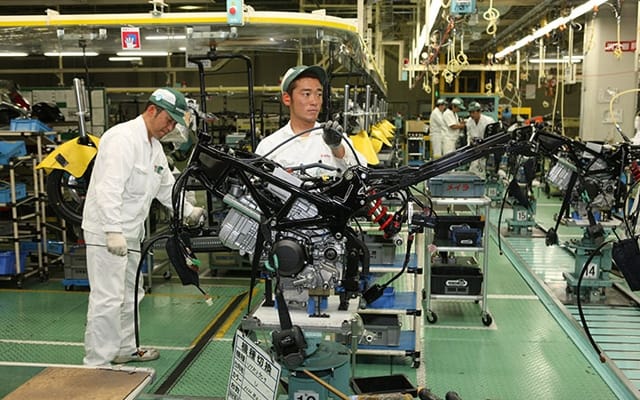 In light of the devastating earthquake and subsequent Tsunami in Japan last week, both Honda and Suzuki have announced that they’ve suspended motorcycle production at their plants. Honda reports it will halt production at all factories, including the Kumamoto and Hamamatsu plants where the manufacturer produces such bikes as the  CBR1000RR, VFR1200F and Goldwing. Honda said it plans to reopen the Kumamoto facility on March 20, but gave no indication on when Hamamatsu, the plant that is closer to where earthquake damage was worst, might return to production. Honda also stated that it has donated 300 million yen toward the recovery effort, as well as 1,000 generators and 5,000 gas canisters, and that it will co-operate with the rolling electricity blackouts that the Japanese government has created to lessen power consumption in response to the Fukushima nuclear power plant breakdown caused by the earthquake. Suzuki’s production has been suspended until March 17 at which time management will decide when to reopen.

As for the other two of the “Big Four” motorcycle manufacturers, Yamaha says its factories have sustained no damage and remain open, but that it will co-operate with the rolling blackouts and reassess the situation on Tuesday. Kawasaki has not made any announcement on whether the disaster has affected any of its plants.

Not surprisingly, the International Motorcycling Federation has confirmed that the Japanese GP, slated to be held next month at Motegi, will be postponed. A spokesperson told the Press Association that the race will be moved to a date later in the year.

The CBC website has published a list of organizations asking for your financial support to help people in Japan affected by the earthquake and tsunami :

Under the banner of the Humanitarian Coalition, four aid agencies — CARE Canada, Oxfam Canada, Oxfam-Québec and Save the Children Canada — have joined together to raise funds for Japan relief operations.

The Canadian Red Cross is also encouraging Canadians to support relief, evacuation and emergency response efforts with donations to its Japan Earthquake/Asia-Pacific Tsunami fund. Wireless users can text ASIA to 30333 to donate $5 to relief efforts.

Medical and logistics teams from Doctors Without Borders were racing to the worst-hit areas in Japan’s Iwate and Miyagi prefectures by helicopter, as roads are blocked by flooding. The organization relies mainly on donations to support field operations for medical assistance.

IDRF (International Development and Relief Foundation) is in the process of making plans to facilitate a response from our supporters to the immense devastation in Japan.