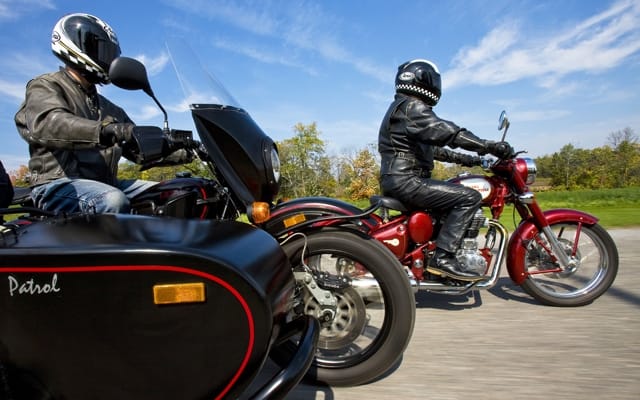 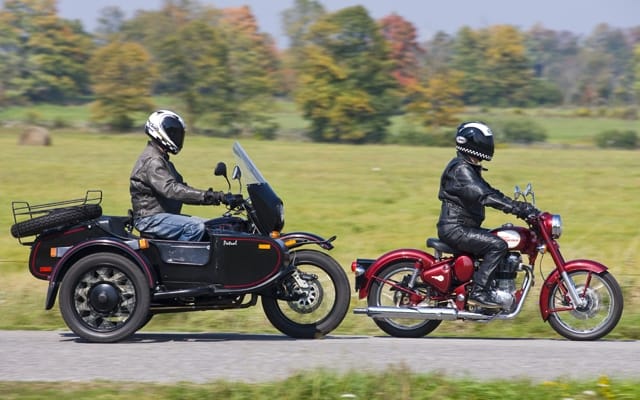 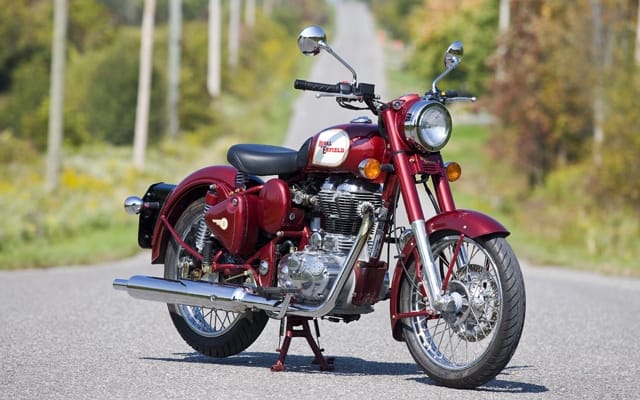 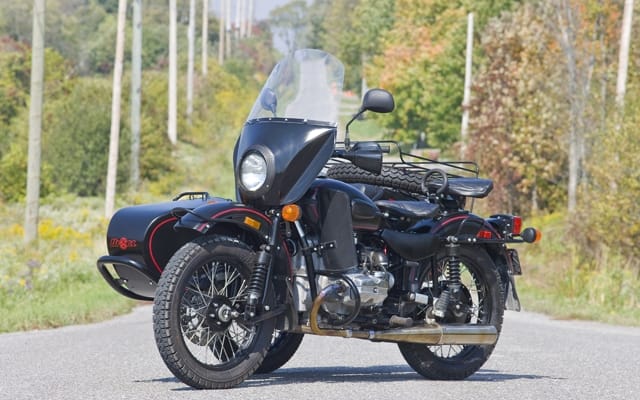 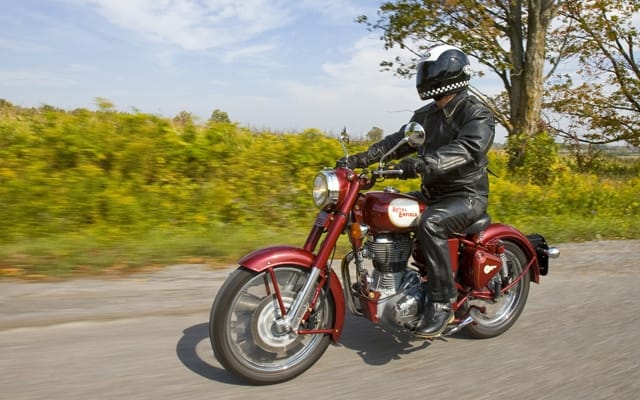 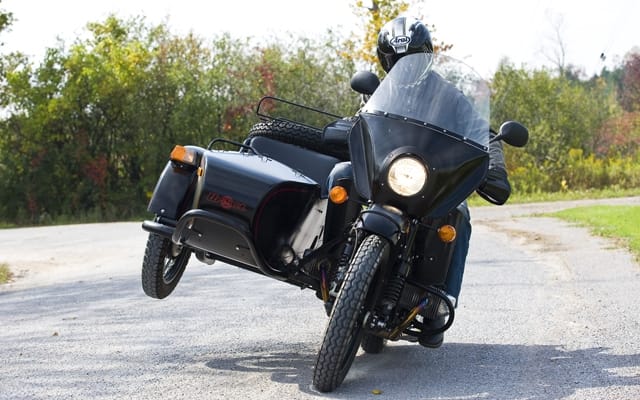 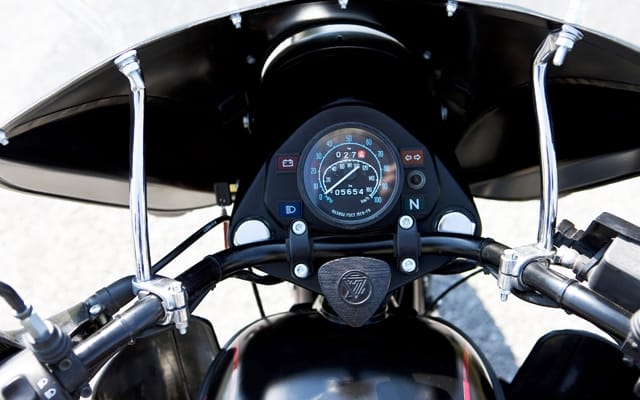 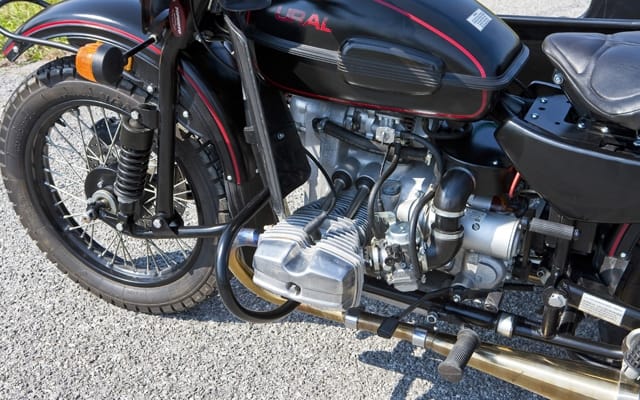 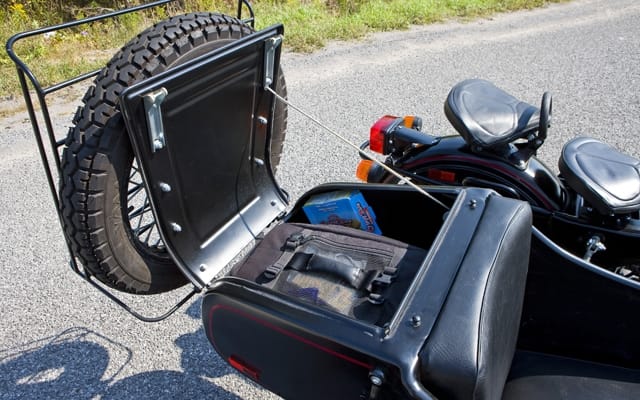 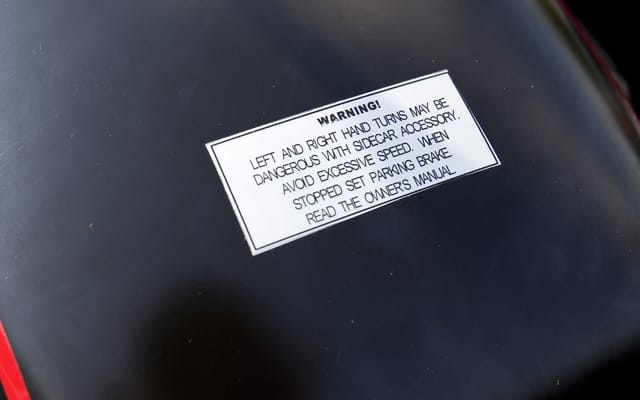 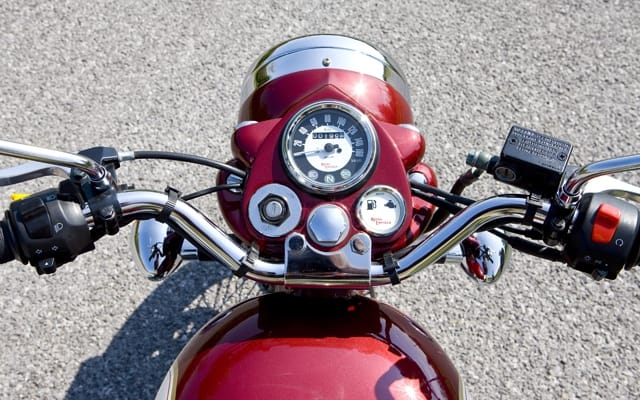 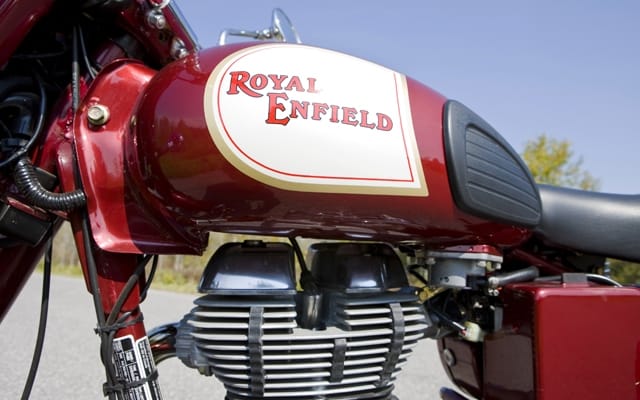 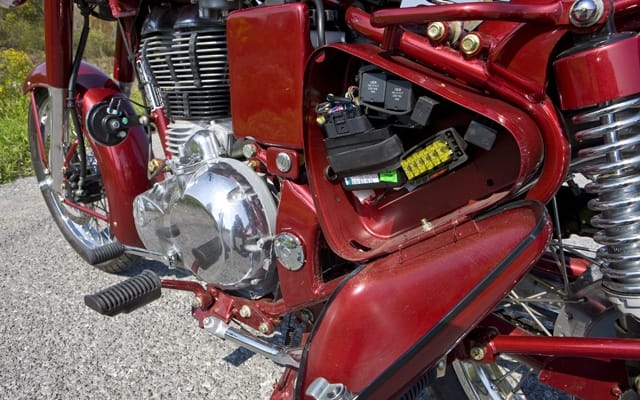 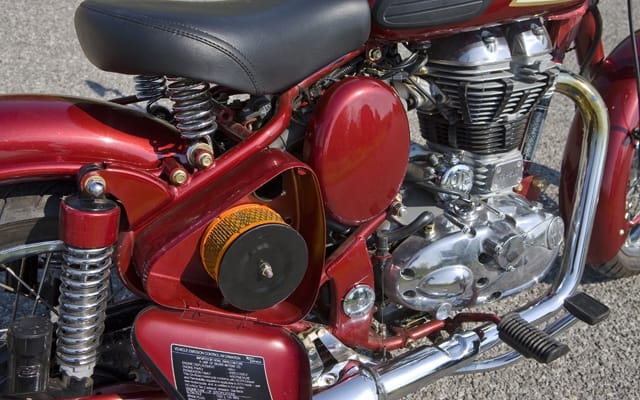 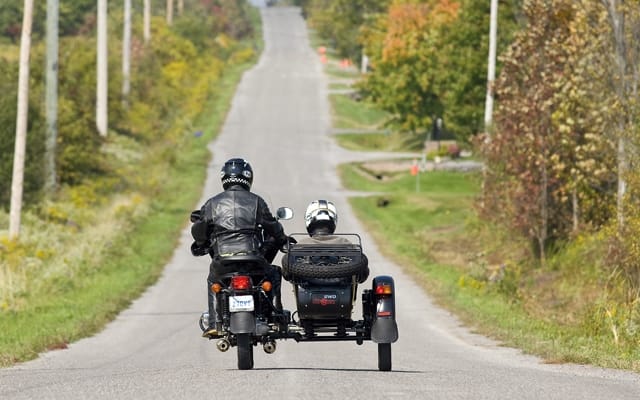 The new Triumph Bonneville and the new Moto Guzzi V7 are new motorcycles. The new Ural Patrol and the new Royal Enfield Bullet Classic are not new motorcycles. They are old motorcycles updated to make themselves palatable for the buying public, who do not want to wipe oil off their boots or set points or ram into the bus ahead because the brakes don’t work. The Bonneville and V7 ape classic motorcycles, but from the saddle they are neither vintage nor modern. They exist in between. No such ambiguity exists with the Ural and the Enfield. They’re not just old-fashioned, they’re old souls.

On a gorgeous fall day we convene at Peterborough Cycle Salvage, a motorcycle and snowmobile wrecker and the Canadian importer for Ural motorcycles. Everyone chuckles when they learn that the importer for a Russian motorcycle is also a salvage yard. And the guys at Peterborough Cycle Salvage get the joke, too. They can laugh at themselves — a rarity in the motorcycle business. They can also laugh at us. The last Cycle Canada test of a Ural rig ended when Neil Graham got one hopelessly stuck at the end of a long lane that became narrower and narrower and that ended in a swamp. After trying to gain traction by driving the rig while standing in the sidecar, he catapulted it into the reeds and buried it up to its axles. Then he gave up and dug out his cell phone and called the guys that loaned it to him. Soon after, they arrived. And before they helped him they laughed at him. They laughed at him for quite awhile. They weren’t laughing quite so much after digging the rig out of the swamp.

The Ural Patrol has five forward gears, one reverse gear, and is either one- or two-wheel drive. Much has been written about the peculiarities of driving a sidecar, and worrying types warn about the dangers of what can happen if a driver attempts to countersteer (ie: you think you’re going to go right but suddenly you go left). But it’s all hot air, all this worry, generated by people that have never tried one. And even though we have only limited sidecar experience (see swamp story, above) we hop on and after a quick spin around the parking lot tear off up the road looking for dirt roads. The only word of caution we would offer is to be very careful when the rig is engaged in two-wheel drive. It will not turn. In the parking lot we nearly hit the CC van, even after the guys from Peterborough Cycle Salvage warn that it “will not turn on pavement in two-wheel drive.” It’s not that we don’t believe them, it’s just that we are so astonished that it won’t veer from its chosen course at all that we only gasp when we should brake. Lesson learned.

The Ural is a copy of a BMW model from long before most of us were born. It has BMW’s flat twin configuration and old-fashioned displacement of 750 cc. It doesn’t take imagination to realize that dragging around the weight of a sidecar burdens the engine further. So it’s a slug. But that’s not bad. Where most motorcycles can cause you to lose your licence at less than half throttle, the Ural can be flogged, thrashed, and beaten and still not exceed the limit — 100 km/h on a Ural feels like 200 km/h on most anything else. While the Ural makes a fine machine for pottering paved backroads, it is when the pavement ends that the fun begins. And the more ruts and loose gravel and mud the better. It helps if you bring a friend: with three wheels, the Ural tries to tilt away from the direction of the turn, but a little ballast in the sidecar allows right-handers to be taken at higher speed. And, unlike a regular motorcycle where the driver has to turn around to meet the eyes of his passenger, with a friend to your right you can intimately share the experience of having the shit scared out of you.

For the great joy of the Ural is to go fast enough on a bad enough surface to cause the suspension to oscillate excitedly and the machine to buck like a steer off to slaughter. With your hands clamped onto the horns, you’re just along for the ride and aiming away from the ditches. And cops aren’t ever on dirt backroads (unless there’s been a murder on one, but then they’ll be otherwise engaged) so you can do whatever you want. It’s right at this ragged edge of control where hilarity resides. Loose gravel sends the front end wandering while potholes send the tail end hopping. Unlike a motorcycle with its wheels in line, where you can weave around obstacles, a two-track sidecar rig makes finesse impossible. Don’t even try. Just go.

While we knew what to expect from the Ural, the Enfield was an unknown. We’ve been procrastinating about requesting one to test beause we’re not big fans of old-school single-cylinder engines. The primary purpose of big singles is to generate vibration and not power. We know they’re pure and a direct link to the beginning of motorcycling, and we know that old guys wet themselves over Gold Stars and Manxs, but we think they’re better powering log splitters. So imagine our surprise when we realize we’re wrong.

After only a few kilometres we realize that the Royal Enfield is a really nice old new motorcycle. (Disclaimer: having just hopped off a Ural, our opinions cannot be trusted. For this prose to be of any use for a prospective purchase, it is necessary to use the Ural as a benchmark and then to extrapolate our findings accordingly.) The Enfield is a really sophisticated immediately-post-World-War-II motorcycle. It fires right up and settles down into a calm idle. The clutch pull is as light as a Honda’s and it snicks neatly into gear. We join traffic and accelerate smartly up to speed. And get ready for this: the front brake works, it really does, and it has good feedback. We should have tested this motorcycle a long time ago.

With skinny tires and sticky rubber, the Enfield’s handling is more bicycle than motorcycle, and it’s possible to weave and dip and thread through the city with joyous precision. The Enfield’s success as a motorcycle is its attention to detail, both in the upgrading of components (gearbox, clutch, brakes) and the attention given its finish — when you’re riding it, or standing next to it, it looks like a vintage motorcycle miraculously preserved and subtly improved. The vibration that we so feared at the onset is a non-issue — at least up to 100 km/h or so. Beyond that speed — and this goes for the Ural, too — the vibration spikes and fun plummets.

At $7,395 the Enfield is a budget motorcycle that doesn’t feel like a cheap bike, and at $13,795 the Ural Patrol is priced thousands less than competing three-wheelers, both standard bike-and-sidecar packages and other, less traditional machines like the BRP Spyder. And unlike retro bikes, when you ride these two you have a direct link with the past. The Ural has a Russianness to it, a peasant-girl-facing-a-tough- winter-ahead stolidity. It is not a frivolous machine, nor is it demanding: its low-compression engine is a throwback to a time of austerity, and will likely run just fine on kerosene, cooking fat, boiled chickens, castor oil or whatever else you might be tempted to pour into the fuel tank. And the carrying capacity of the sidecar is ideal for stocking the larder with pea soup, sardines, fuel oil and ammunition. Just because things are good now doesn’t mean that it’s going to stay that way, and it’s embedded deep in the Russian psyche to expect the worst to cycle around again. It’s a dark — though useful — view.

Even though it’s been manufactured in India for many years, the Enfield, like the Ural, reflects its home. You can easily imagine, even today, winding along the hedgerows in the Lake District, reciting Wordsworth while keeping your lips sealed to minimize the ingress of insects (because, of course, you’re wearing a leather-lined pudding-bowl helmet and your eyes are peering through goggles).

As a prospective purchaser, it’s necessary to think of your application of these machines carefully before visiting your banker. The Enfield is an excellent city bike and an ever better back road bike. Where it’s less at home is in the transition between the two. Too much time on the highway, unless you’re content to stick in the right hand lane and bear the wrath of modernity’s impatience, makes for little fun. Same with the Ural. If you live 40 kilometres back of nowhere (and especially if you dread the downside of peak oil) then the Ural may be the motorcycle for you. Take your pick: Ural or Enfield — it’s a richer experience to travel down the road on a true veteran than it is to play with machines that only feign old age.