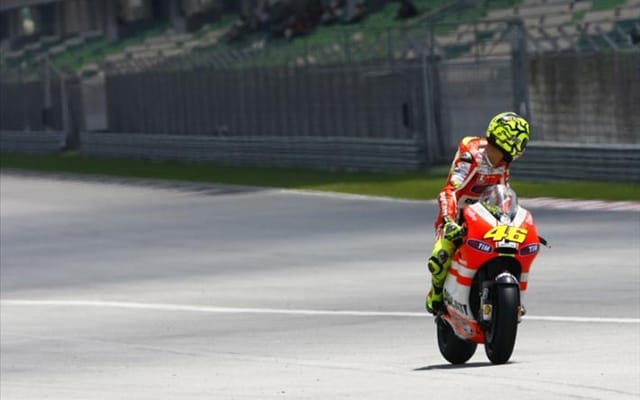 Casey Stoner was the fastest rider at the Sepang II test for the third day in a row, as Honda continued its domination of pre-season testing, taking the top four spots on the time sheets during the final day at Sepang. Dani Pedrosa joined Stoner in achieving a sub two minute lap (they being the only riders to do so), but was 0.138 sec. adrift of his Repsol Honda team-mate. Third fastest was San Carlo Honda Gresni rider Marco Simoncelli who ran 0.378 seconds quicker than Andrea Dovizioso. Yamaha’s Ben Spies rounded out the top five, just over a second slower than Stoner.

For the second day in a row Aspar’s Hector Barbera put in the best performance on a Ducati; he placed  tenth. Behind him were factory Ducati riders Valentino Rossi and Nicky Hayden, both 1.804 seconds slower than Stoner. Rossi, who missed yesterday due to a fever,  was not able to hide his disappointment about today’s result. He admitted that though his team had done much work on the bike, “we didn’t fix our problem.”

“We are not fast enough in the corners. We have a problem for turning the bike, so I always have to slow down too much to make the good line. I cannot ride the Desmosedici in the right way,” said Rossi.

“The position is bad, because we are just eleventh, but especially the distance from first. We are quite worried. We have to try to work to improve our performance.”

“Missing one day was a disadvantage, but it is not just that. I mean we can make the bike a little better, but anyway the distance from the Hondas is big.”

The third and final 2011 pre-season MotoGP test will be held at Qatar from March 13-14.