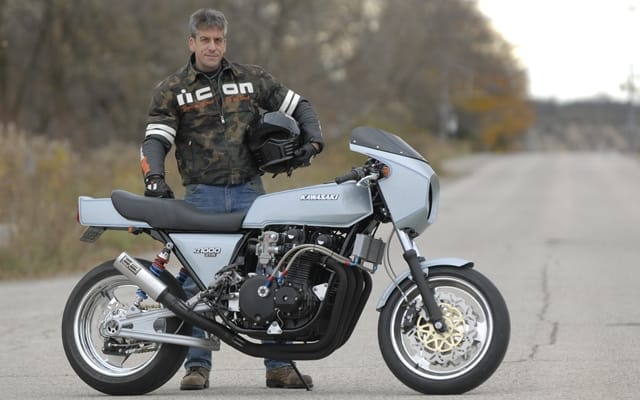 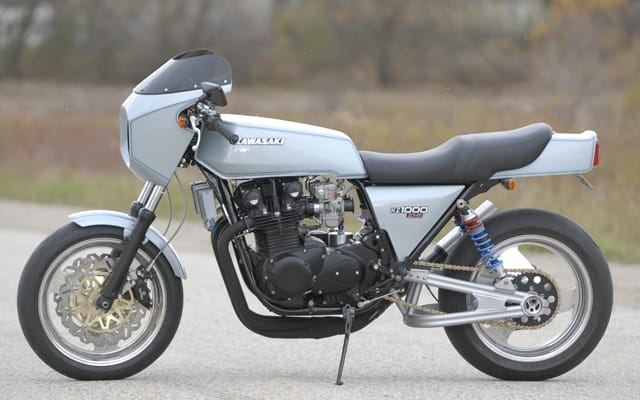 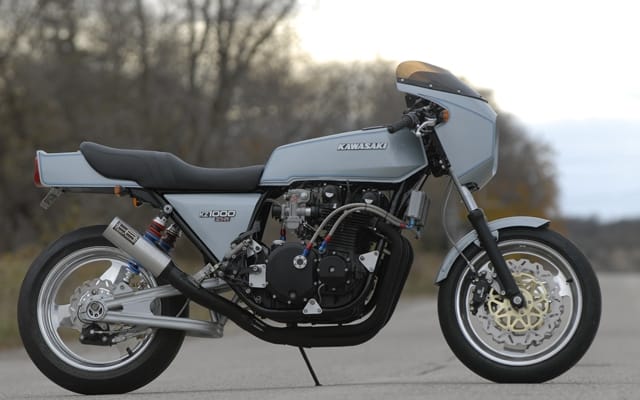 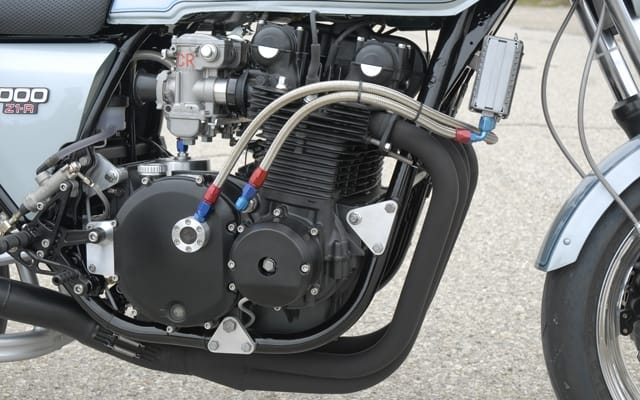 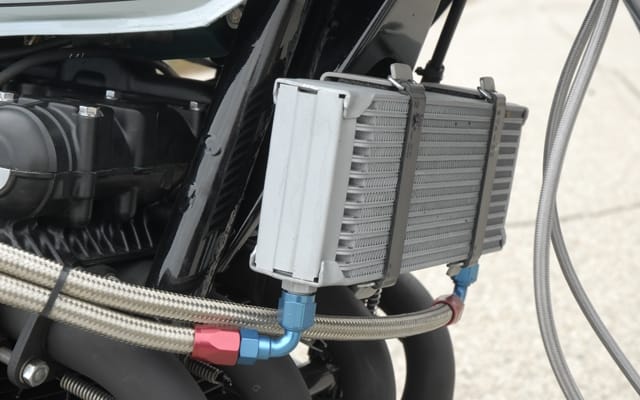 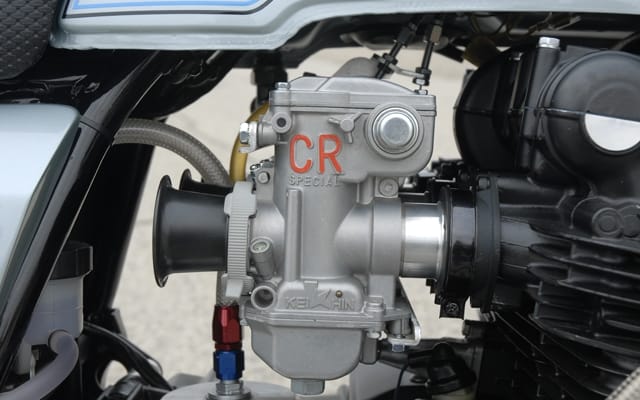 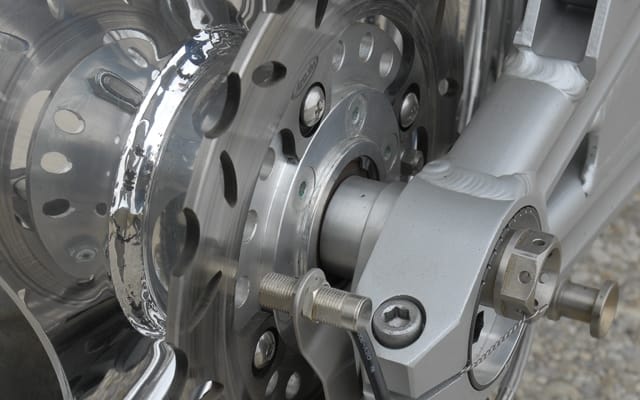 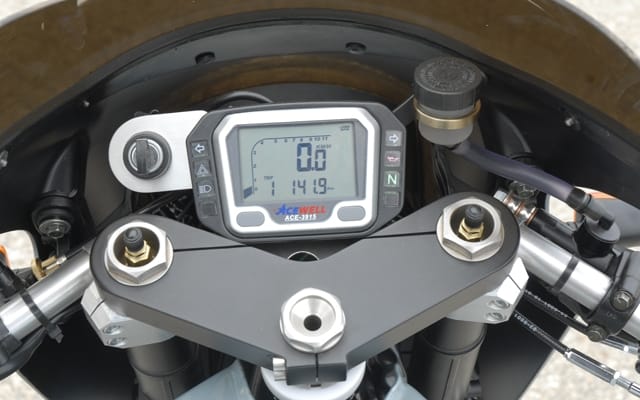 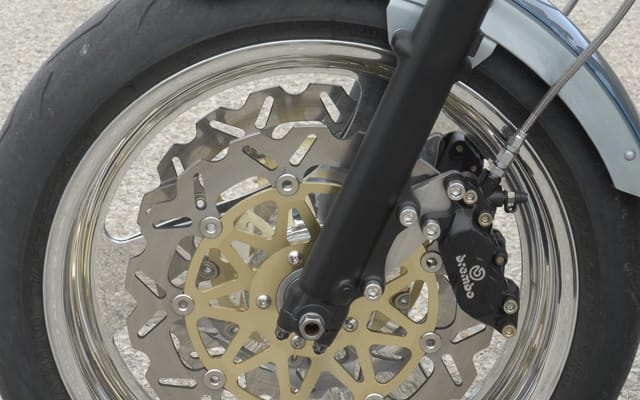 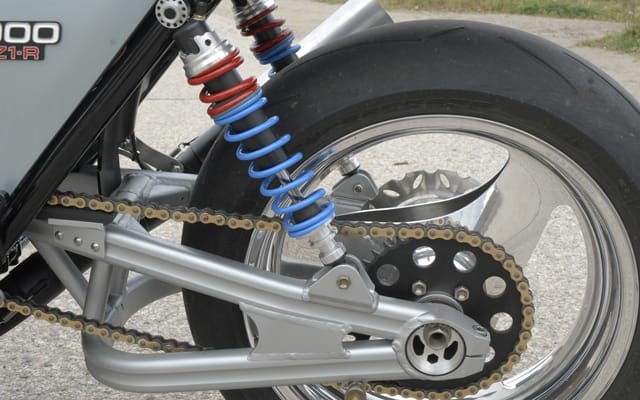 When it comes to fitting bigger rubber and better suspension to a ’70s superbike, few sweat the details like the builder of this machine.

When Richard Biggs was an 18-year-old high school student, his guidance counsellor told him to pick a trade. Luckily, he chose machining.

Now 43, Biggs has developed skills with metals, mills and lathes that have helped him create and fit many custom parts to his favourite motorcycles—air-cooled four-cylinder bikes from the early 1970s through the mid 1980s. He enjoys tinkering with the older 1,000 cc superbikes, and anything Biggs wanted to add he has made from scratch, or cannibalized from another bike and machined to fit.

Such is the case with his customized 1978 Kawasaki Z1R. He rescued the bike from a garden shed, and paid $400 for the basket case. Without changing the overall flavour of the original motorcycle Biggs simply wanted to beef up the Kawasaki with a better fork, swingarm, wheels and brakes.

As found, the Z1R had been dismantled in the early 1980s and the engine was out of the frame with the top end apart. That square coffin-style tank was off the frame, and many of the parts were dusty and rusty.

Biggs was soon at work in his Guelph machine shop — the sunroom attached to the family home. He’s got equipment that includes a full-size lathe, a mill, and TIG welding gear. Starting with the bare frame, Biggs laid the Fox rear shocks down by relocating the top mounting points. He then narrowed a Kawasaki ZRX1200 swingarm by cutting out almost four cm at the centre and welding the unit back up so it would fit between the stock Z1R pivot points. Additional bracing was added below the swingarm shock mounts, and Biggs reinforced the Z1R’s frame at the headstock and swingarm pivot points.

Biggs turned to eBay and found a set of new old-stock Performance Machine 17-inch wheels originally intended to fit a Buell. To run the rear rim Biggs had to machine up mounts to accept a left side sprocket and a right side rotor — the very opposite of how the wheel fits the Buell, where the drive is on the right.

A fork from a 1982 Kawasaki GPz1100 was located, and Biggs machined a new spindle to fit the lower triple clamp. He lengthened the stock tubes by making 11 cm long hollow slugs to thread into the top of each one. If Biggs hadn’t extended the fork tubes the Kawasaki would have an awkward ride height,resulting from the fitment of the smaller-diameter-than-stock wheels. He did lower the front fairing by 15 cm, and cut a good portion of the windscreen away. Tucked in behind the shield is an Acewell digital speedo and tachometer unit.

With some 18,000 km on the clock the engine had originally been taken apart to  correct a head problem, and the owner had intended to install a big bore kit while the head was off. However, he lost interest in the project, and so the engine was untouched until rescued by Biggs. He said the unit was in “amazingly good shape,” but Biggs still took the time to straighten and weld the crank and lightly port the head. Although it certainly didn’t need one, Biggs plumbed in an Earl’s oil cooler and added a little window so he could see oil flowing through the output line.

Fuel and air mix in a set of new 31 mm Keihin CR carbs breathing through open velocity stacks. For exhaust, Biggs stumbled across a set of old Hindle headers and muffler at Zdeno Cycle in Kitchener, his local bike wrecker and accessory shop.

Further changing the lines of the Z1R, Biggs did away with the stock seat skirt, lowered the saddle, and pulled the taillight deep into the rear housing. In finishing the Kawasaki not a single piece was powder coated; everything was stripped and painted, including the frame and brackets. The rear cowl, fuel tank and fairing were painted the stock silver blue colour by Zack Hoffman at Bodyworks in Guelph.

It took Biggs seven months start to finish, and he’s since put about 2,000 km on the Kawasaki. “When the Z1R came out in 1978 it was pretty oddball,” Biggs said. “It was kind of an ugly duckling.” An ugly duckling no more; Biggs used his machinist skills to transform the Z1R into something of a swan — and he’s happiest keeping the bike on the boil when out on a Sunday breakfast ride.