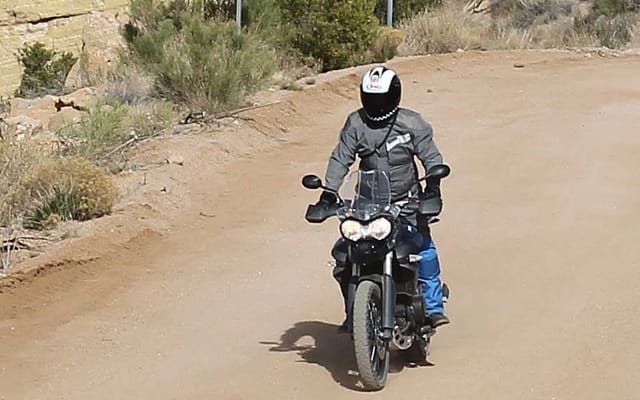 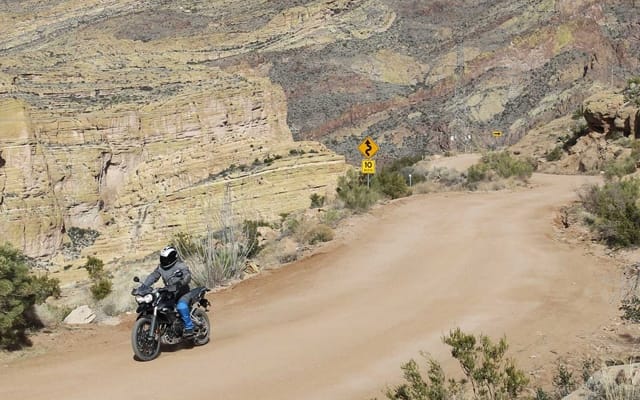 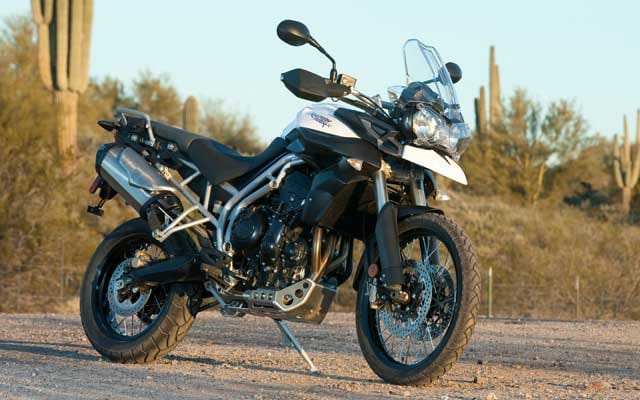 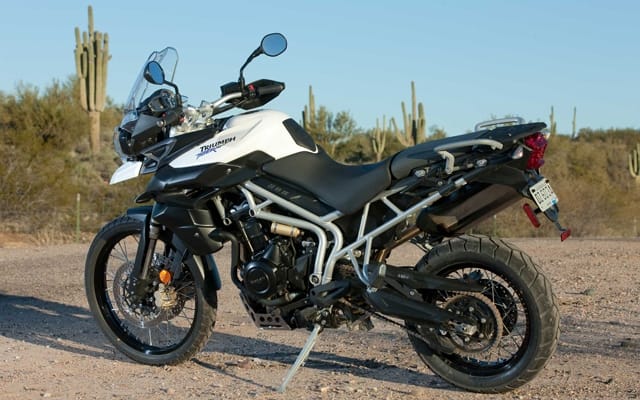 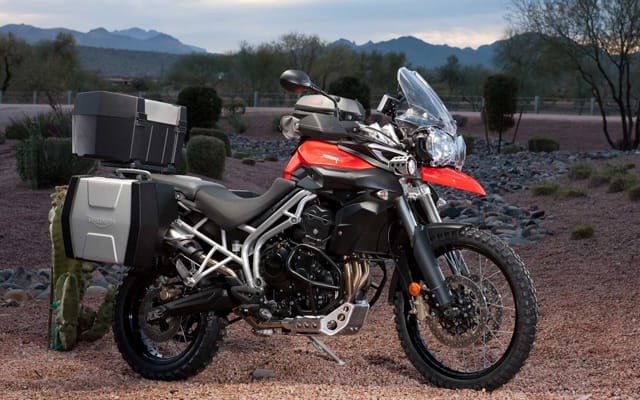 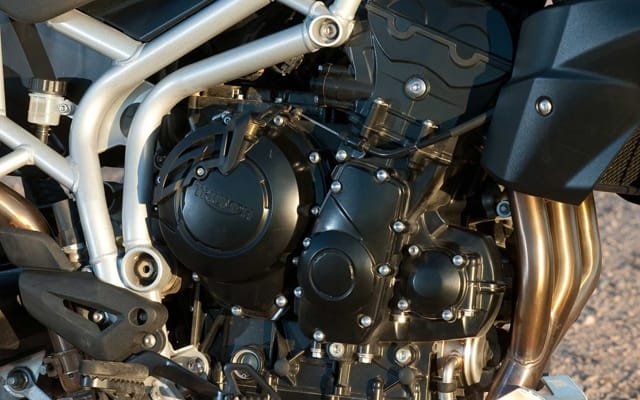 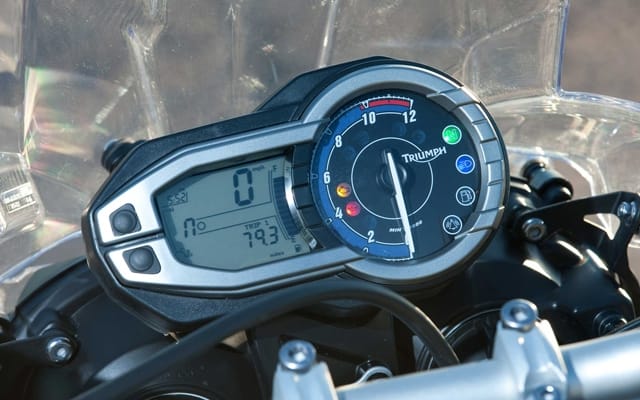 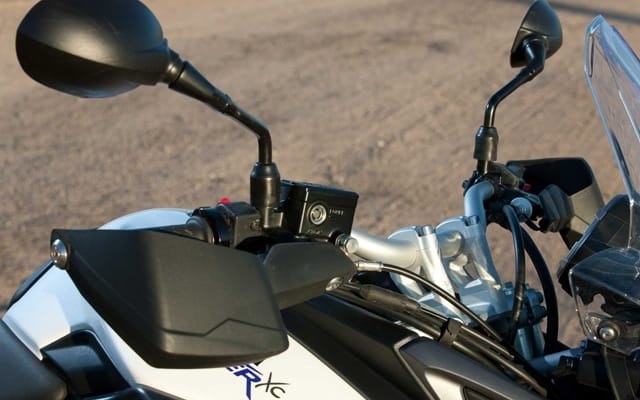 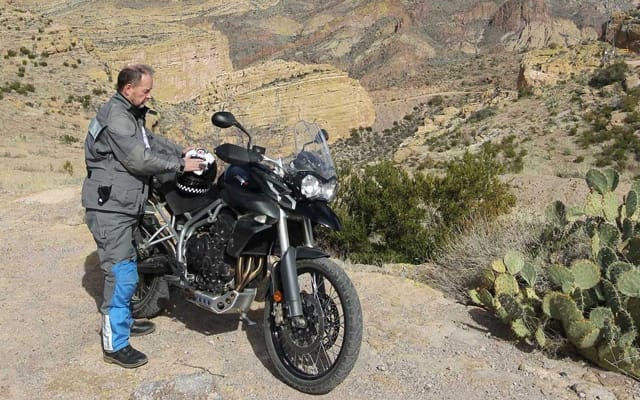 Steve Thornton finds Triumph’s newest Tiger incredibly forgiving of his limited off-road riding ability, until he tries to park that is.

On the long dirt road on the back side of the Superstition Mountains, Triumph’s new dual-purpose Tiger was composed, capable, and comfortable, unlike its rider. I don’t understand riding on dirt; while I get the theory — those spinning wheels are stability inducing gyroscopes, and must be kept spinning — I don’t feel it on a physical level. Still, the Triumph that I rode only fell over once, and it wasn’t moving, or even running, when it did. That says more about the new Tiger 800XC than a truckload of brochures would.

The XC is the more expensive of two new Tiger 800s, the other being intended primarily for road use. But for the $1,400 premium you get a 21-inch front tire on a spoked, aluminum rim (the standard Tiger wears 19-inch rubber up front), a 45 mm fork with more travel, rebound damping adjustment on the rear shock, handguards, and a higher handlebar.

It comes together in a package that feels light and nimble, and it handled in a predictable manner when the road surface was loose and, at times, nearly impossible to see. Approaching the Radisson Resort near Scottsdale, Arizona, I plunged into an eerie, backlit glow with the sun in my eyes and a dust cloud obscuring every detail of the landscape, riding on hope and whatever luck I had left, and the Tiger absorbed the ground under its wheels without any missteps.

The 799 cc triple that powers the Tiger XC and the standard Tiger is a delight. Claimed to make 94 hp and 58 lb-ft of torque in a very flat curve, the engine delivered good power throughout the rev range. In high gear and at low engine speeds, it produced sufficient thrust for a highway pass. In fifth gear the Triumph powered past 160 km/h and gave no indication of running out of steam. I could feel vibration through the seat, pegs, and bars, but it was not objectionable even at higher engine speeds.

Washboard ruts in the dirt road forced me to take a standing position, and the throttle was a bit choppy in that circumstance, though it may have been a result of my clumsiness. I also noticed a bit of off-idle abruptness even when I was seated, but it was slight and never caused any problems. Twice, the engine did stall, however, when I closed the throttle suddenly after a bit of high-rpm running — once, in the dirt, and with earplugs muffling the motor’s raspy exhaust growl, the engine quit while the clutch was disengaged; when I released the clutch lever after a downshift, the rear wheel locked up and slid. I was a bit slow to realize what was happening, but I never felt that the bike was in danger of falling.

On the highway, the Tiger’s minimalist windscreen effectively moved air around me, letting the windblast hit my shoulders and upper chest. The handguards kept my fingers from suffering in low temperatures on the highway, too. I felt no buffeting even at speeds over 100 km/h.

I’m five-nine, and the footpegs caused my legs to bend a little short of 90 degrees, so a taller rider might complain after some time on the road, but I felt no discomfort even after several hours on dirt and highways. The seat, which is flat and relatively confining in the fore-and-aft direction, began to feel hard at the end of the ride, but was not noticeably uncomfortable; it would likely produce more complaints after a long day on paved roads, however. The seat on both Tigers is two position adjustable (865/845 mm on the XC, 810/830 mm on the standard model) and was placed in the lower position, allowing me to reach the ground without stretching uncomfortably; taller riders were able to place their feet flat on the ground.

The ride behind the Superstition Mountains followed an hour’s running time on pavement, and the XC, which was fitted with Bridgestone Battlewing dual-purpose tires, was smooth and stable at speeds from 50 km/h to well over 160 km/h. (Metzeler Karoo tires are recommended for serious off-road work.) Braking power was good. The models we rode were not equipped with ABS, but both Tigers will have ABS options available this spring, and the rider will be able to turn it off for riding in the dirt.

Triumph set out to make a dual-purpose Tiger that feels narrow and light, and those qualities were evident throughout the ride. The bike feels tall, light, and quick, and though we did not take the Tigers into seriously rough country, it gave no suggestion in its handling or power characteristics that would give me reason to fear using the Tiger in a harsher environment. I certainly would fear doing that – but only because of my own lack of off-road expertise; the Tiger 800XC felt fully ready to explore more serious dirt.

With a set of hard bags and optional windscreen adjustment hardware, both the Tiger XC and the standard model should prove to be adequate long-distance mounts. The seating position, with hands a bit lower than the shoulders and spread apart, legs just slightly bent, and back angled very slightly forward, felt comfortable for several hours and is nearly ideal. At times late in the day, when braking to a stop, I felt pressure on the palms of the hands that might have become uncomfortable if it were to last, but it never did. My wrists and hands remained  comfortable throughout the day.

The Tiger 800 is set to compete against bikes like BMW’s GS series and appears to be capable of winning the hearts of riders who want a bike with dual-purpose looks and abilities. A full-on test will be required to unveil any problems, but on a one-day ride on pavement and dirt, aside from an occasional engine shut-down under closed throttle and poor resistance against a clumsy rider’s tendency to let it fall over while parking, Triumph’s new middleweight adventure tourer showed no weaknesses.