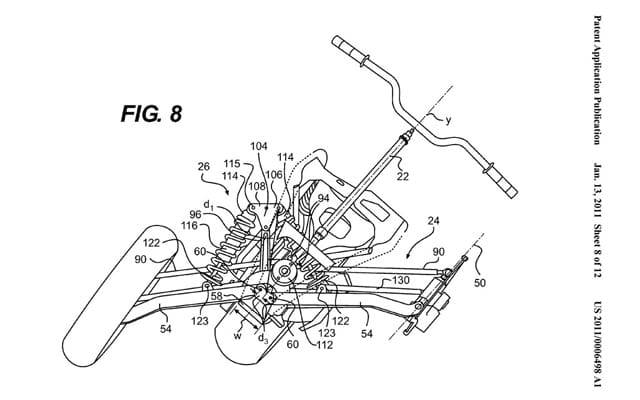 When I rode a Spyder for the first time through the hills of Austria last year, a constant refrain from Can-Am staff, in response to my motorcycle biased riding style, was, “On a Spyder you don’t lean!” That may soon no longer be true. A recent U.S. patent application shows that Canadian firm BRP is working on a leaning version of their uncategorizable three-wheeled roadster. A diagram accompanying the application clearly shows a Can-Am’s distinctive Y-architecture (two wheels in front, one in back) trike design, yet here with a parallelogramming front end similar to that of Piaggio’s MP3. While there is no guarantee that this leaning Spyder will make it from the drawing board to BRP’s production line, keep in mind that the original Spyder was first glimpsed on the cover of Cycle Canada, after then editor Bruce Reeve had an illustrator use patent application plans to create what turned out to be a dead-on rendering of the unorthodox machine before it was officially released.