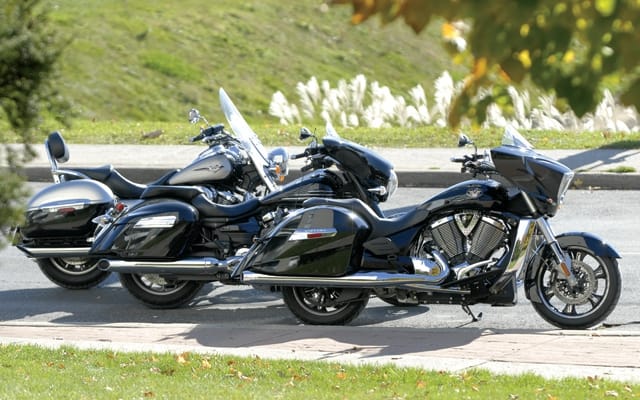 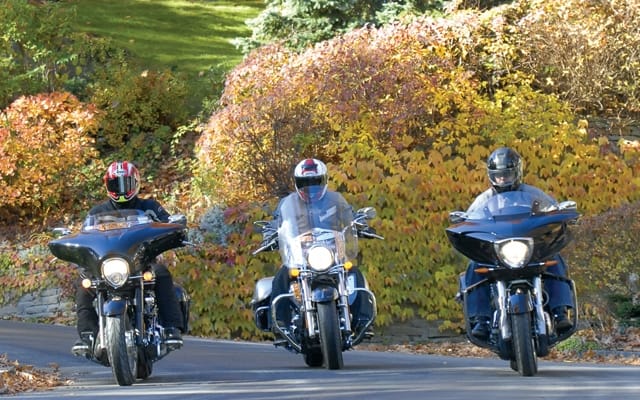 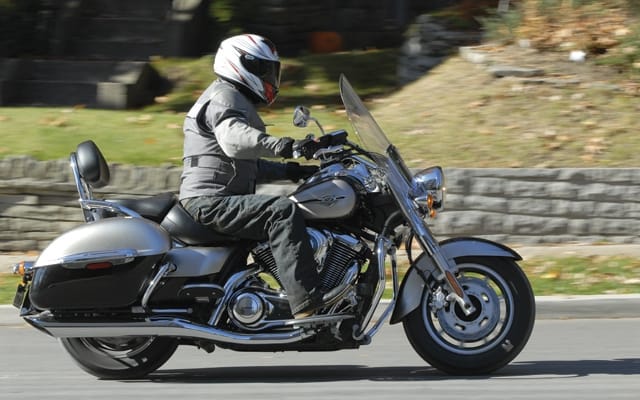 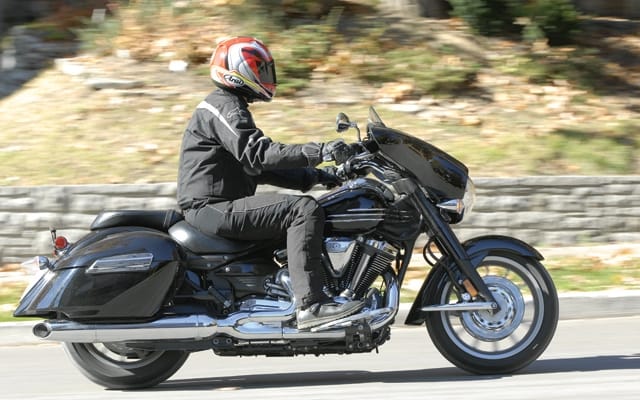 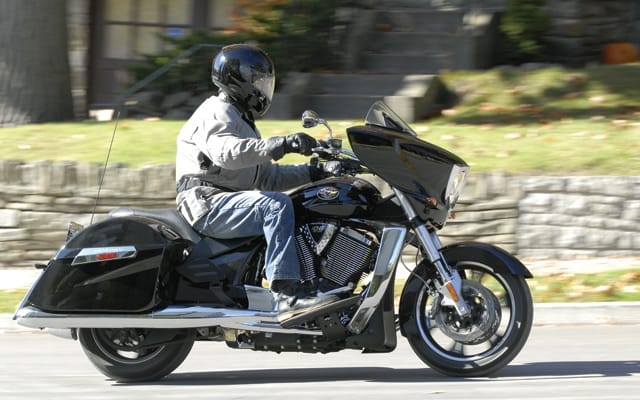 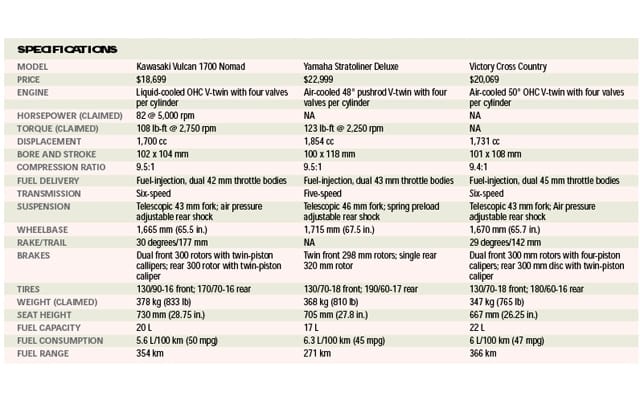 It’s more fun to compare a roto-tiller to a road racer than it is to compare two or more motorcycles that—outwardly, at least—seem so much alike. Can this trio of heavyweight cruisers that share narrow-angle V-twins and hard saddlebags and something up front to deflect the oncoming wind blast really be motorcycles possessed of distinctly their own personality? Or is it like comparing Bud Lite to Coors Lite to Miller Lite—different in name only?

The manufacturers of these motorcycles would surely jump up and state that the sculpted fuel tank  or finely wrought fender shape of their model would place it at the head of its class. But asking a manufacturer about its own machine is like asking a neighbour if their kids have flaws. The rest of us, without familial connections, can see more clearly. And what we saw in front of us when we began this comparison were three motorcycles that tapped deeply into the  American motorcycle pantheon. We were tempted to write “Harley-Davidson” in place of “American motorcycle,” but Neil Graham, when he first threw a leg over the Kawasaki, let out a grin and said that the riding position reminded him of the 1947 Indian Chief that he once owned with his father. And, indeed, the forward positioning of the Kawasaki’s seat replicated the privates-on-the-petrol-tank arrangement that was the norm on post WWII H-D Panheads and Indians. It is a riding position that has fallen out of favour in recent years, as motorcycle seats have migrated down the bike’s spine toward therear wheel and closer to the ground, to answer the public’s demand for increasingly lower seat heights.

The Kawasaki’s forward perch, unsurprisingly, gave it the highest seat height and a cockpit that, at first, seemed slightly claustrophobic for taller riders. There is a contradiction here, as the intimacy of the seat to the handlebar, the windscreen, and the footboards and foot controls made it better suited to smaller riders. But smaller riders have shorter legs. And the seat is the highest of the trio. Hmmm. An unqualified triumph of being shoved forward, however, is how surprisingly effective the windscreen becomes. Old-school cop-bike windscreens are no more sophisticated in their management of airflow than a sheet of plywood bolted to the fork of a motorcycle, but by being so close the usual trio of problems (buffeting, buffeting, buffeting) are largely eliminated, even at 120 km/h.

Yamaha’s Stratoliner and Victory’s Cross Country are decidedly more modern interpretations of the touring cruiser. If the word “modern” can be used in this context. If the Kawasaki’s old school windscreen is generically mid-last-century American, no such ambiguity exists in the handlebar fairing for the Victory and the Yamaha: it’s classic Harley-Davidson, through and through. And more than just the look of the Harley’s fairing has been adopted by Victory. Reaching highways speeds for the first time, all of our test riders shared a similar experience: wind turbulence to the helmet at the speed limit, and especially above it, was severe. We have experienced this on Harley’s version of the bat-wing fairing with the truncated windscreen, too—both the H-D and the Victory wear screens too short to effectively do their job. And it is a problem that doesn’t seem to be affected by rider height, as our testers ranged in height from 5’9” to an even six feet. Despite the similarity of its fairing design, the Yamaha did not buffet to nearly the same degree as the Victory.

Sharing a comparable riding position—low seats, wide bars, forward footboards—the Yamaha and the Victory have sprawling cockpits that our shortest tester found a little too spacious. The Yamaha, especially, didn’t allow him to put his feet squarely on their surface, and the handlebar grips were as far apart as the ends of a steer’s horns. The Victory’s long tapered footboards were a more accommodating design, allowing multiple foot positions, and the handlebar bend met the rider more congenially.

Neil Graham nearly blacked out at a Victory press launch when the presenter tried to power-point him to death with exhaustively-researched pie charts and graphs proving that the hard saddlebag and windshield-equipped cruiser would be the salvation of humanity. (He might have mentioned that the segment is growing, but Graham’s memory of the event is weak.)The popularity is easy to understand. Loving couples need space to store the fudge and potpourri from weekend cruises, and backpacks and throw-over bags are not in line with the luxury to which they have become accustomed. After using the panniers on the three machines, we collectively decided that all saddlebags should be hinged from the top, and not from the side, as is the norm on most sport touring motorcycles.We never pinched a finger and our contents never fell out—something that we can’t claim from the bags on the motorcycles that we rode on our most recent Fall Tour.

If one were to form impressions solely by reading the specification sheet (we know you’re far too sophisticated for that), it would appear, in the sporty-ness rankings, that the liquid-cooled OHC Kawasaki is the most athletic of the three, followed by the OHC air-cooled Victory and then trailed, at some distance, by the air-cooled pushrod mill of the Yamaha. But you’d be wrong. To get a truer picture, flip that list upside down. The Yamaha’s pushrods are illustrative of the mechanical commitment to the machine’s retro looks, but the massive (1,854 cc) displacement and four valve heads give it the most eager and willing temperament—the Stratoliner was the terror of on-ramps regardless of who was at the controls.

Though it didn’t quite have the Yamaha’s exuberance, the Victory is a motorcycle that exudes refinement. And we’re not talking about the kind of over-engineered blandness that can sap motorcycles of any desirably visceral quality. No, the Victory is like a two wheeled V-twin Mercedes. In other words, it’s like a V-twin Gold Wing. The controls are light (for a gigantic machine, at least) and it’s a bike that you’d like to ride far and fast—if it wasn’t for that fairing induced helmet buffeting, of course. How odd it was, then, that the Kawasaki was the most sedate of the three. It’s true that its displacement is the smallest, but at 1,700 cc it’s not giving away that much to its rivals.

The Victory is the most serious rider’s bike of the three. Its refined engine characteristics, sophisticated suspension compliance and comfortable seating make it—much more than the others—more like a traditional heavyweight cruiser than a so-called “touring cruiser.” This is no surprise, as the Cross Country is directly descended from the wacky Vision full-dress tourer. Indeed, on the Fall Tour of 2009 we took a Vision and were as impressed by its ability to be hustled though a series of tight bends as we were with its ability to keep us from freezing with its effective fairing. If you’re iffy on the Vision’s looks, the Cross County is the answer to your aesthetic prayers, if not your dynamic requirements—this is a machine that requires a windscreen whose height was not dictated by a designer’s pen.

The Kawasaki, we all agreed (as much as we ever agree) is the best of the three for riding with an open face helmet on back roads with a toothpick dangling from your mouth. The toothpick is important. It’s not that it can’t prowl the highway—it can, with ease—but there is something in that riding position that fosters a laid-back approach to riding. The Yamaha’s steam-punk styling and stirring performance makes it the best bike for making a scene and being seen on. And the Victory? It’s left the building in search of a sheet of Plexiglas.

To see a comparison of each cruiser’s specs, click here.