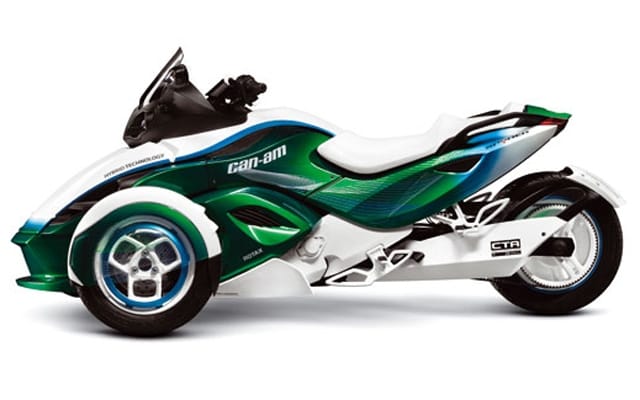 BRP is presenting its Can-Am Spyder hybrid concept vehicle to the public for the first time at this weekend’s International Motorcycle Show in New York City. The Quebec-based powersports manufacturer announced in December that it would be undertaking  a four-year research & development project in partnership with Sherbrooke University to develop a plug-in hybrid electric version of their three-wheeled Spyder roadster. The hybrid Spyder, says BRP, will be equipped with an lithium-ion battery powered electric motor and a Rotax Advanced Combustion Efficiency (ACE) engine (the same mill currently powering BRP’s 2011 Ski Doo) to be 50% more fuel-efficient than the current Can-Am Spyder, while having comparable acceleration and a 600 km range. CO2 emissions, claims BRP, will also be cut in half.

And if you’re still wondering how to describe BRP’s uncategorizable machine, they describe it as, “part motorcycle and part convertible sports car”. We’ll just leave it to you to figure that one out.