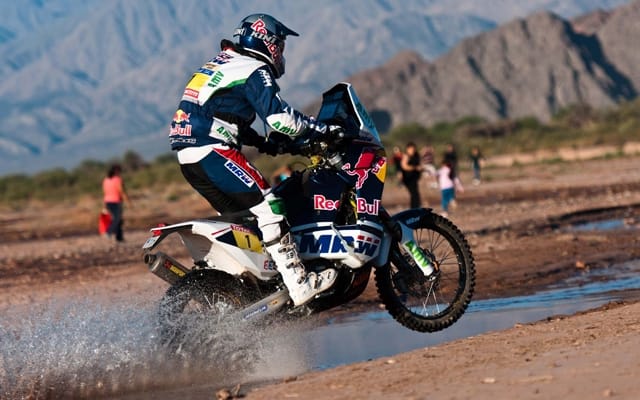 Spaniard Marc Coma won the Dakar Rally for the third time in his career this weekend, giving Austrian motorcycle manufacturer KTM their tenth consecutive Dakar win. Coma, who last won the rally in 2009, edged out last year’s winner and factory KTM team-mate Cyril Despres by a slim 15 minute margin that included 10 penalty minutes given to the Frenchman earlier in the racing week.

Knowing there was little chance to gain time during the final stage into Buenos Aires on Saturday, Despres made a last ditch effort to claw back his deficit from Coma during the penultimate stage on Friday. But Coma battled hard to keep his top rival at bay, albeit narrowly, finishing the day’s special just 37 seconds ahead of the Frenchman.

“Staying focused was essential so I did focus on my riding. It was the only way to win,” said Coma. “What was really tough was that I could not let my guard down, not even for a second. When a tough stage was ending, the next one was even tougher. We all know that a Dakar is a difficult race but this year it was particularly difficult. This victory is the reward of all the hard work, the reward of many years and a lot of tensions over the last few days. It is the bonus you get for steering right and for so many sacrifices over the years.”

Yamaha’s Helder Rodrigues of Portugal pulled in third overall, after Aprilia rider Francisco Chaleco Lopez—favoured to take the final podium spot—broke his suspension 22 kilometres short of the rally’s final finish line (perhaps karma for trying to steal petrol from a spectator’s bike early in the rally—see video below). The Chilean was towed the rest of the way by team-mate Alain Duclos to finish fourth.