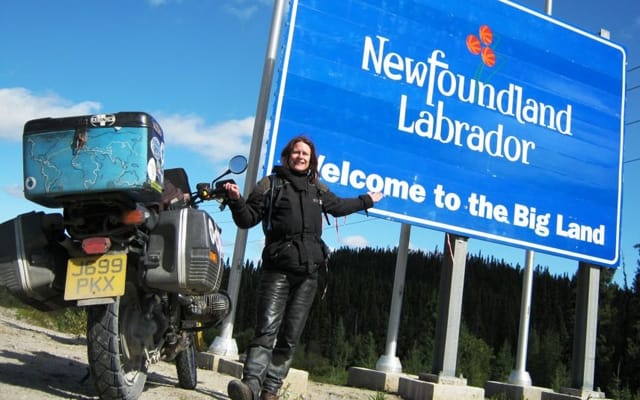 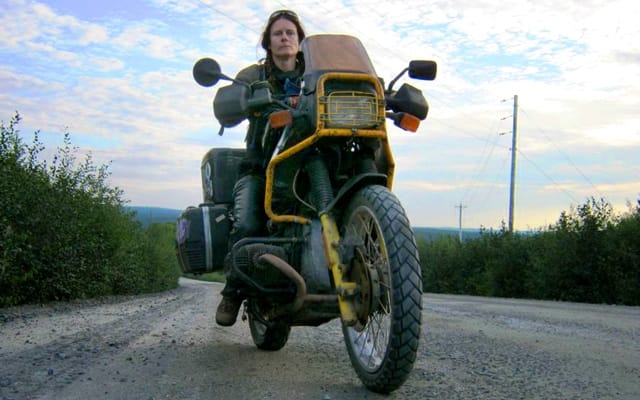 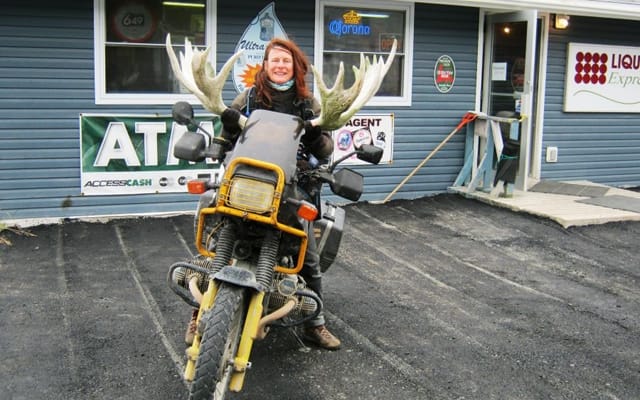 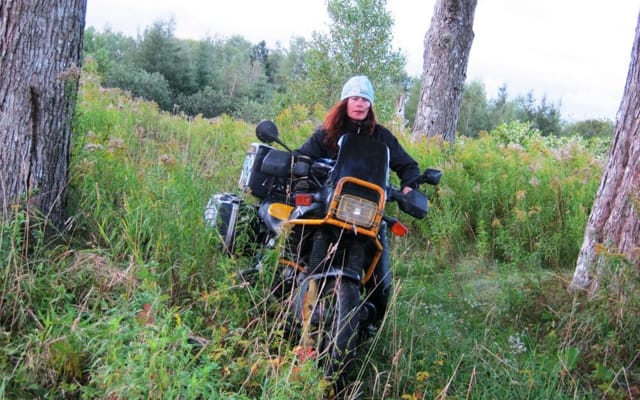 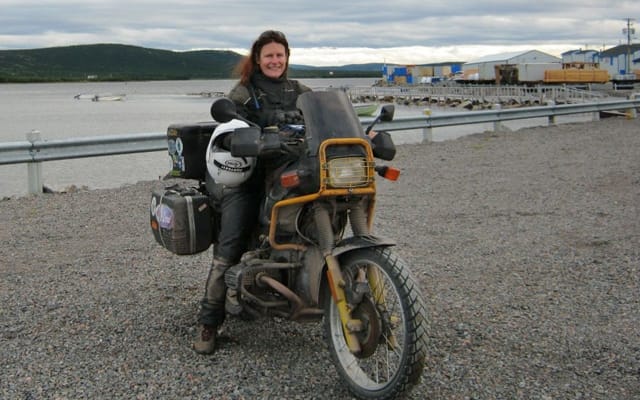 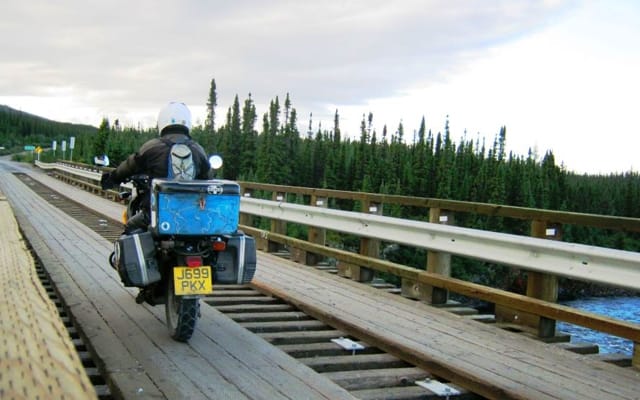 When a world traveller becomes mired in suburban Toronto, Paul Bremner braves the traffic to see what the fuss is about.

On November 10, 1871, the journalist H.M. Stanley tracked down famed explorer David Livingstone on the shores of Lake Tanganyika, in Tanzania. Emerging from the jungle after 7,000 miles of snakes, flies, and tropical heat, Stanley famously remarked, “Dr. Livingstone, I presume?”

Luckily for me, I don’t need porters and dugout canoes to track down modern-day explorer Tiffany Coates. I find the world’s most-travelled female motorcyclist locked down in the Toronto suburb of North York, Ontario, eager to get back on the road after replacing a dodgy ignition coil on Thelma, her beloved BMW R100GS.

Coates is trim and outdoorsy-looking, and remarkably gregarious for someone who spends much of her time roaming the world alone. The only hints of her life as a motorcycle vagabond are the wind-worn crinkles around her smiling eyes. But make no mistake; in a world of Long Way Down wannabes, Coates is the real deal. Over the past 14 years she has ridden from London to India, across Australia and Africa and down the length of North and South America. On her most recent adventure she explored Central Asia and the grasslands of Mongolia. True to form, on her journey through Canada she will reach one of our country’s wildest destinations: Labrador.

“I flew over it a few years ago, and it just seemed like this huge expanse of forest and lakes. There was one yellow dirt road and the plane just seemed to follow it for miles and miles,” says Coates. “I checked the map on the in-flight video screen and it said, ‘Labrador.’ I thought, ‘Right — that’s just desolate enough that I might like it.’” The rest of Canada is lovely, she says, but perhaps a little too civilized for her tastes. “I’m not a city person. I like the quiet, the lack of people.” She laughs. “God, it makes me sound so unfriendly, but it’s true.”

Coates’ definition of “challenge” fits my definition of “trauma.” She’s ridden through some of the world’s most remote areas, and her stories will make your hair stand on end. There was the time she camped on a grave in the mountains of Bolivia (It was the only piece of flat ground), the time she crashed in the Namibian desert (I was unconscious for half an hour. Luckily a bus of Swiss tourists happened by) and an incident with a thief in Caracas (I chased him through the streets. I was angry and I wanted to kick him). If you’re getting the impression that Tiff is tough, you’re right. At home in England she counsels at-risk youths and teaches women’s self-defense, and she’s schooled many a naïve traveler in the realities of life on the road.

“The vast majority of people you meet are open and friendly, especially in rural areas,”she says. “Often meeting you is the highlight of their day. But you do have to be aware. The most important thing I teach people is to project confidence and listen to your instincts. If you’re getting a strange feeling about someone, don’t be afraid to walk away, even if you might look a little foolish.”

In her tens of thousands of miles on the road, Coates has had only two confrontations that turned physical: one with the hapless Venezuelan thief, the other in 2009 in Tajikistan, on the border of Afghanistan.

The latter incident was a close call. With her mother’s 58-year-old friend riding pillion, Coates happened across a pair of young conscript soldiers on a lonely desert highway. One soldier motioned them to stop; worried about potential minefields, they complied. “One put his hand on the handlebar, and the other swung around with his Kalashnikov. They said, ‘Documenti! Documenti’—Russian for ‘documents.’ And I said, ‘Nyet documenti!’ No documents! Because once you dig out your papers, they see where you stash your valuables, and then they start grabbing your money.”

Sensing that the confrontation was escalating, Coates karate-chopped the hand gripping her handlebar then gunned the engine and zoomed off. Then she used the helmet intercom and told her mom’s friend that she’d “‘better duck down. Because if they start shooting it’s you they’re going to hit.’” Coates pauses for a moment and frowns. “The thing that really pissed me off is that all those people who think foreign countries are full of gun-toting thugs could finally say I told you so.”

Coates prefers to use her brain to solve problems, and says being a woman can be an advantage. The sight of a female motorcyclist is fascinating to people in far- flung parts of the world, and she finds she can dissolve tense situations by simply re- moving her helmet. Although people can be curious about why a woman her age is travelling without children, Coates has devised a surefire explanation. “If I happen to be with a fellow traveller who’s male, I’ll point to him with a sad look and say, ‘My husband has got a little problem.’ I get a lot of sympathy, and he never knows what we’re giggling about.”

Although Coates has her share of crazy stories, she’s quick to point out that just about anyone can set out on a motorcycle adventure. All it takes is the courage to take the first step. “My first trip was with a friend. We got it in our heads that we wanted to go to India by motorcycle. Within two months we were on the road.”

It was a steep learning curve. The girls — taking turns as pilot and pillion — dropped the BMW over and over again. But by the time they reached India their skills had risen to match their enthusiasm, and Coates was hooked on motorcycle travel. The operative word is travel — Coates remains a traveller first, a motorcyclist second.

“I can do all my own maintenance,” she says, “and I can diagnose things that someone else might have to fix. But don’t ask me about this model or that model of bike. What I love about motorcycles is where they can take you. You can follow a trail around the lake, or ride up the side of a mountain. If I see a lake, I’ll ride down to the edge and have a swim, or pitch my tent where no one can see it. It’s an inexpensive, hugely liberating way to travel.”

A few months after interviewing Coates in Ontario, I happen upon one of her blog posts on horisonsunlimited.com, the Web portal for global motorcycle travellers. A photograph shows her strapped to a spinal board and covered in bruises, but smiling that same easy smile. Her bike had blown a tire on the I-75 outside of Memphis, Tennessee, throwing Coates and her pillion to the pavement. Their injuries were painful, but not life threatening.

It was just the latest in a series of adventures in which she’d been bitten by a black widow spider in Pennsylvania, dodged hurricanes Earl and Igor, and been chased by wolves in Labrador. Labrador, however, seemed particularly worth the effort to Coates. She wrote enthusiastically about the natural beauty and the hospitality of its people. “I didn’t meet any other bike travellers the whole time in Labrador. The locals all expressed their surprise at me attempting the route on my own. And as for camping wild at the same time, they concluded that I must be mad.”

As for future plans, Coates reported that she was heading home to England for the holidays. But new adventure awaits. “I’m heading off to Mexico to dodge the banditos and the federales — it can only be safer there.”

BMW flew Coates to Turkey last year to shoot a promo video of her and Thelma. You can watch it below.