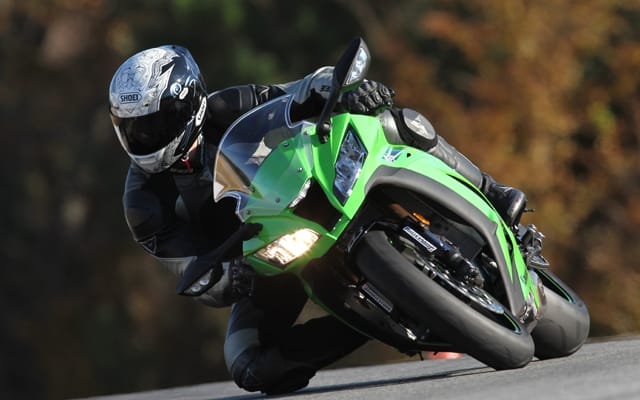 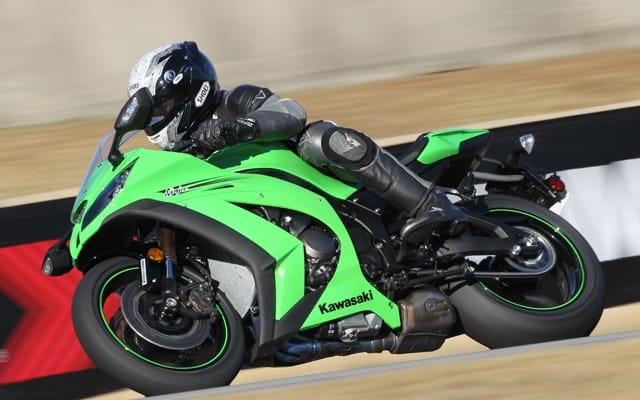 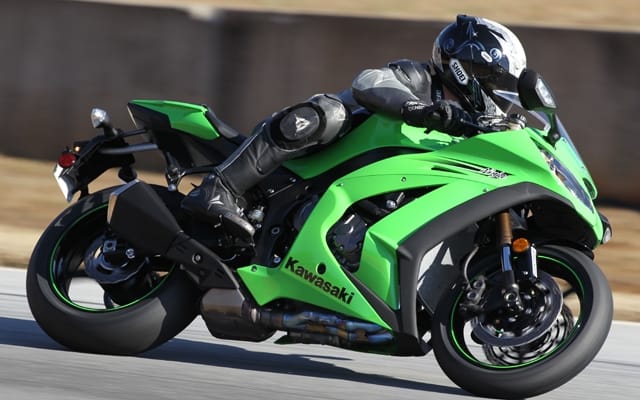 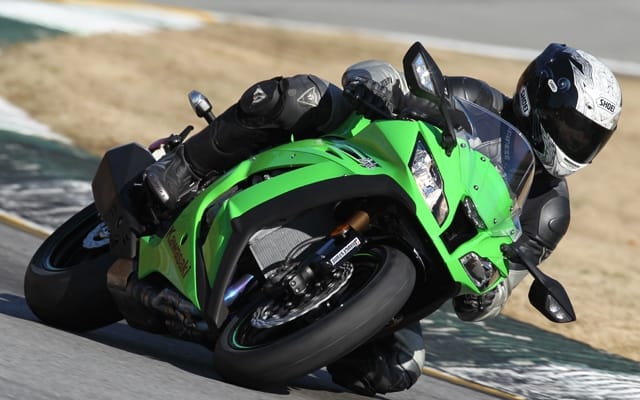 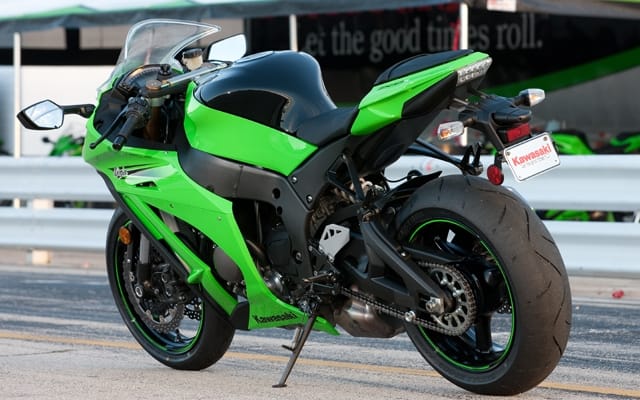 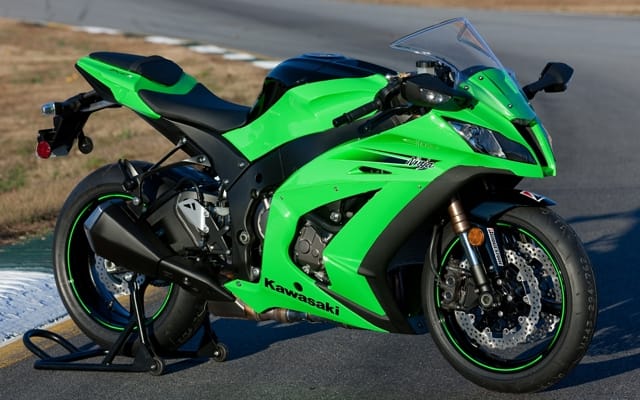 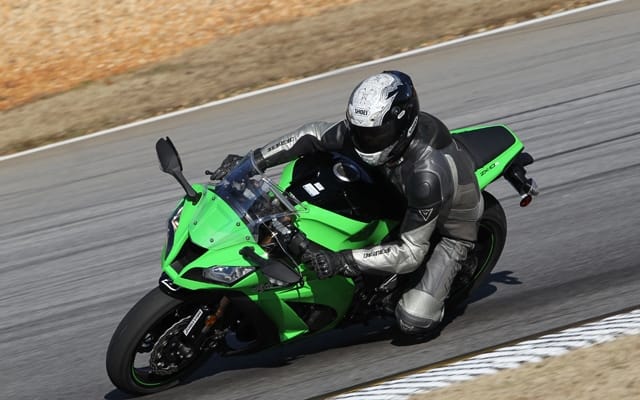 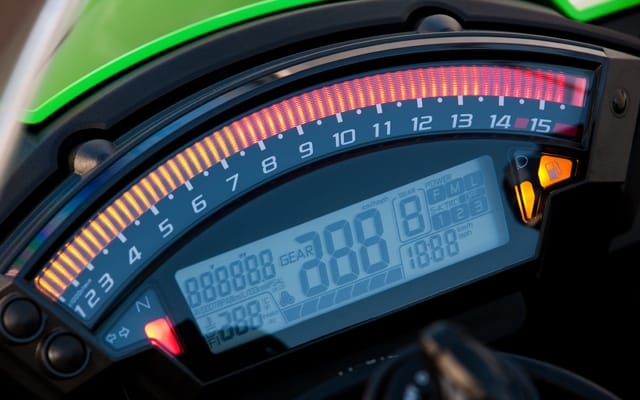 Neil Graham rides Kawasaki’s all-new supersport at Road Atlanta and  learns that even the most sophisticated traction control is not highside control.

Our breath hangs chilled in the morning air as we stand trackside at Road Atlanta and a no-nonsense Kawasaki mechanic explains the ins and outs of their 2011 ZX-10R’s S-KTRC (Sport-Kawasaki Traction Control) system. Kawasaki says its traction control is more sophisticated than anyone else’s because, they claim, it is able to predict when traction will be lost.

First an over-the-counter traction control primer. Where Ducati’s system monitors front and rear wheel speeds to determine how much rear-tire slippage to allow (to this BMW adds a sensor that determines how far over the motorcycle is leaned), Kawasaki’s S-KTRC has a broader mandate. ZX-10R electronics compare front and rear wheel spin rates (like the Ducati and BMW) but additionally cast a watchful eye over throttle position, the rate of acceleration, and engine rpm. When rear wheel slippage is detected, ignition is altered to suppress power output.

The predictive aspect of the system is a little more difficult to explain. A computer-generated animation of a rear wheel at the point of losing traction is used to illustrate this feature to us magazine hacks the night before. Whereas non-predictive systems abruptly cut power to return the spinning wheel to a state of traction, Kawasaki’s system, according to the video, can use the information at its disposal to anticipate when the wheel will lose traction. So instead of chopping engine power, the computer can slowly reduce engine output at the point where traction disappears. The result is a seamless transition not felt by the rider. Enough of all this; let’s get back to the track.

With the Georgia sun now heating the track and with sticky tires poached by tire warmers, there is no reason to use anything other than Full power on the 3-level power mode switch (75 and 50 percent power are the other 2 options). The decision on where to set the traction control level is not quite so easy to determine. Level One, which is least invasive, allows wheelies and power slides as long as forward momentum is not compromised. By the time you get to level Three the system makes sure that both wheels stay on the ground and perfectly in line.

I begin in level One but the combination of learning a new track, the front wheel’s tendency to become airborne, and my relative inexperience with traction control threaten to take me out of my comfort range. Switching to level Two, and later to level Three (which can be done on the fly once the desired mode is selected and the throttle momentarily closed) allows me to ride the bike as hard as I can and not worry that a little wheelie will turn into something big enough to intimidate me into rolling out of the throttle.

A rarely discussed aspect of acclimating to traction control is the difficulty that the mind has in allowing the wrist free rein. No matter how many times in the past I’ve told myself that I can just hold the throttle wide open and not worry about losing the tail end, something happens between pit road and the first corner. And it isn’t just recreational track riders like me who struggle. National-level racers first confronting traction control often try to finesse a throttle that they are supposed to turn to the stop. Call it a survival instinct.

I don’t know if it’s because of my prior experience with the traction-control systems of Ducati and BMW or if the professor’s long-winded lecture the night before subconsciously convinced me to put my faith in electronics, but, especially with the system in level Three, I finally convert to the church of traction control. At the apex of the corner and with my knee on the ground I twist the throttle wide open and steer. And my fears dissolve. The S-KTRC system is so slick and so invisible that I catch myself thinking I’ve suddenly become a more confident rider all by myself. But that’s not the case.

With power-induced highsides removed from my mind, I can redistribute my remaining attention to matters such as braking points and shifting points and the fastest line to get around the circuit. I’m more relaxed, my lap times are a little quicker and, most importantly, I’m having more fun. And then I nearly crash. And then I crash back to reality.

My near highside is the result of too much lean angle and nearly riding off the edge of the tire. Later a rider loses the front wheel in a corner and tumbles into the weeds. Learning what traction control does and what it doesn’t do is part of the education process, and as impressive as the technology is, it isn’t an autopilot that can take off and land your motorcycle by itself. But by monitoring and controlling one of the main elements involved in riding a motorcycle quickly, it makes it that much easier to throw caution to the wind — cautiously, of course.