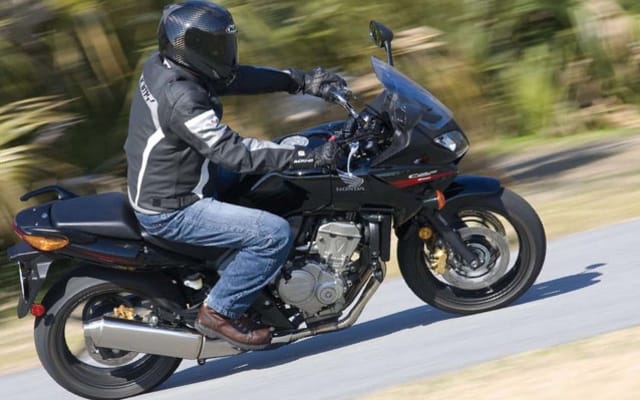 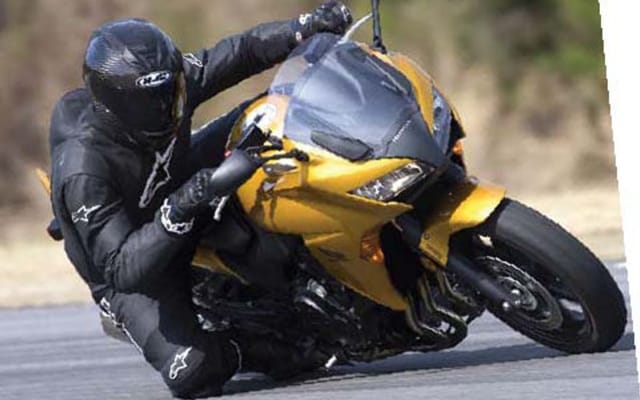 They are motorcycles that are quintessentially Honda—smooth, quiet, and practical. But while the CBF1000 is an easygoing litre-bike, can we really call the CBF600 a stepping-stone for sophomore riders?

Mile after monotonous mile the featureless highway sapped my enthusiasm. With the steady drone of the engine as the soundtrack to my boredom, I wondered if Honda’s CBF600 middleweight would be palatable for sophomore riders ready to move up from the CBR125R lightweight— as Honda is hoping—or is it just too great a leap in power, weight, and performance?

It would have been one thing if the CBF600 had been introduced as simply a new middleweight, but a 70-something horsepower, 222 kg motorcycle appropriate for beginners? Has Honda forgotten what it’s like to be a young and inexperienced motorcyclist? Of course they haven’t—they’re just desperate to fill a hole in the 2010 range.

We lauded Honda Canada for the foresight to import the CBR125R. Nearly singlehandedly they injected a shot of youthfulness into the domestic motorcycle scene, but after a great opening they stumbled when it came to the second act—a middleweight machine for graduating 125 riders. The most tantalizing next step in Honda’s global arsenal is the CB400 Super Four, introduced in 1992 and popular in the Asian market. With ABS, a liquid-cooled inline four, moderate weight and compact dimensions, it would be the ideal machine to keep CBR125R riders in the Honda family. This idyllic scenario didn’t play out (according to Honda Canada) because the costs to import the CB400 and to homologate it for use in Canada would have resulted in it costing as much as larger displacement models. The unfortunate truth for motorcycle manufacturers and for enthusiasts of small motorcycles is that little bikes aren’t very profitable.

Honda Canada is hoping that the CBF600 will step in and fill the void, and they dutifully point to the model’s success in Europe, where it outsells the Ducati Monster 696 in the Italian market.

Visually, there is little about the CBF600 that would entice a rider to glance back for a second look before closing the garage door.

Only available in black, the bodywork is dominated by a half fairing with a twoposition- adjustable windshield and large 20-litre fuel tank that should allow good range between fuel stops. The upright riding position and comfortable three-position- adjustable (770, 785, and 800 mm) seat make the CBF600 a useful companion on longer rides. In its lowest position, the seat (perhaps not coincidentally) is the same height as the perch on the CBR125R.

The 599 cc liquid-cooled inline-four would only disappoint riders stepping down from a litre-bike—for riders stepping up from a 125, power is more that sufficient. Like all middleweight fours, this one likes to rev, but a slick-shifting gearbox and light clutch action aid progress. Top gear is on the short side, which caused the engine to spin at a busy 5,000 rpm at 100 km/h. A high-frequency vibration that appeared at 6,000 rpm kept highway speeds down in the search for smoothness.

Linked ABS braking utilizes the same components found on the CBF1000 and allows stopping prowess nearly on par with a sportbike. I had expected the CBF600’s cost-conscious preload-only-adjustable 41mm fork and single rear shock to be overwhelmed by the bike’s speed potential and braking force, but the ride remained compliant even while riding aggressively. Equally surprising was the bike’s capability on the racetrack. A stout aluminum frame allowed the footpegs to be ground down in safety.

Do any of these qualities make the CBF600 a reasonable choice for someone trading in their CBR125R? Absolutely not. Experienced riders forget how slowly skills and confidence develop. They also forget that 30 years ago the CBF600’s weight and power would have classified it as nearly a superbike. Learners who have gained confidence quickly on a smaller bike and who are comfortable with the CBF600’s physical size may make the transition to it easily, but the risk, for some beginners at least, is that the lessons learned on the CBR125R will be undone by a bike that gives them too much, too soon. And though it’s a competent allround machine, at $9,900 with ABS it’s over $1,000 more than non-ABS competitors such as Yamaha’s FZ6R or Kawasaki’s twin-cylinder Ninja 650R. While the Honda has its merits as a middleweight, it’s not the bike that many CBR125R lovers had hoped for. And that’s a shame.

Another European model coming to Canada is the redesigned CBF1000. The old model was our long-term test bike in 2008 and we had few quarrels with the machine beyond its bland façade—a criticism that has been addressed. A sharper, more contemporary look comes via a larger upper fairing and features a four-position manually adjustable windscreen. Missing from the CBF1000’s flanks were the hard panniers that I had became accustomed to seeing on our long-term bike. But Honda reminded me that panniers had been an option on our ’08 test bike, and they remain a $1,180 option to the CBF1000’s base price of $13,000.

At the heart of the bike is the same 998 cc fuel-injected and liquid-cooled 16-valve engine found in last year’s model. Originally sourced from the 2004 CBR1000RR supersport, this year’s motor has been fettled by engineers to achieve modest performance gains and a broader distribution of torque. Five additional horsepower and a fractional increase in torque is worth mentioning because the bike is five kilograms lighter— due in part from a switch to aluminum from steel for the frame material.

The CBF1000 reinforced my belief that litre bikes are the ideal motorcycle for a lazy rider. The engine pulled hard through all six of its easily selectable gears, and whether you’re flailing on a racetrack or picking your way through the city, the mill’s flexibility allows lackadaisical shifting habits. Honda’s claim that fuel efficiency is seven percent greater can be monitored as the CBF1000 comes with a computer that displays fuel consumption in real time. (Twin LCD screens and a large centrally located tachometer replace the old bike’s rotary dials.) Allied with a 20-litre fuel tank, range should be impressive.

Revised suspension components are firm enough to allow solid roadholding but supple enough for compliant bump absorption. With front and rear tires exactly the same size as the CBF600’s, and with only 23 kilograms more than the 600 to haul around, the big bike handles almost as nimbly as the little one, and is easily hauled to a stop with its ABS-equipped linked brakes. The adjustable seat can be lowered or raised 15 mm from its 795 mm standard height. The impression from the seat is of a bike more compact and manageable than expected for its displacement. However, as with the previous CBF1000 (and the current CBF600) the handgrips seem as closely spaced as the handles of a garden gnome’s wheelbarrow. It wasn’t that the extra leverage from a wider bar was required to manhandle the machine, but a pair of grips slightly farther apart would allow for a more natural fall of the arms. For its level of performance and build quality $13,000 is a fair price, as long as you like yellow, as it’s the only choice—I like it, but I play for a hockey team with pink jerseys, too, so consider the source.

The CBF600 and CBF1000 are blue-collar motorcycles that efficiently and quietly perform to a high standard. They’re meat-and-potatoes motorcycles adept at commuting, lightduty touring and use as general runabouts. In Canada, with our limited-by-nature riding season, nearly all motorcycles are used as frivolous entertainment. Markets with longer riding seasons see motorcycles differently—for some a motorcycle is a cost-effective alternative to the automobile. For riders in most of Europe, for example, the number of wheels is the only significant difference between a Honda Civic and a Honda CBF. Call them motorcycles with practicality deeply imbedded in their DNA.