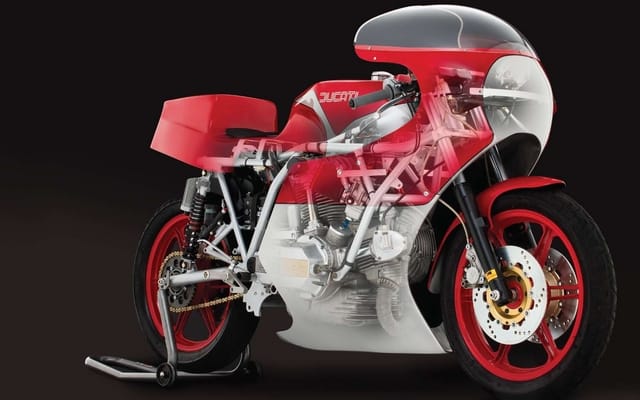 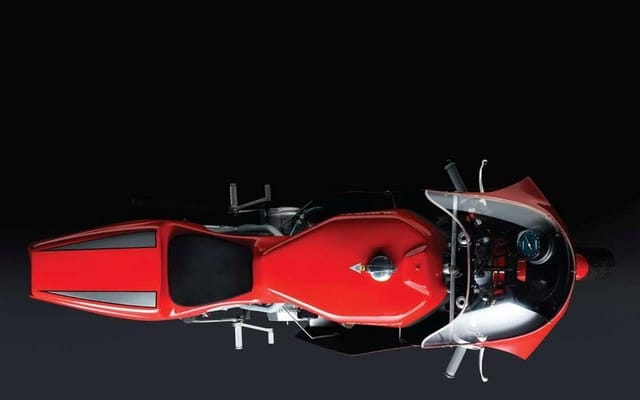 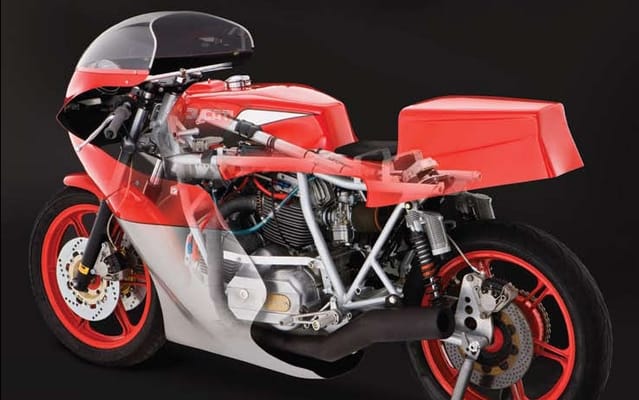 It’s easy to make a beautiful motorcycle. Just start with a big pile of cash. It’s a far greater challenge to make more from less.

When you’re an enthusiast of old motorcycles, you collect parts like the Goodwill collects threadbare trousers—by the ton. And those parts do not sit silently. They taunt you when you pass, begging you in their wordless way to become part of a whole again. Toronto’s Paul Hewitt has heard the voices—and twice has heeded their prodding. In 2008 he finished a replica of the bike that Mike Hailwood rode in 1978 to win the Isle of Man TT—and then promptly sold it (and in the process illustrated a truism: a project drawn out too long stretches its creator to snapping—long before it’s finished, you’re finished with it). Hewitt resolved to take the second bike from concept to completion quickly and inexpensively.

Fast and cheap are words not normally associated with vintage Ducatis—but a leftover frame from a ’79 Darmah (an electric- start roadster in a softer state of tune than the thundering 900SS sportbike)— started Hewitt on his way. Modern Ducati V-twins have overhead cams driven by toothed rubber belts that trace their lineage back to the Pantah model of the ’80s. Before the Pantah’s belts, long shafts extending from the crankcase to the cylinder head operated a Ducati’s camshafts. At either end of the shaft was a bevel gear—hence the term bevel-drive twin. Bevel drive to the camshafts is an elegant engineering solution that harks back to the days when overhead cams were race-only exotica. It also has a more subtle appeal. To operate so vital a component as a camshaft with a flimsy rubber belt (though they are perfectly reliable) is an affront to the metallurgist’s vocation— a neglected belt can perish, but a metal shaft butted with a pair of gears will forever spin.

When Hewitt found a $1,000 basket- case bevel-drive engine from a ’76 860 GT the project began in earnest. (The 860 GT, incidentally, was a hideous abomination of a motorcycle styled by a car designer—they look better as basket cases than as assembled motorcycles.) Hewitt, a tool and die maker by training, has travelled extensively (he taught English in Brunei), holds an Ontario teaching certificate and is currently the service manager of a Toronto Harley-Davidson/Ducati dealership. This was his first time rebuilding a bevel-drive Ducati engine. “If you understand tolerances you can rebuild just about anything,” says Hewitt. “It also helped that I wasn’t in a hurry.”

The year after Hailwood won at the IOM on a Ducati, he returned to the island and finished fourth, and it was this machine that Hewitt planned to replicate. But first we must define the term replicate. Purists would scoff at the idea of a non-desmo-powered (GT models have engines with conventional valve springs) replica of Hailwood’s machine. Perhaps “inspired by” is a better term than “replica.” But who cares about the purists, anyway?

A Bologna-based company named NCR prepared Ducati’s racing bikes of the era, and Hewitt’s project was given a boost when for $150 he purchased a wrongly identified NCR exhaust system on Ebay. The 40 mm Dell’Orto carburetors were also an Ebay find. Hewitt didn’t see a problem with repurposing an old GT engine but the stock engine’s output of 50-something horsepower was unacceptable for a faux racer. The cylinder bore was hogged out to 92 from 86 mm, upping capacity to 983 cc and the compression ratio to 11.5:1. Carillo rods, oversized valves, gas-flowed heads, Lucas Rita electronic ignition and a dual-output Dyna coil boosted the estimated horsepower into the mid-70s.

Airtech in California provided the Hailwood-replica nose fairing but the resourceful Hewitt hand-laid the fiberglass for the combination seat, tank, and tail section. Hewitt had previously purchased the mould from Body Double, but when I asked if he was willing to duplicate the bodywork for other enthusiasts, he hesitated—then admitted that he had been light-headed for three days from the fumes even though he had worn an approved respirator. So no, he really doesn’t want to make one for you, but don’t take it personally.

With the engine installed in the frame, the rest of the bike came together quickly—the only significant issue was an exhaust pipe that fouled the fairing, a problem rectified by notching the pipe to allow it to tuck closer to the engine. The (re-sprung) fork and front brake calipers are standard Darmah bits, and the $130 Tarozzi footpegs were adapted to the stock Darmah frame. The final touch was NCRinspired paintwork by Extreme Measures in Oakville, Ontario.

After work in his employer’s back lot, Hewitt starts his creation and runs it around the parking lot. It’s loud—true—but with a sympathetic rebuild of an inspired design the volume does not disguise its finely wrought components. It was completed in a year of evenings and at a cost of $7,000; Hewitt has only to fine-tune carburetor jetting in anticipation of a Ducati Owner’s Club of Canada track day. Not bad for a bike built, in Hewitt’s words, as a “poor man’s version of a truly great motorcycle.” We’re sure that Hailwood, had he not met his end in a humble sedan on the way to the shops, would have agreed.