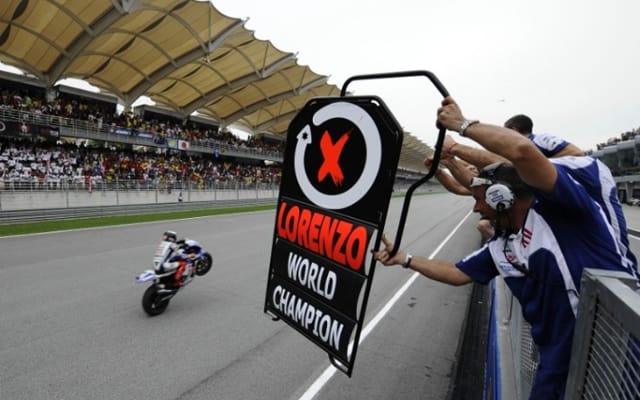 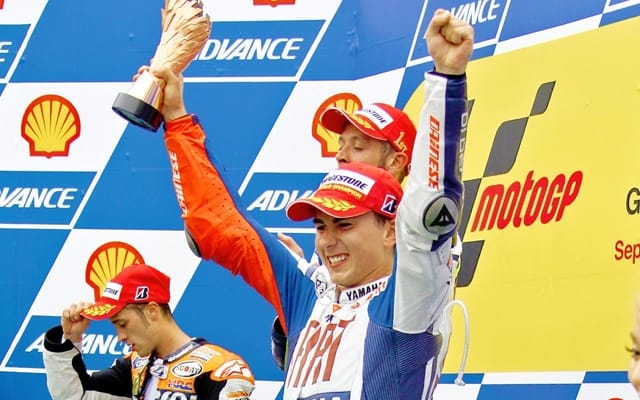 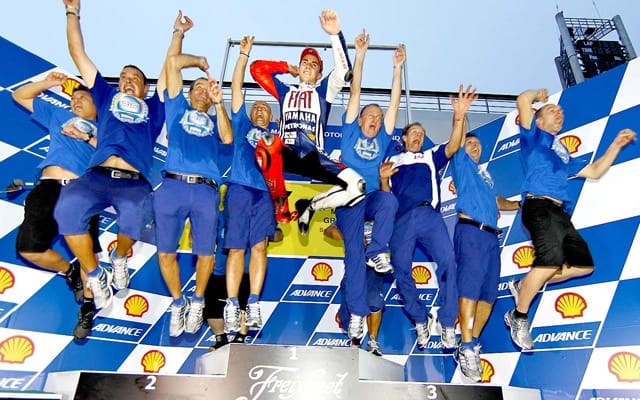 Defending champion Valentino Rossi put on a spectacular show in a come from behind win, his first since the season opener in Qatar, on a day in which his arch rival and current team-mate took his crown. A third place finish in the race at Sepang today was enough for Jorge Lorenzo to secure the 2010 MotoGP championship.

Pole-sitter Lorenzo led as the race got underway, while Rossi had a disastrous start, dropping back to 11th on the opening lap. Even more disastrous was Casey Stoner’s (Ducati) first lap crash that put any hope for his third consecutive win to a sudden end. Honda rider Andrea Dovizioso stuck with Lorenzo and the two to established a slight gap up front, but by lap 3 Rossi had already recovered to fourth position and was soon into third and quickly closing in. Rossi and Dovizioso repeatedly traded first place in what was a thrilling fight to the end, but the defending champion was not to be denied his second win of the season and crossed the line 0.224s ahead of his compatriot. Lorenzo held third and with his 13th podium in 15 races cemented the 2010 title.

Here’s what 23 year-old Fiat Yamaha rider had to say about his achievement:
“This is my first title in the premier category and my dream has come true! This is really the maximum a motorcycle rider can achieve in his career so we have to celebrate and enjoy these hours, minutes and seconds like it’s the end of the world. You imagine this moment in your head your whole life but when it comes you don’t know how to act or what to say. I am trying to be relaxed, to speak clearly and not say anything crazy! I’m so tired right now; I just need to be alone in a room for a few minutes, just thinking about what I’ve done!”

“We have come such a long way; some things happen very slowly in your career and some very fast. When I started in the World Championship I was almost last in the 125 class but in only eight years I have become MotoGP World Champion. It’s incredible how life can change. We have fought so hard and for this. I’ve been fortunate because I’ve had good luck, good bikes and good teams. I’ve always been surrounded by people who want to best for me and I am very grateful for this.”