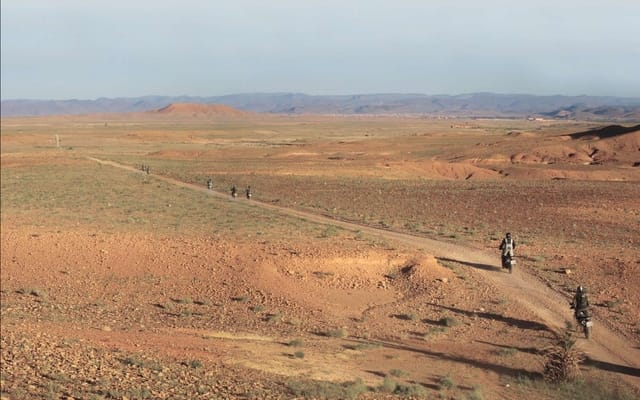 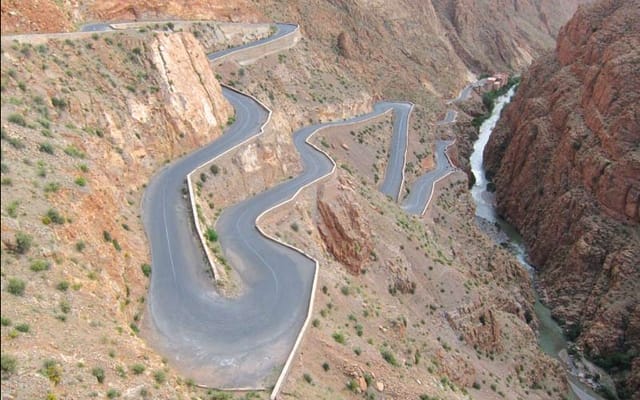 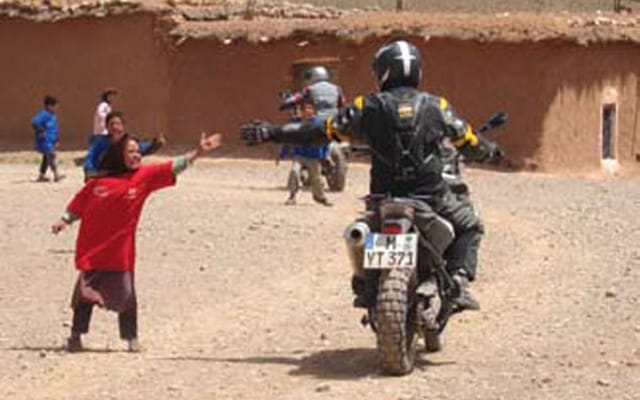 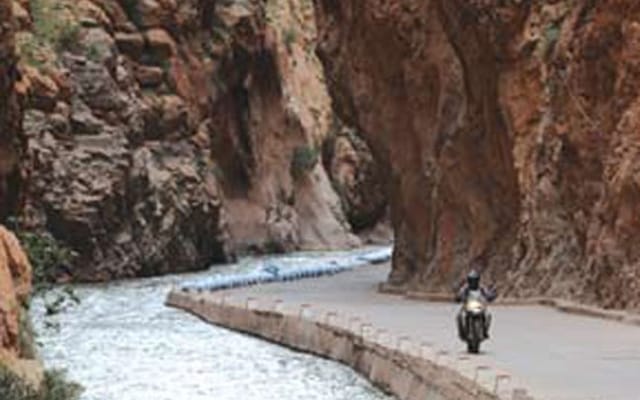 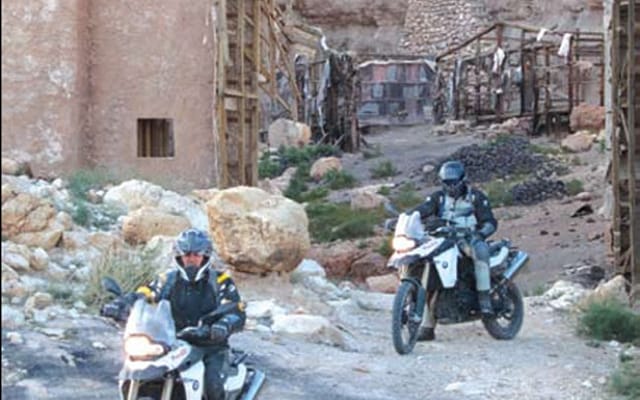 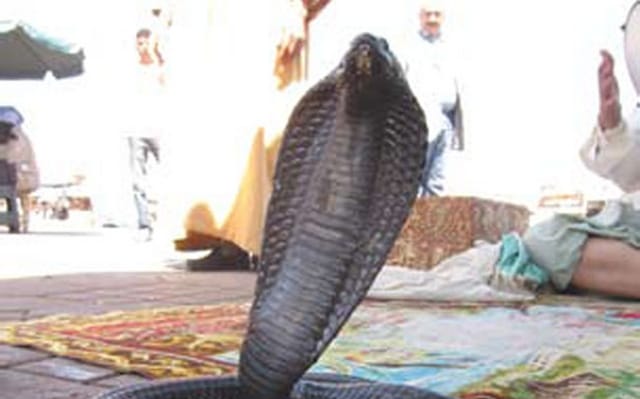 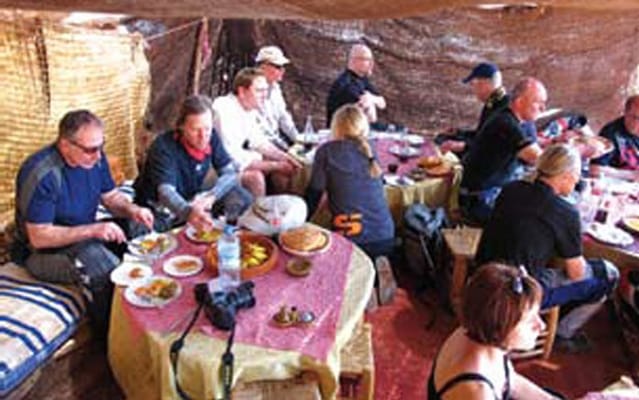 When the head of BMW Motorcycles invites you on a tour of Morocco, you jump first and ask questions later. And as David Booth discovered, sometimes it’s better not to know what you’ve agreed to.

You know you’re in deep shit when, before you start riding, a doctor takes pictures of everyone. “So I know which limbs to re-attach to whom,” said sardonic sawbones Axel Thiäner, a trauma surgeon from Munich who was accompanying our little ride. That our mobile medic was having sport with us—German style—was little consolation. We had seen his mobile drug cabinet, which contained all the necessary gear to perform a roadside hip replacement (and some Propofol, Michael Jackson’s drug du soire, in case any of us had trouble sleeping). Wait a minute. Doctors? Trauma surgery? Would somebody please explain to me why I might need medical attention in the first place? What is this?

This was a 1,000-kilometre, off-road (mostly) ride through the heart of Morocco. We would leave the relative civility of Marrakech to traverse some of the craggiest places on earth: the famed Atlas and Jebel Saghro mountains and the Gorges du Dades. As dangerous as that was, the good doctor was not here for us. No, Doctor Feelgood (Thiäner dispensed a mean muscle relaxant, as I discovered after a spill on the first day) was here because Hendrik von Kuenheim, head of BMW’s Motorrad division, was here. Journalists may revel in delusions of self-importance, but there was only one man on this trip who actually mattered. Put another way, if we all lose our limbs simultaneously, I know who the good doctor is saving first. The impetus for this escapade was that von Kuenheim used to be CEO of BMW Canada, and would often join press rides when his schedule permitted. Over the ensuing years, we (Jeremy Cato of the Globe and Mail, car-and-business television-program host Michael Vaughn, and me) have bugged him about going for another ride. Since Kuenheim became the general director of BMW’s motorcycle division, our queries (read, whining) became more insistent. Since he’s the man in charge of logistics—or at least the man in charge of the person in charge of logistics—I can only assume that central Morocco appealed to him.

As for me, I’ll ride anywhere, though having not ridden anything with knobby tires for more than five years, I was filled with apprehension, a vague unease that turned into full-bore trepidation when I thought of trying to muscle a 225-kilogram R1200GS through deep sand. Ever the pragmatist (read, coward), I insisted on riding an F800.

Sometimes cowardice leads to inspired choices. When push came to shove (as in trying to push the big beastie out of a sand wash or humping, trials-like, over big boulders), the lighter 800 was the right choice. Hardly to be described as lithe, the F800 is still almost 50 kilos lighter than the R1200, a reduction that was keenly felt during one particularly long plod through a washed-out river bed covered in the soft, wheel-swallowing, golf-ball-sized gravel that threatened to turn the entire trip into a Survivor episode. Correcting the inevitable front-wheel washouts and sometimes-spectacular rear-wheel slides was a lot easier on something that didn’t feel quite as heavy as a touring bike.

What was surprising—indeed, extremely surprising— was how easily the big 1200GS (outfitted with Continental TKC 80 off-road tires) handled the rest of the off-roading. Yes, shaft drive and that bulky engine caused it occasionally to feel like trying to dock the Queen Mary without a tugboat, but that same hulking opposed twin keeps the centre of gravity admirably low. And the R1200GS’s front-to-rear weight balance is almost ideal, making all but the slowest and softest terrains remarkably easy to traverse. Thanks to that lower centre of gravity and its much smoother lowspeed throttle response, the R1200 was actually easier to navigate than the 800 on some trails, especially distinguishing itself on rough, rocky descents.

And Lordy, did we see rocks. Northern Africa may well be full of sand dunes, but we saw none of those. What we did see were rocks. Small rocks and big rocks, sharp rocks and round rocks, bare rocks in massive outcroppings, others seemingly strewn specifically to send the front wheel of a BMW GS piloted by a nervous (scared shitless) journalist slewing sideways. Did I mention that the rocky roads were often accompanied, in the finest tradition of Third World civil engineering, by steep and prolonged drop-offs? It was some of the toughest, scariest, and most attention-focusing off-roading I’ve ever done.

Riding up the north side of the Tizi-n’Tazazert pass, for instance, proved challenging for those of us who were meagerly talented. What passed for a road looked more like a photo of rock-strewn Mars than any terrestrial topography I’d ever seen. Approaching the summit, we, as manly men are often wont to do, congratulated ourselves on our burgeoning enduro skills, only to watch a local—clad in tennis shoes and a baseball cap, a cigarette dangling from his lips—start down the very same goat path aboard a Docker 50 scooter complete with chrome passenger floorboards and bald street tires barely an inch wide. We, the so-recently pompous, were consoled by the fact that he couldn’t make it down the tougher south side of the pass.

However, had our five-day sojourn been nothing more than a death-defying (Cato, at his last count, went ass-over-tea-kettle seven times, and I still have a nasty welt on my elbow from protracted dirt diving) traipse through rural Morocco, it would not have turned into the two-wheeled trip of a lifetime. But while the original impetus had been to revisit my acquaintance with my old friend Hendrik, what I really took home from my week abroad was an overwhelming appreciation of all—the people, the culture, the food—that is Morocco.

Rural Moroccans, for instance, offer the epitome of welcoming hospitality. While urban Morocco is most definitely Third World, albeit with a burgeoning tourist industry (Marrakech is something of a Las Vegas-style destination for Europeans), the countryside is positively medieval. Kids in Marrakech often have to play soccer in the street because the community can’t afford a playing field; kids in the hard-bitten villages along our dusty trail couldn’t even afford the soccer ball.

Yet we were universally greeted with good cheer even though we were often riding through someone’s front yard or vegetable patch or laundry room (local women use the river beds to hand-pound dust from clothing). Inevitably, every kid in the village would rush out to greet us, the girls usually to wave demurely while the boys, seemingly having watched way too much NBA on the communal satellite TV, would try to high-five us with the enthusiasm of a Karl “the Mailman” Malone slam dunk (sore shoulders as a result of these forcefully enthusiastic greetings were often the justification given the good doctor for his, er, muscle relaxants). Nor was this just a precursor to the Third World tradition of cadging dirhams. We saw precious little panhandling. Moroccans may well deserve their reputation as ruthless negotiators (they will try to sell you the very rocks you just rode over), but pleading for alms was rare indeed.

And the food! I have a new favourite cuisine. Move over sushi and forget all this “raw” food nonsense. Everywhere we went, no matter how far off the beaten path, the repasts were nothing short of spectacular. Nothing was fancy (Cato captured its essence perfectly, describing the fare as “simple, well-prepared peasant food”) but obviously the delectability lies in the details. One simple salad, mostly tomatoes and onions a la bruschetta, was captivating; I considered stuffing my pockets to take some home with me.

And, of course, the countryside was always full of surprises, not the least of which was that Morocco seemed to have been very popular with movie producers. Outside Ouarzazate, we found the “Jerusalem” set for The Last Temptation of Christ. At Aït Benhaddou, the entire ksar, or city, was renovated for the filming of Lawrence of Arabia and has been a UNESCO World Heritage site since 1987. Other temporary monoliths included a miniature double of Mecca and another ruin that could have passed for anything from Agadir to the Alamo.

But, for my favourite place, we have to go back to the aforementioned Tizi-n’Tazazert. High atop the Jebel Saghro mountains, despite the relative impassability of the track, stands a hotel. Not anything you or I might normally recognize as a hotel, but a rocks-and-mortar “lodge” that could well have been built a millennium ago (it was christened in June 2005), so basic are its accommodations. But the food, limited though it is, is great, the peppermint tea is piping hot, and the view is spectacular. There is even a 12-by-eight-foot presidential suite with a primitive outhouse down the hill and a rock floor covered with numerous blankets to soften the sleep that costs 120 dirhams, barely enough for a McHappy meal in Canada. Best of all, of course, is the seclusion. Other than motorcycle adventurers and the occasional truly mad off-road bicyclist, your world is completely at peace. Book a room atop Tazazert and you will never be farther away from it all.

The hard part is getting there. You’ll certainly need knobby tires. And it might not be a bad idea to bring your own Dr. Feelgood, or at least his pharmacy.