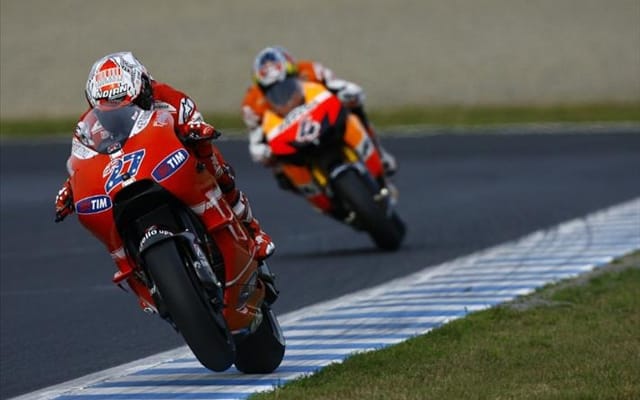 The race’s real drama unfolded behind them as Lorenzo and his Fiat Yamaha team-mate Valentino Rossi repeatedly locked horns during the final two laps in the battle for third. The furious back and forth that at times saw their bikes scraping against each other ended with Rossi on top holding Lorenzo off the podium for the second race in a row. Afterwards the Spaniard exclaimed his displeasure over some of his arch rival’s tactics.

“I have to say that at some points I do not think he was completely fair,” said Lorenzo. “We were both on the limit but some of his moves were maybe a bit too much and he touched me and pushed me wide when I don’t think it was right. We are team-mates, I am fighting for the riders’ championship but we are both fighting for the teams’ and manufacturers’ championship as well and we have to remember this.”

“The show is great for the business of motorcycle racing,” Lorenzo added later. “But when you are a rider and on a MotoGP bike reaching 300km/h on the straight and 180-200km/h on the corners, and you are feel the other rider touch you. It is not a good feeling. You know you are putting your life at risk.”

Perhaps Jorge didn’t read Vale’s interview in Italian GQ where the defending world champion said, “When you’re hurt and start bleeding, the younger guys feel immediately stronger and think that they can tear you apart, it’s like the jungle. But I like it and that’s the way it should be. At first, Lorenzo, like Stoner, said: “Ah, Valentino was my hero when I was little,” but that’s not true. It’s bullshit. I am just an obstacle, a target, as Biaggi was for me. When two people are fighting for the same objective, it’s normal to hate each other. Whoever denies it is lying. I’m not saying it’s a murderous hatred, but it is violent.”

Yamaha boss Lin Jarvis said they told Rossi afterwards to go easier on his team-mate in the future.

“After the race, Jorge came to us and asked our opinion of Rossi’s behavior during the race. There were four of us. Besides me, there was Furusawa and another two people from Yamaha. We, together, were in agreement with the fact that a battle like that between team-mates makes no sense. We expect our riders to race with a higher margin of safety, and they were too close today. After that, Furusawa went to talk to Valentino, and he asked him to adopt a different approach when racing other Yamaha riders. We made our position clear. The race was too tight and too difficult. You don’t do this; especially considering the situation in the championship.”

Still, Lorenzo has now increased his title race lead to 69 points and is virtually assured his first MotoGP crown after countryman Dani Pedrosa fractured his collarbone in Friday’s practice. Lorenzo has 297 points to Pedrosa’s 228 and needs only seven points next weekend in Malaysia to clinch the championship. Honda have yet to say when Pedrosa, who had surgery to repair his injured shoulder, will return.

Stoner sits third in the standings on 180 points with four races remaining.