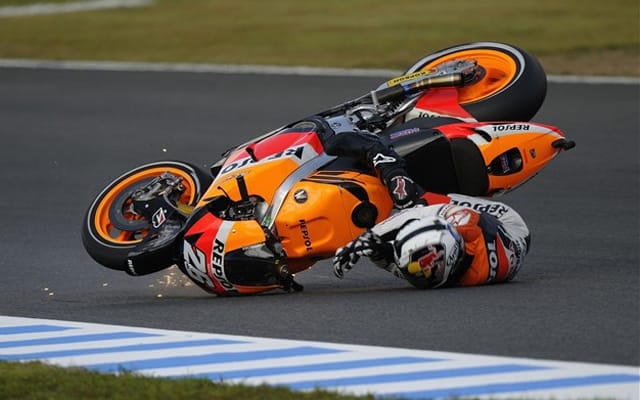 Dani Pedrosa’s chance to win the 2010 MotoGP title ended today when he crashed hard in practice at Motegi and broke his collarbone in three places. The Repsol Honda rider will immediately return to Spain for surgery and also miss next week’s Sepang GP but could be back for the race at Phillip Island on October 17th.  With his only remaining rival out for at least the next two races, championship frontrunner Jorge Lorenzo is now virtually guaranteed the 2010 crown.

“Obviously this has been a really bad day for us,” said Pedrosa afterwards. “It was a strange crash in only my second full lap, in a slow section of the track. I tried to stop the bike as usual but I knew something was wrong and couldn’t avoid going down.

Honda later confirmed in a press release that the crash was due to a sticky throttle on Pedrosa’s RC212V that remained open as he braked into turn 9.

“After the crash I knew immediately that I was injured because it was very painful. I had a big impact in my left ankle and also my collarbone was broken as I hit the track – so obviously it feels very unlucky because recently we have had really good results. I’ve been very healthy through the pre-season and through the year and we had been working a lot to get to and stay at the maximum level. Another injury to contend with is really not what I needed – I don’t feel as though I deserve it.

“Anyway, once the doctors had checked everything here, we decided it was best to go back to Spain for the operation. I hope it goes as well as possible and that I can return to racing soon.”