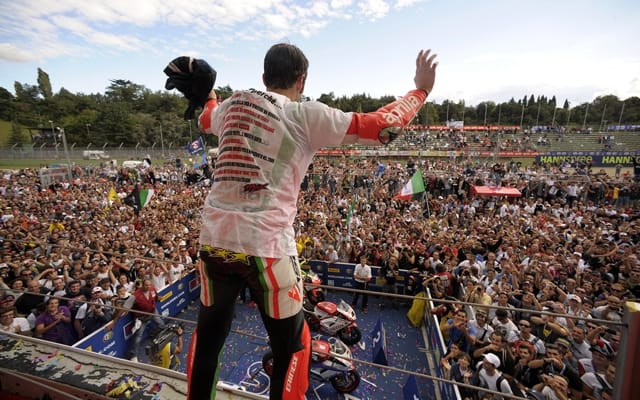 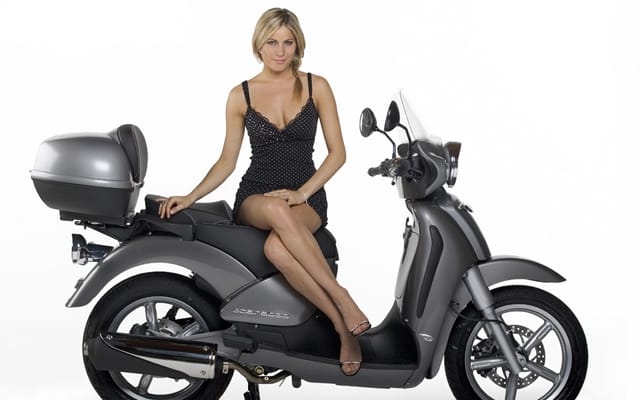 Max Biaggi donned a interesting celebratory T-shirt before accepting his 2010 World Superbike Championship trophy on Sunday. The front of the shirt was emblazoned with 5 stars, one for each of his five world titles: four straight 250cc championships (Aprilia and Honda) and now this first Superbike crown. The interesting stuff though was on the the back of the shirt where the Roman Emperor listed the 10 reasons why he was victorious in Aprilia’s second year of racing with the RSV4. Here they are translated into English:

1. I’ve been chasing a fifth star for a long time

2. I am the first Italian in SBK history to win the world title

4. I have the hottest chick as my companion, and this helps! (referring to his current companion Eleonora Pedron, an ex-Miss Italy, seen above doing a fine job of making Aprilia’s Scarabeo scooter look good)

5. Enzo Ferrari was wrong, in a big way… (The F1 constructor famously said, “When a driver becomes a father, he loses one second a lap.”)

6. I will never stop thanking Ducati for their refusal to sign me in 2009

7. Aprilia and Piaggio are my second family

8. Becoming a father has given me exceptional motivation

9. At well past 39 years of age I can still keep everyone else in line

10. I owed it to all my fans and the Italians