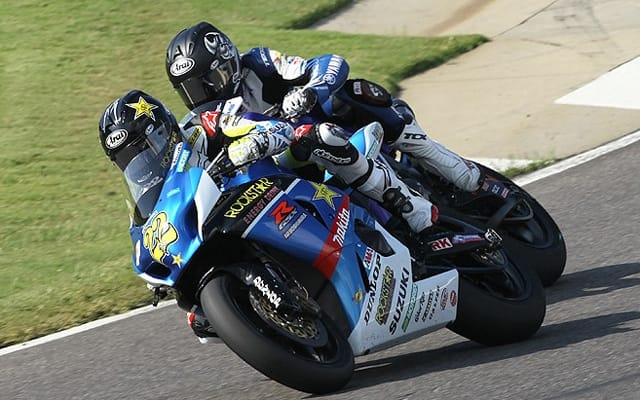 Blake Young won the final race of the AMA National Guard Pro Superbike series at Barber Motorsports Park in Birmingham, Alabama on Sunday, but it was Team Graves Yamaha rider Josh Hayes who prevailed this weekend to win the championship by a 14 point margin over Rockstar Makita Suzuki’s Tommy Hayden. Hayes finished second behind Hayden on Saturday meaning the Suzuki rider still had a slim chance at the title the next day in the season finale. But Hayes’ conservative seventh place finish on Sunday was all he needed to hold on to his spot atop the standings, as Hayden could only manage fourth on a rain soaked track. Hayes was the runner up in the 2009 championship. This is his  first American superbike title and the first for Yamaha since 1991.

Canadian Brett McCormick had a disappointing weekend to end to his first AMA superbike season. The Jordan Suzuki rider came together with Attack Performance Suzuki’s Eric Bostrom during a battle for fifth on the last lap of race one. McCormick managed to finish tenth and Bostrom 12th. A leg injury suffered during the incident ended Bostrom’s season prematurely, while McCormick made to the final contest on Sunday but ended his season by crashing out in front of Hayes while running seventh (Hayes had to run onto wet grass to avoid disaster). Still, it was an impressive run for the Saskatoon teenager, who began the year at Daytona with a self funded ride and then replaced the injured Aaron Yates on the Jordan team from round two on, to ultimately finish 9th in the championship standings. It will be interesting to see where he ends up next year.