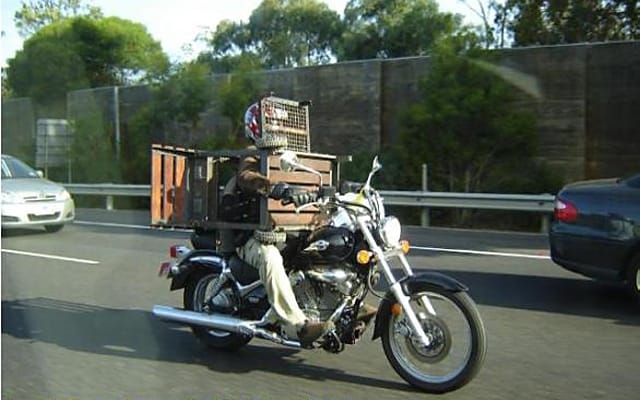 New Zealander Michael Wiles, has been fined for riding his motorcycle along Melbourne Australia’s Eastern freeway while ensconced in a barbecue. A passing motorist snapped a photo of Wiles aboard his motorcycle looking through the grill of a barbecue he’d found abandoned on the side of the road.  Needing an outdoor grill at home, Wiles was reluctant to leave the barbecue behind and decided to figure out a way to transport it on his motorcycle. Not only was Wiles charged with careless driving after the aforementioned photo was published in the media, but it turns out the grill was a dud—perhaps the reason it was abandoned to begin with.

If you’ve ever travelled to a developing nation, you may have noticed all manner of things being carried on single track-vehicles—including families of four on 50 cc scooters—but the last time we checked Australia is considered by most to be a first world nation; certainly the court magistrate who handled Wiles’ case thinks so. He was not impressed by the New Zealander’s third world motorcycling argument and handed him a $800 AUD ($748 CAD) fine—enough to buy a premium quality outdoor grill.

Afterwards Wiles was asked to shill for retail chain Barbecues Galore. He declined the offer.