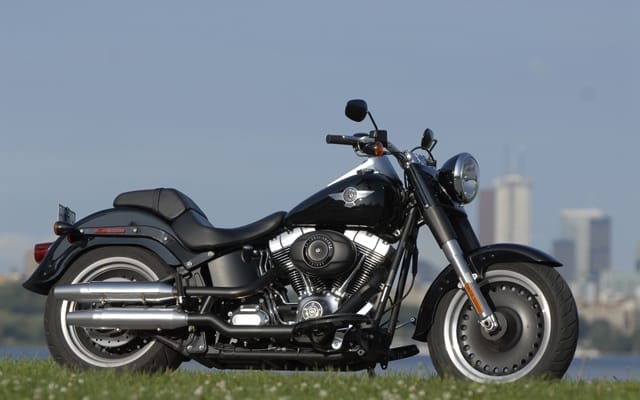 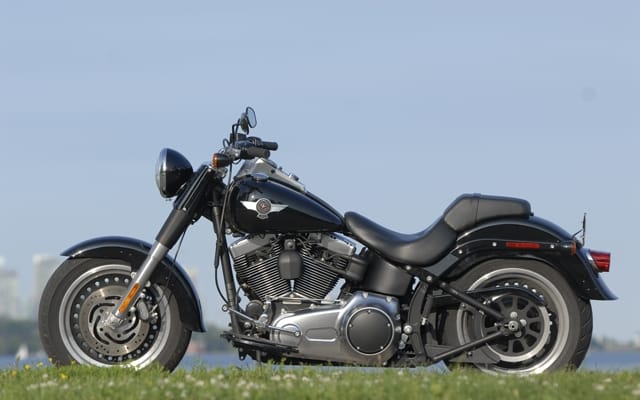 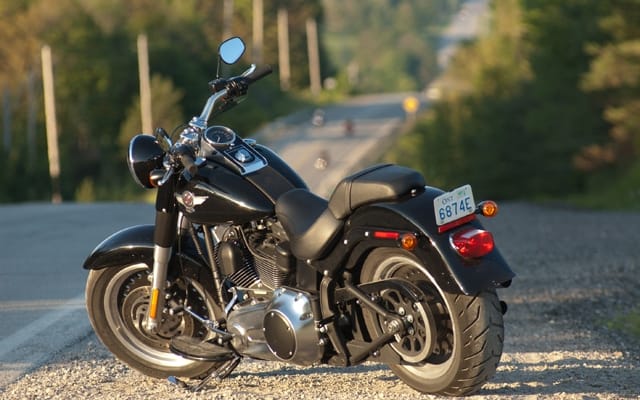 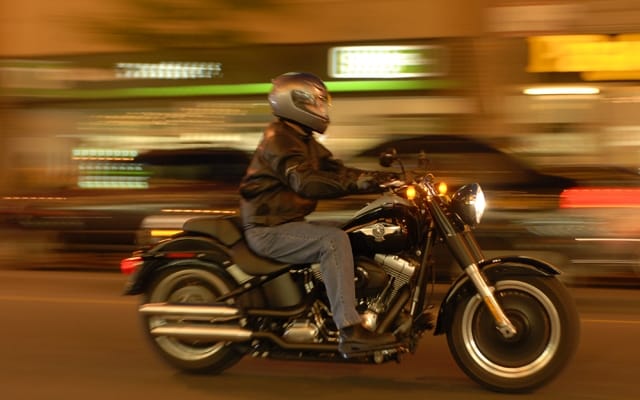 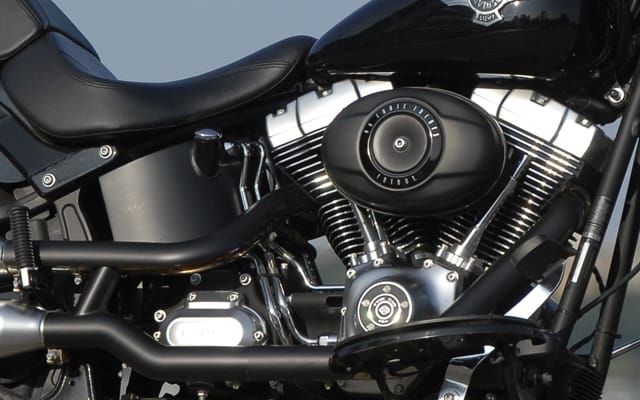 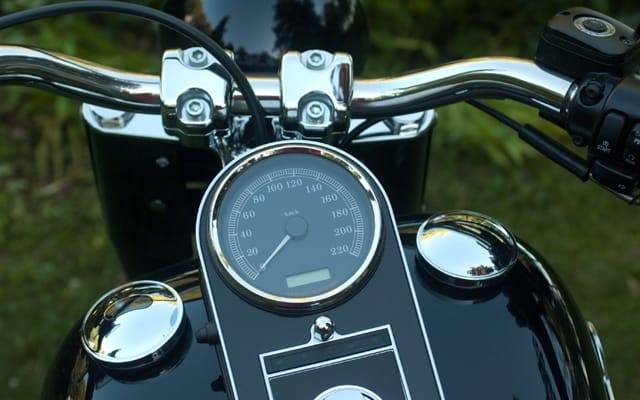 The Fat Boy Lo, it must be said, is an attractive motorcycle, despite a name that would be ridiculous even if it weren’t a misspelling. Although the bike is low, it does not appear to be fat. It has, in fact, the pleasing visual qualities of muscularity and symmetry: its form is organic and flowing, the fuel tank slope gliding into the downward angle of the seat-front, that line then spooning into a righteous upward curve, then cutting sharply back for the passenger seat. It’s the outer line that catches the eye, and that line, determined by Harley’s faux rigid-frame Softail chassis, makes sense the way the lines of a stallion or a Spitfire make sense. Nothing is too big, too small, or out of place. There’s nothing flabby or weak, and it is ostentatiously (though not annoyingly) masculine.

Then there’s the motor: there is no more visually attractive angle in which to make the V of two cylinders than 45 degrees. It’s a matter of balance and presentation: you can see the damn things, and they fit the hole that they occupy. And this is, after all, a Harley-Davidson. Tradition dictates that form will lead, and function will follow, at an obedient distance.

But function is what you ride, and fortunately, the Lo-Fat Harley performs reasonably well. The rigidly mounted but effectively counter-balanced Twin Cam 96 churns out gobs of torque at low engine speeds and runs through the rev range with a flat power output that gets the bike moving up to highway speeds quickly, but that runs out of steam at lofty revs. What those revs are is hard to say, because there’s no tachometer on this bike, but if you hold the throttle open in first gear, the limiter hits at around 70 km/h.

That won’t likely affect many riders, because there’s no reward for holding the throttle open and screaming the engine. With almost 94 lb-ft of torque available at 3,000 rpm, according to Harley, there’s no need to explore the upper reaches of this motorcycle’s powerband.

There doesn’t seem to be a need for exploring the upper reaches of the smoothly shifting transmission, either.

Thumb the starter button, and the motor catches with a bang that suggests that a huge amount of fuel and air has just been sparked up. It immediately relaxes into a characteristic Harley throb, and then responds quickly to throttle movements, even before it’s warmed up. It feels refined, despite its explosive initial retort.

The clutch lever takes little effort, and the clutch engages smoothly. The Fat Boy Lo, like most big-motor Harley-Davidsons, is a cinch to ride at low speeds. It’s a double cinch, in fact, because it handles low speeds in a balanced and natural manner, and even a short rider’s feet will always be within reach of the ground—both of them, at the same time. You do feel the weight of the bike when you lift it off the sidestand, but once rolling, the mass becomes less evident, unless you’re applying the brakes.

The Fat Boy Lo’s handlebar is wide and comfortable, providing good leverage, and an enthusiastic rider might be tempted, once up to speed and having done away with all that apparent mass, to get a little sporty. It would be wise to remember the Lo part of the name, however, because it doesn’t take much sportin’ behaviour to get those annoying footboards protesting loudly on the pavement. You can almost lean forward, despite a feet-in-front sitting position. Perhaps more so than any other motorcycle, Harley-Davidsons impress their body image to the rider, and this one (again, despite its name) appears slim and muscular. You feel like you can honk that thang into a corner. But don’t.

On straight roads, the footboards don’t become a problem until that sixth gear becomes useful. At speeds above about 110 km/h, the boards place a rider’s feet and legs at an angle that catches the wind, and on long rides, the thigh muscles get a workout as the rider fights to keep the feet in place. The arms get an even more intense workout as they struggle to keep the rider from being blown off the back end of the motorcycle.

For such a heavy bike, the brakes are a liability. While feedback through the forks and wheels is in general good, the rider’s connection to the front wheel becomes numb when the brake is applied. And even a strong squeeze results in only a mushy slowing of the bike – maybe a good thing, given that you can’t really tell what the front tire is doing down there.

At the kind of speeds that the Fat Boy Lo will likely travel for most of its life in the hands of most owners – city speeds, that is – it works well. It accelerates with authority, it turns readily, and it’s comfortable. Even at moderate highway speeds, it’s a nice ride. Leave it in fourth gear and twist the throttle, and it will accelerate briskly from 80 km/h. On the long up-and-downs of Horseshoe Valley Road north of Barrie, Ontario, the Fat Boy Lo felt in its element, perhaps like a stallion running with the wind, or a Spitfire chasing down an ME109. Appealing images, all.