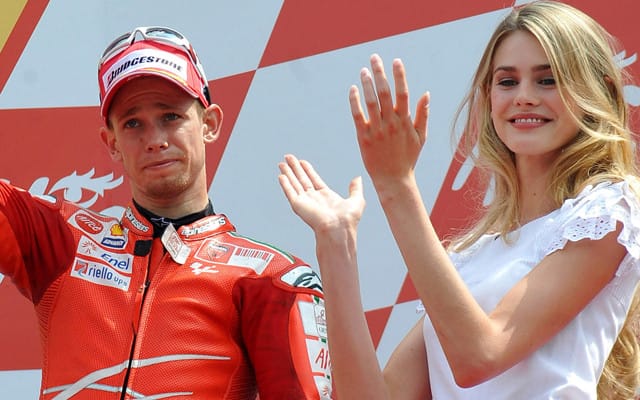 Honda has confirmed that after four years with Ducati, 2007 MotoGP champion Casey Stoner will race for the HRC factory team in 2011. Stoner’s long rumoured move from Ducati to Honda comes as no surprise—many have been reporting it as a done deal for some time now—but what is surprising is HRC’s declared intention to retain both Dani Pedrosa and Andrea Dovizioso to run a three man team. Repsol’s sponsoring condition of having at least one Spanish rider on the team seemed to guarantee Pedrosa a spot in the shuffle, but holding on to Italian Dovizioso wasn’t foreseen. Here is what HRC Vice President Shuhei Nakamoto had to say:

“We are very pleased that Casey will join Honda again next year. Clearly he is one of the top riders in MotoGP and he will bring valuable speed and experience to our team. In the factory Honda squad we already have two very strong and experienced riders in Dani Pedrosa and Andrea Dovizioso who are performing very well and currently hold second and third positions in the 2010 World Championship. HRC hopes also to retain these two riders for next year – giving us what would be a truly formidable line-up.”

Stoner rode for Honda with the LCR satellite team in 2006, his first year in MotoGP, and had this to say about his subsequent four seasons with Ducati:

“I must thank Ducati for giving me such a great opportunity to race and win with them over these past four years. They took a gamble when they signed me at the end of 2006 as I was unknown, but as we worked together we were able to win a Championship, many races and challenge for the Championship in the last two seasons. I have now decided to move on and I will have new challenges in the future and different obstacles to overcome, but I will not forget these years with Ducati and the people I have had the privilege to work so closely with. So a big thanks to Ducati and all our sponsors who we have shared success with while achieving lifelong goals”

The vacant seat now left by Stoner at Ducati further fuels speculation the defending MotoGP champ Valentino Rossi will leave Yamaha next season to fill it.