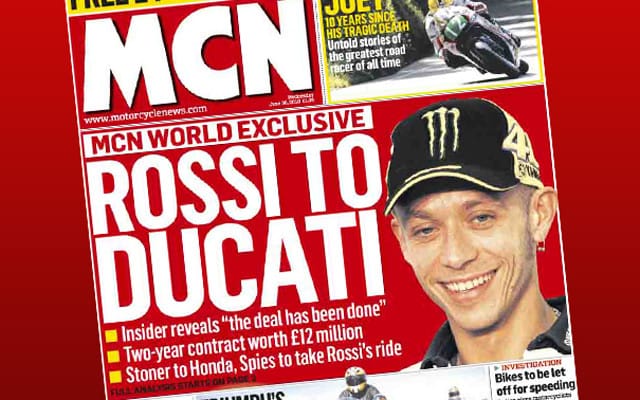 Much of the European motosport press is confirming weeks of rumours today in confirming that nine-time motorcycle racing champion Valentino Rossi will be leaving Yamaha next season for a 15 million euro deal with Ducati. Britain’s Motorcycle News has gone so far as to make it the “World Exclusive” cover story of their latest issue.

Not so fast, say other publications. UK magazine Visordown quotes leading MotoGP correspondent Mike Scott as saying there is “nothing concrete” to support MCN’s story. And Italian newspaper Gazzetta dello Sport has Ducati team boss Filippo Preziosi saying a deal is far from agreed and that Rossi still has the chance to accept Yamaha’s proposal.

Those supposedly in the know say to expect an announcement about Rossi’s future at this weekend’s MotoGP event in Catalunya, Spain.

We’ll wait to hear about his plans from the Doctor himself and let you know then.