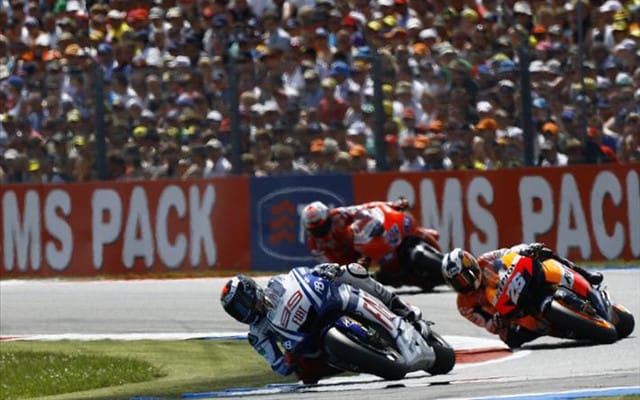 MotoGP title leader Jorge Lorenzo extended his championship lead to 47 points at Assen on Saturday by winning his fourth of six races so far this season. Starting once again from the pole position, Lorenzo had to fight off the advances of Honda’s Dani Pedrosa—who quickly moved from seventh to second—and Ducati’s Casey Stoner early on. But unlike Pedrosa and Stoner, Lorenzo was running the harder compound rear tire which allowed him to pull away during the second half of the race and ultimately outrun his fellow countryman by almost 3 seconds. Stoner held on to third place, another 4 seconds back.

“This race was a bit more difficult than Silverstone because Dani was so fast with the softer tire early on in the race and I had to really keep my concentration to stay in front of him at that point,” said Lorenzo. “I was confident that my harder Bridgestone tire would help me later on and this was the case, so we made the right choice. It wasn’t easy though and at the end I was sliding quite a lot, in fact I made a mistake at the chicane and nearly crashed so I was quite glad to finish!”