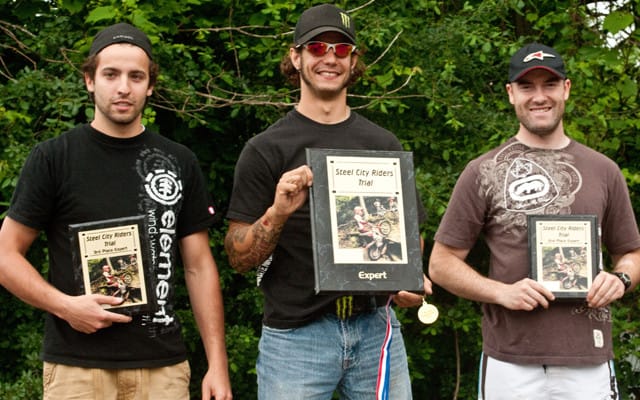 Defending CMA National Trials champion Jordan Szoke (the defending Canadian superbike and sportbike champion as well) won a shortened opening round of the season in Ohsweken, Ontario this past weekend.

Heavy rains threatened to cancel the event, but after the course was reduced from 15 to 8 sections, 40 riders did their best to keep both feet up while traversing the obstacles.

Riding through the abundant mud and water at first proved difficult for Szoke, who scored 16 of his total 21 points in the first loop. But the Brantford native persevered, acquiring only five demerits in the final three loops to take the victory by an 8 point margin over his former Trials des Nations teammate Jonathan English. Andrew Young took home third with a score of 50.

“It feels good to start off my title defense with a win,” Szoke said. “It sucks that the rain ruined some of the sections, I really was looking forward to riding them all. It was an extremely well run event and I really appreciate the hard work and effort the organizers put into it.”