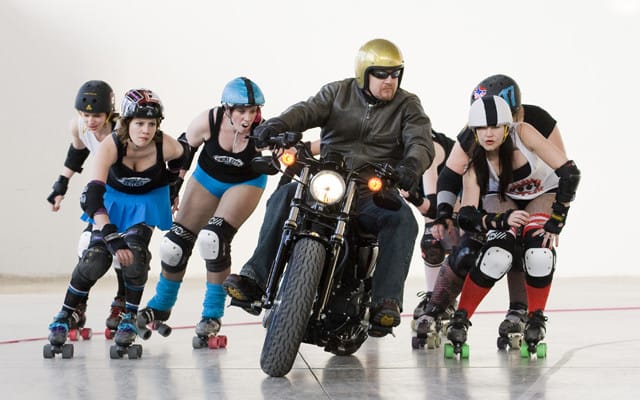 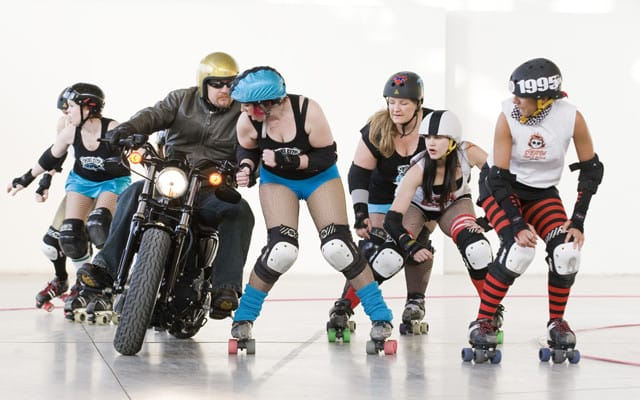 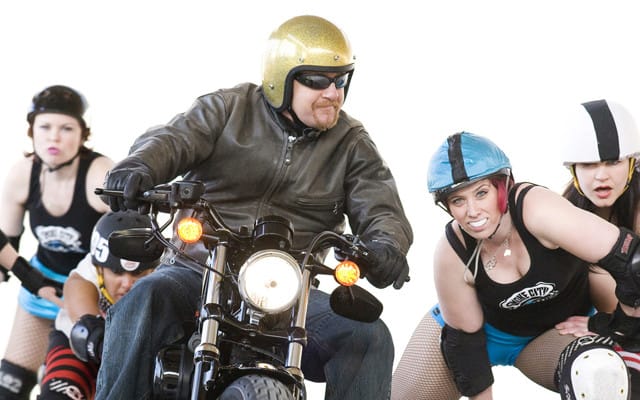 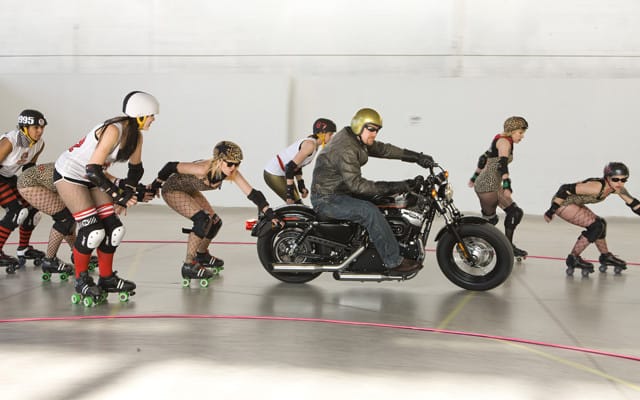 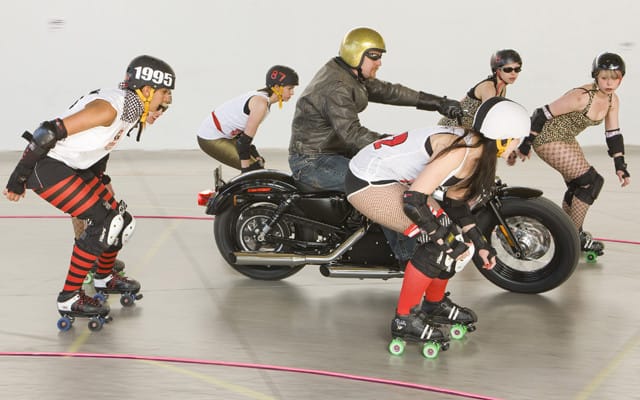 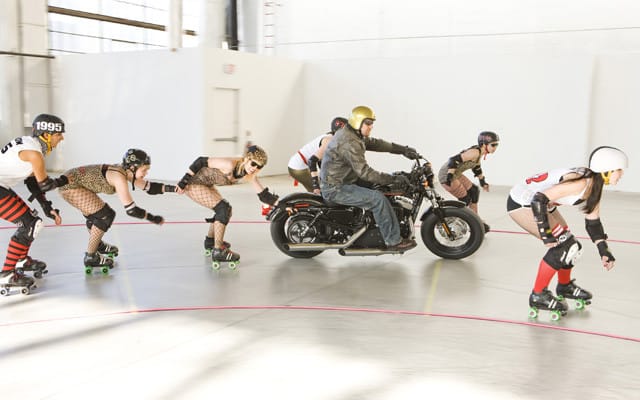 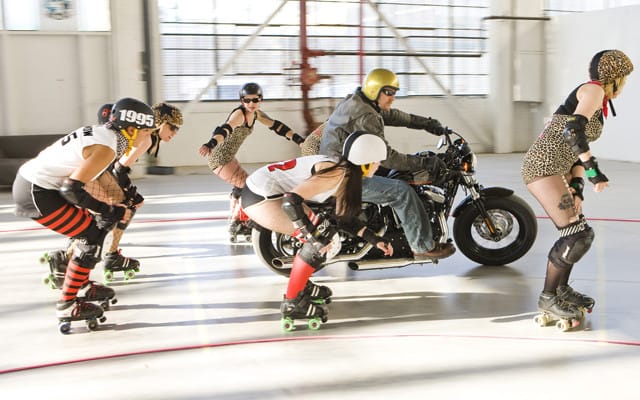 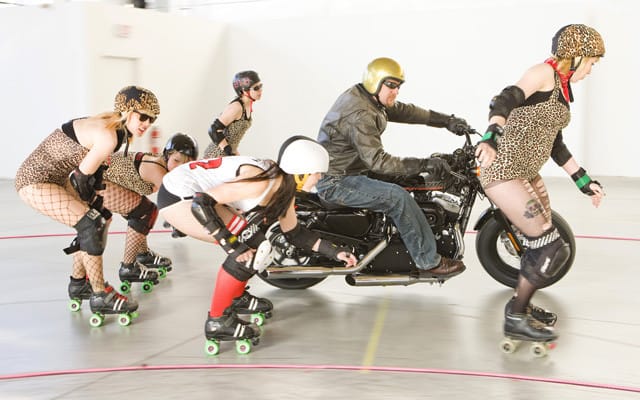 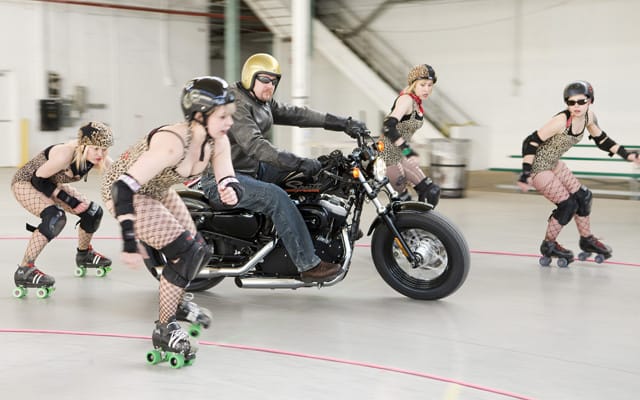 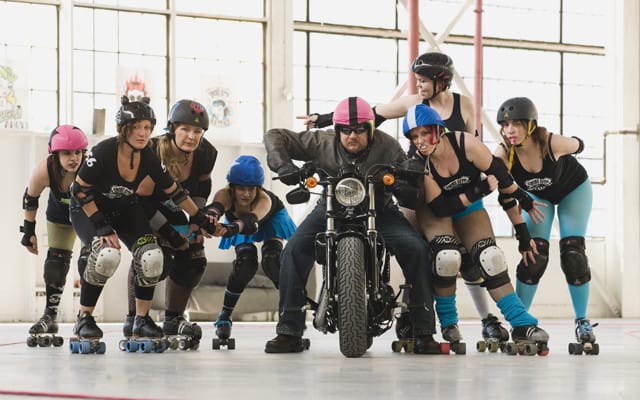 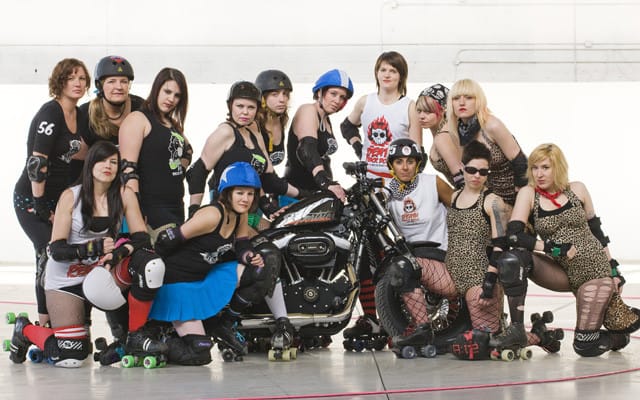 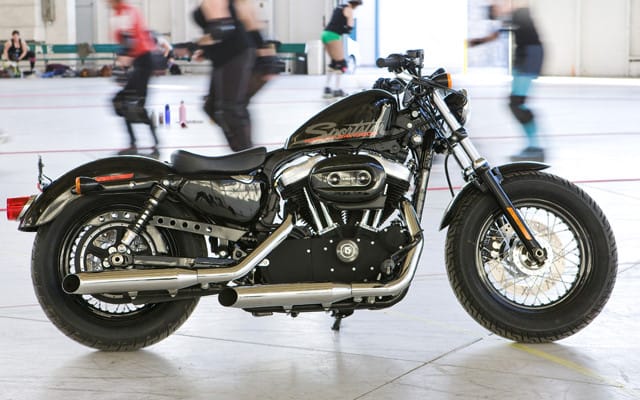 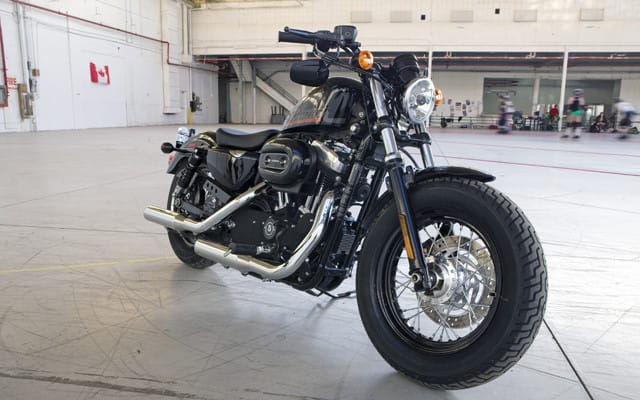 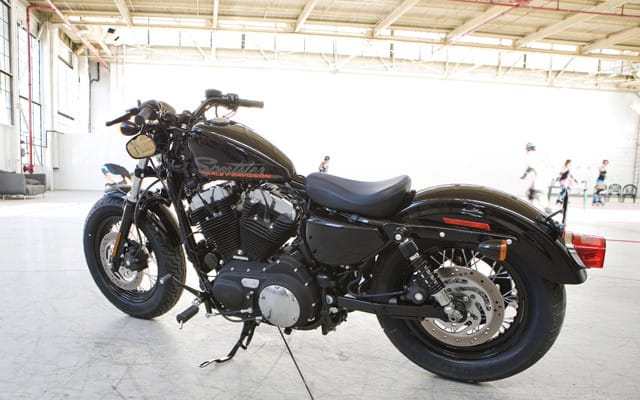 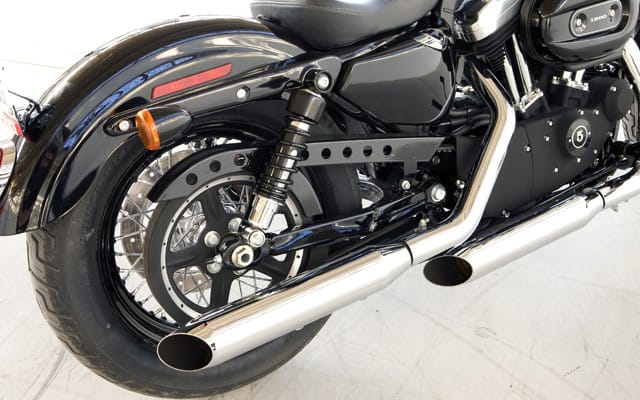 We looked at the profile of the Sportster Forty-Eight and immediately thought, Roller derby. Wouldn’t you?

Before we hit the floor with the women of Toronto Roller Derby (be sure to watch the video on the left) we hit the streets. Or the streets hit us. The hind end of the Forty-Eight is graced by a pair of shock absorbers, but the suspension is so firm that if you ride over a manhole cover you can read its embossed year of manufacture like a blind person reads Braille. The fork, too, begins life nearly fully compressed and has little left to give. It’s the price paid for the stunning profile.

The most significant addition to the Forty-Eight is the adoption of a porky 16-inch front wheel. Normally fat tires foul handling, but either the tire’s not fat enough or the rock-solid suspension cares little about what kind of rubber is employed—regardless of the reason, handling and tracking is light and direct. Sportsters are deceptive motorcycles; they look tiny and light but the first time you hoist one up off its sidestand you’ll swear that the fuel tank and the frame tubes have been pumped full of concrete. A sticker just south of the headstock on the frame’s downtube gives a clue to its mass. United Steelworkers of America, it reads, and now we understand. The metalwork on the Forty-Eight is part of Obama’s rescue plan for an ailing economy, and Harley-Davidson, patriotically doing its part, specified extra-thick, get-everybody-working-gauge material.

On another bike we might have complained about the useless mirrors (mounted, if you can believe it, under the handlebar and beneath the hands). We bobbed our heads to try and find an optimal angle for mirror deployment, and decided that a rider of average height with their head mounted underneath an armpit would approve of their location. But the reason that we’re not complaining is because the Forty-Eight is so gruesomely uncomfortable that after 50 kilometres you’ve long ago ceased to care about what might be gaining on you from the rear.

A rock-hard seat that, maddeningly, tilts slightly backwards—so it always feels like you’re falling off—joins the rock-hard suspension. Over five hours one early summer afternoon we ambled through the countryside and accumulated 190 kilometres. And it nearly killed us. We stopped three times for coffee, four times for bathroom breaks, twice at yard sales and twice for no reason at all—any excuse to get off the bike. Seats that tilt backward are great for the strengthening of abdominal muscles but unduly stress arm and neck muscles. As much as we wanted to get on the Forty-Eight, we couldn’t wait to get off it.

While our words of criticism might seem harsh, we’re supportive of Harley’s reinvestment in the Sportster lineup. The Forty-Eight, unlike most of the Sportsters built in the past 20 years, is an honest, rawedged motorcycle. It’s not a beginner bike and it’s certainly not a girlie bike. Watching Uwe Wachtendorf hustle the Forty-Eight around a track with skilled women who are not at all girlie proved that the Sportster, just like the sport of roller derby, is indeed most emphatically back.

You’ll find Neil’s additional historical perspective on the Sportster and roller derby in the July issue of Cycle Canada, on newsstands now, and for more on the women of Toronto Roller Derby, go to torontorollerderby.com