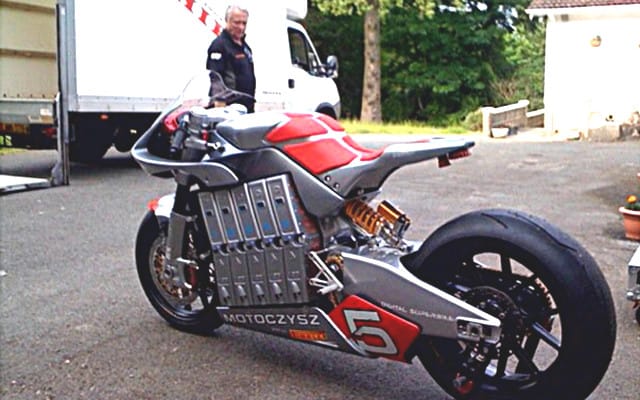 Though still under embargo, the above photo of MotoCzysz’s E1pc, taken before the first practice this past Saturday for the Isle of Man TT Zero, has been leaked to the web. It’s a cool looking machine, but judging from its performance over the weekend, there are still a few bugs to be worked out. Running out of battery charge before the finish, the E1pc only managed an average speed of 120.17 kph around the 60.7 km mountain course, while Team Agni posted the fastest lap at 136.59 kph.

According to team owner Michael Czysz there was a calibration mess up. “We communicated to the rider via on board info that we had more power than we did.” said Czysz. “We had a massive lead and our rider started using more throttle too soon and the bike ran out of bat 1.5 miles (2.4 km) from finish.”

The starting grid for this year’s TT Zero on Wednesdy will be less than half of what is was for last year’s inaugural race. Joining Czysz’s entry on June 9th are only nine other machines: Ecolve from London, Agni Racing (with two bikes), University teams Brunel and Kingston, Isle of Man based ManTTx Racing, Austria’s HTBLAUVA – XX Project, SERT (Swedish Electric Racing Team) and Germany’s Peace E Rider.

Competing e-racing series TTXGP (only 7 bikes competed at the Road America event this past weekend) and FIM’s ePower, can be blamed for the reduced turn out, but we have to wonder what the story is with Brammo and Mission, two of the bigger players in the current zero emissions motorcycle world, who haven’t shown up for any races yet this season.