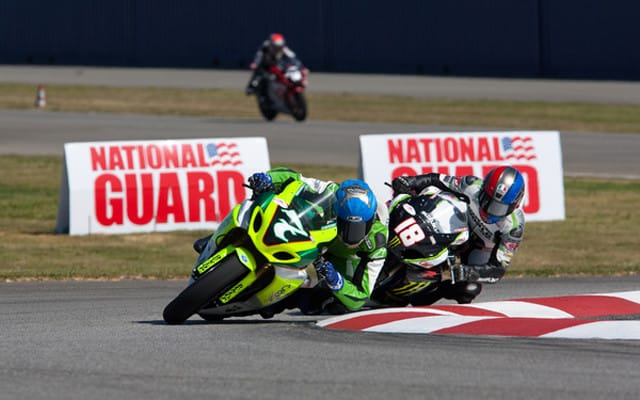 Canadian superbike star Brett McCormick sits 10th place overall in the 2010 American Superbike standings with 37 points, after riding for the Celtic Racing Orient Express team this past weekend during the series’ second round at Auto Club Speedway in Fontana, California.

A last minute replacement for injured Celtic racer P.J. Jacobsen, the 18 year-old McCormick began the weekend unfamiliar with both the Fontana track and the team’s Leo Vince powered Suzuki GSX-R1000. Spending his day 1 qualifying laps getting himself acquainted, McCormick finished the day 17th on the grid—a situation he and his team hoped to better during qualifying session two. Dangerously high winds on Saturday morning though forced the second qualifying to be cancelled and left the Canadian in his fourth row starting position and the Celtic racing team unable to continue tweaking the bike to the new rider’s specifications. All the same, McCormick was able to push his less than ideally setup machine to a 12th place finish in Saturday’s feature race.

Further mechanical adjustments Sunday morning paid dividends in race 2 later that day. Immediately moving up from his 14th place starting position and challenging inside the Top 10, McCormick soon found himself in a battle with AMA veterans Ben Bostrom and Chris Ulrich, a battle that would extend throughout the entire contest. At races end the Fontana rookie would find himself in 7th position, his best AMA Pro Racing American Superbike finish to date. His best laptime during the race (1:25.427) was less than a second off the best lap of either race (Blake Young – 1:24.428)

“That was certainly a wild weekend.” said McCormick “We knew coming in that it would take a bit of time to get everything going since it was a new track and my first race with the Celtic team. We were bummed to lose out on Saturday’s practice but AMA made the right call since it was pretty bad out there with the wind. Anyhow we were off on setup during Race 1 and that made for a long race. I knew we could go faster in Race 2 and after some changes Sunday morning we did just that. It felt real good to finally get down to some laptimes I knew we were capable of. I had a good battle with Ben and Chris and to come out with my best AMA Superbike finish at the line is just icing on the cake. A big thanks to the Celtic Racing team for all the hard work and the opportunity to race hard this weekend. I can’t wait to get back on the racetrack.”

Round 3 of the AMA Pro Racing Championship takes place at Road Atlanta in Braselton Georgia on April 16th. It’s not clear though whether McCormick will be racing there.