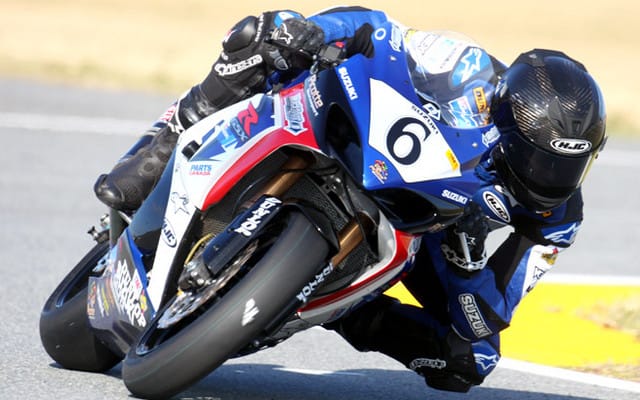 McCormick Looking for Sponsors after Daytona

All things considered Canada’s 18-year-old Brett McCormick had a strong showing at Daytona International Speedway this past week. Arriving on a shoe-string budget with his TK Picotte Racing Suzuki machines set up for Canadian spec and underpowered compared to his US rivals, the runner-up in the 2009 Parts Canada Superbike Championship was able to qualify his GSX-R1000 in 9th position for the Superbike competition and his GSX-R600 in 8th for the 69th running of the Daytona 200.

As for the actual races, the Saskatoon native was only able to finish one of three. In the 2010 AMA Superbike series opener on Thursday, won by Jordan Suzuki’s Jake Zemke, McCormick found himself battling it out early on with the M4 Monster Suzuki of Chris Ulrich for sixth spot. Unfortunately a mechanical problem on lap 6 of 15 put an end to the Canadian’s promising start. The week’s second superbike race on Friday, also won by Zemke, saw a more satisfying result for the sole Canuck entry, with McCormick placing a strong 8th amongst the higher powered factory American entries.

“I guess you could say I’m content, we did a good job,” said McCormick. “I was there, I was right with the leaders. But I couldn’t afford any kind of mistake, or I would lose their draft. Then John Hopkins went by me, he went off the track, and I made a small mistake – I lost touch.”

“I tried to make it back up but I couldn’t. Eventually the rear tire was pretty gone on the left side, and we just didn’t get a chance to work that tire in our limited practice. My gearing choice might have been a little tall, but in the end, I’m really happy with the effort. We weren’t far off.”

The Daytona 200, Friday night’s feature under the lights, saw the TK Picotte Suzuki rider starting the race on the second row and joining the lead group from the start. A slow pit stop later dropped him off the pace, but McCormick was still in the running for a strong result until he crashed at the chicane on lap 31 of 57. Though able to remount and continue, damage to his GSX-R600’s brake system forced McCormick to retire from his inaugural 200-mile effort— a bitter pill after a promising week at the legendary Speedway.

“I was pretty much through the corner when I fell,” said McCormick of the crash. “I just tucked the front end as I released the brakes. I wasn’t doing anything different, nothing had happened before in that section, so it was a surprise. The bike was really awesome, the best it had been during Speed Week. “I could slide it wherever I wanted, it was sick.”

“Maybe our bike was lacking just a little bit against the American equipment in terms of power, but it was close,” he added. “I had to be right there with them in the draft, and use the brakes to my advantage in a big way. But I could get them in the infield by using my mid-corner speed, reel them back in.”

“I really was thinking, if we could get a good pit stop, we could win this thing,” lamented McCormick. “This could be our race.”

As for what he plans to do now that his self funded Daytona effort has come to an end, last year’s Parts Canada Superbike Championship runner-up says he once again finds himself a loose ends.

“I guess you should say we’re looking for sponsors, some support,” admitted McCormick “Right now I’m out of my money, so we need some people to get on board. I can’t say enough about Pascal and the whole team – seriously, we were right there.”