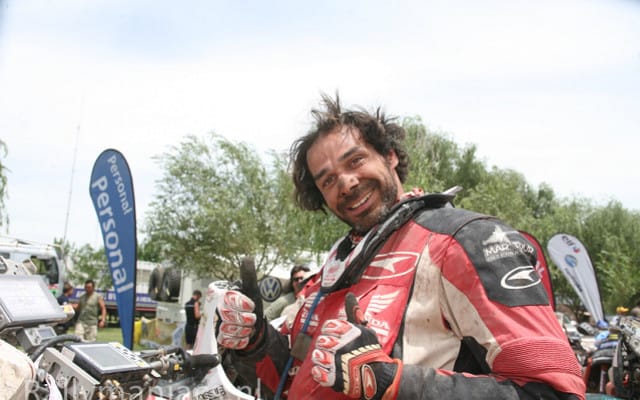 Exhausted yet elated, Patrick Trahan crossed the finish line on his Honda CRF 450X yesterday in Buenos Aires, finally completing the grueling desert odyssey know as the Dakar Rally on his third try, after failing during two prior attempts in Africa.

“As you know now, my dream is complete fact. At 15, I told myself that someday I will do the Dakar. 10 years ago, I realized that dream and now 10 years later, I ended my dream. What emotions!,” wrote Trahan in his blog.

In his last two posts, the Montreal native seemed delirious with fatigue, making numerous comments about falling asleep on his bike in the final stages of the raid. He perservered to the end though, finishing 55th out of the 88 riders that remained and becoming only the fourth Canadian in the rally’s 32 year history to collect a finisher’s medal.

The Chilean was extremely satisfied with his first ever Dakar attempt, saying, “As a rider of course I am very happy about this Dakar edition. I worked all year to get a good result. In this edition, there were a lot of very experienced riders like Marc (Coma) or David (Casteu). But we know the race; it leaves people by the side of the road. Others have mechanical problems: the tires or the chain as was the case for me. A Dakar raid is all of that at the same time. It’s the sum of many things. In the end there are three riders on the podium and I am one of them! We fought hard with Pal (Anders Ullevalseter). Then I decided to leave it thinking that third place was not bad at all. Of course, being second is even better but trying to win a place and lose the podium all together, no way! So yesterday night we decided to play it safe with the bike, the tires… The podium is a victory for my family, my friends, all the Chileans who supported me. I would like to thank my family. One day I told them: “I don’t want to study. I want to ride bikes” and they said: “Go for it! It’s your passion!” And here I am on a Dakar podium. I have achievements. I have a career! I will tell you what I think at the bottom of my heart: I took a great decision committing with Aprilia. Everyone was telling me I would never finish a Dakar on a brand new bike. With only three months preparation, I rank third! But it must be said that the team was great. The Chileans and the Italians got along really well. Next year, I am sure we will have an even better bike.”

For more details, watch the video below.